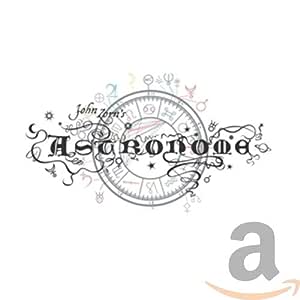 Share
Listen Now
Go Unlimited
Start your 30-day free trial
Your Amazon Music account is currently associated with a different marketplace. To enjoy Prime Music, go to Your Music Library and transfer your account to Amazon.com (US).

Zorn continues his intense new rock direction with a second release by the dynamic all star trio from his acclaimed song suite Moonchild to present an intense and mysterious tale of magic and alchemy. Featuring the mad vocal wizardry of Mike Patton singing in preverbal language accompanied by long time cohort Trevor Dunn on electric bass and Joey Baron on drums, this is Zorn at his edgy and uncompromising best. An opera of unbridled madness and complexity that will make your jaw drop. Recorded and mixed by the radical posse of musical terrorist Bill Laswell.

Michael Stack
VINE VOICE
3.0 out of 5 stars 3 1/2 stars-- an opera in vocalese.
Reviewed in the United States on October 25, 2006
"Astronome" is the second album by the band John Zorn assembled to record "Moonchild"-- vocalist Mike Patton, bassist Trevor Dunn and drummer Joey Baron. But this time the concept is slightly different, Zorn was challenged by Richard Foreman to compose an opera in vocalese and came up with something altogether unexpected. Not for the feint of heart, "Astronome" is, even for Zorn, quite a challenge.

As any opera, "Astronome" is apparently designed to tell a story, although you'd be hard pressed without the included libretto (more on that in a minute) to make heads or tails of it, the music is very visual. On first listen, it appears to be pretty much an endlessly aggressive slice of Zorn-avant-hardcore, but the more I've listened to it, the more it's revealed itself to be startlingly diverse. While it is indeed dominated by fierce sections, there's quite a bit of oddly melodic and intriguing portions here-- for example about thirteen minutes into "Act Two", after building to frantic heights, the music settles into a fine groove and maintains a gentle atmosphere pretty much until the end of the track with Dunn's playing both deep in a groove and at times downright pastoral in sound.

This isn't to say, mind you, there isn't a healthy dose of noise and explosiveness-- Dunn's bass is distorted more often than not and Patton's range of vocal textures seem to emphasize a sense of franticness and torment more than anything else.

One thing of note is the packaging of this record-- contained in a small box, the CD is accompanied by two booklets-- one with a set of liner notes by Zorn the other a libretto for the album, with photographs accompanying each "scene" in the opera. It's really quite a fine package.

As a whole, while I found "Astronome" to be an interesting record with a lot of great material to offer, I've found it a bit less intriguing than "Moonchild" and haven't been coming back to it as consistently as I do with a lot of Zorn's other albums. Having said that, it's got a lot to offer and I'm curious whether my opinion of it will change over time-- there's an underpinning of subtlety here that isn't obvious on first dozen listens or so that I've noted as of late that I wonder if it will blossom into something more (as "The Gift" did for me).

Geoffrey R. Balme
5.0 out of 5 stars DEATH JAZZ anyone?
Reviewed in the United States on February 1, 2007
Lyric-less vocalizations (sounding much like a muppet hyped on amphetamines) replace the usual lead horns, or guitar work. The musicianship is first class, wildly sweeping in it's complexities and easily able to keep your attention.

At first, I laughed at the slurping sucking noises the vocalist was making thinking it was much like the embarassing noises section of a Monty Python routine - but, it's easy to forget that it's a human generating those noises and just think of them as instrumentation.

It's certainly genre stretching, and a lot of fun.

It's a very warm interlude between exhausting vocalizations that seems much needed!

get ready it's all about to take off again!
Read more
2 people found this helpful
Helpful
Comment Report abuse
See all reviews from the United States

M. Hutchinson
3.0 out of 5 stars Much Harder Work Than Moonchild...
Reviewed in the United Kingdom on June 22, 2007
Verified Purchase
This work is described by Zorn as an attempt at a versatile "pocket opera", equally at home in a classical environment as at a rock venue.

The musical themes lead very directly off from the previous disc, the opening bass-line harking right back to 'Hellfire' and the playing is, again, superb.

However, for my money, this is a much less cohesive and comprehensible affair; trading the concept in many places for the concise and ideas-packed music of Moonchild.

The vocals on this are particularly wearing at times (the slurping and gargling of a glass of water towards the end of track two is just gross and not atmospheric at all).

The music develops slightly slower, and in places is much more sparsh, but the atmosphere is never quite as convincingly captured, and it never gets quite as scary.

I would get Moondchild over this, then return here if you still want more of the same later.
Read more
3 people found this helpful
Helpful
Sending feedback...
Thank you for your feedback.
Sorry, we failed to record your vote. Please try again
Report abuse

Page 1 of 1 Start overPage 1 of 1
This shopping feature will continue to load items when the Enter key is pressed. In order to navigate out of this carousel please use your heading shortcut key to navigate to the next or previous heading.
Back
Next
Pages with related products. See and discover other items: john zorn