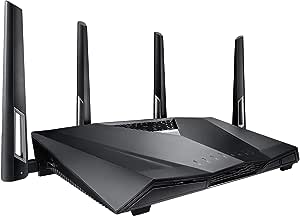 The ASUS CM-32 combines a DOCSIS 3. 0 32x8 cable modem with an AC2600 Wi-Fi router powered by an Intel Puma processor to deliver full bandwidth performance and wireless coverage without monthly rental fees. Dual USB 2. 0 allows you to share printers and external USB drives, including remote access via a I cloud.

3.9 out of 5 stars
3.9 out of 5
745 customer ratings
How does Amazon calculate star ratings?
Amazon calculates a product’s star ratings based on a machine learned model instead of a raw data average. The model takes into account factors including the age of a rating, whether the ratings are from verified purchasers, and factors that establish reviewer trustworthiness.

Dale Gribble
5.0 out of 5 stars Works well with Comcast's Xfinity Internet, UPDATED
Reviewed in the United States on February 21, 2017
Size: 680 MbpsStyle: Cable modemVerified Purchase
I was switching internet to Comcast Xfinity and decided to purchase my own cable modem to avoid the $10 a month rental fee. Initially I was looking at an all in one router combo, but decided it would be in my best interest to purchase a separate router and cable modem. The issues I found after researching are that a lot of those all in one units have problems with the wireless degrading over time and they're expensive to replace. The biggest issue is that cable modem firmware is not controlled by the end user or owner, the cable company is the only one who can upgrade it. Therefore you can not apply your own patches and fixes from the manufacturer.

With that out of the way I ultimately decided to purchase this Asus CM-16 16x4 cable modem due to price and the fact that the 16x4 Arris Surfboard SB6183 has a few crazy reviews. Apparently the Arris Surfboard SB6183 runs extremely hot and sometimes gives off a nasty burning smell. This modem was going to be in my living room and regularly around young children so I opted to try this Asus CM-16 cable modem.

The tech who installed cable services to my house called in to have the modem provisioned and initially they tried to tell him that the modem was not an approved device, but backed down once I told them it was on their approved list of devices. Once it was provisioned, about 3 resets later and I was up and running. The technician complimented me on the modem twice saying he could not believe how quickly it rebooted and came back online. He said their normal modem they provide usually takes about 5 minutes to reboot and resync, while this Asus CM-16 was taking about half that time.

I've only been using the modem for 24 hours now, but so far it is providing the internet speeds I am paying for and it is not putting off much heat at all. I paired this cable modem with an

::Update 1 - 3 Weeks::
I've been using the ASUS CM-16 16x4 Cable Modem for 3 weeks now. Other than once when there was a Comcast outage in my neighborhood, it has worked perfectly. I have not reset the modem at all yet and there is no crazy heat or funny smells. The cable modem is barely even warm every time I've touched it, even when it's downloading large Xbox One games or updates. So far I am very happy with my cable modem purchase.

::Update 2 - 2 Months::
We still have not had any major issues with this Asus cable modem. We've lost power a few times one night, but it worked fine once the power was back up. It still is barely warm to the touch, silent, and quick to reconnect to Xfinity. The LED lights are a little on the bright side some nights, but they do not seem to bother my kids in their rooms.

::Update 3 - 3 Months::
Still going strong. I did reset my router and cable modem the other day because I was having some difficulty with the internet. Everything came back up though.

::Update 4 - 13 Months::
Over the past year I've reset it 3 times I believe. Once there was definitely something going on, because the internet came back up afterwards. Still no issues with heat or smells. Extremely happy with my purchase.

I did NOT get this modem at a discount for my opinion or any of that garbage.
Read more
233 people found this helpful
Helpful
Comment Report abuse

Paul
1.0 out of 5 stars Insecure, Buggy Router / Modem Combo.
Reviewed in the United States on September 15, 2018
Size: 2534 MbpsStyle: Cable modem&RouterVerified Purchase
The idea of this router is great. ASUS Router with a built-in cable modem. However in its execution it is a failure. Because it has a cable modem, ASUS will not keep the Firmware up to date. According to ASUS site, "cannot be installed any drivers by yourselves. The default setting, function and application cannot be changed."

The router came shipped with ASUS Firmware version 1.0.1.5. The current version is 3.0.0.4.384_20287 . AUSUS's site tells you that there is no way to update the firmware. I encountered some problems configuring the VPN Client on the router and the only solution from the web is to be on a more current version of firmware which is impossible. I regret wasting so much time trying to get this product to work.
Read more
80 people found this helpful
Helpful
Comment Report abuse

GothyStitch
5.0 out of 5 stars I can't say enough good things about this... and only 2 negatives!
Reviewed in the United States on February 8, 2018
Size: 2534 MbpsStyle: Cable modem&RouterVerified Purchase
After spending 2.5 years dealing with the crap modem from Comcast/XFinity, I finally took the leap. After reading up for a couple weeks on which cable modem/router combo would be best, I narrowed the list down to 2 different items. On the model that Comcast/XFinity "leases" to me, I very rarely got transfer speeds anywhere near the 125Mb/s that I was paying for. I was averaging almost half of that, at 59.78Mb/s. According to Comcast, it was due to the amount of people in my area that were using their internet service. After disabling the "guest" account that Comcast forces on people (yeah, they say it doesn't affect your speeds, but they lie) the average improved to almost 70Mb/s, but still no where near the 125Mb/s. Enter the ASUS CM-32...

Honestly, the setup out of the box was extremely simple... plug it in, attach the coax to the back, wait about 5 minutes and then log into the device and go to Comcast's activation site, enter my account info and wait a few minutes again. While it was simple, ASUS' instructions were incorrect... they stated to go to "router.asus.com" but apparently that is no longer the supported method. Having experience with this, I immediately entered the IP address of the device (mine defaulted to 192.168.1.1) and boom, the initial setup screen appeared! After it was all said and done, the process from start to finish took all of 20 minutes!

Holy transfer speeds batman! I spent most of the first day running speed tests every hour or so and I'm averaging 117Mb/s... effectively double what I was getting using the default equipment from Comcast. Internal network performance has vastly improved as well (I have 1 computer, a NAS, 2 tablets, 2 smartphones, a PS4, and a Smart TV connected) with no noticeable drop in transfer speeds while streaming Netflix or utilizing Plex. While I haven't been running this device for a long duration, it's already out performing Comcast's equipment to the point that I will NEVER again "rent" from them.

There were 2 minor issues... the first, like I said, the instructions were slightly incorrect with how to connect to the device. The second issue, and this is kind of nit-picky... there were a couple of typos in the setup screens (siNg instead of sigN being the most prominent).

I'm definitely impressed with the ASUS... from how easy it was to connect and setup to how well it performs. This is definitely one solid device. If you are looking to move away from Comcast's craptastic equipment, I would whole-heartedly suggest that you bite the bullet and purchase this device.
Read more
77 people found this helpful
Helpful
Comment Report abuse
See all reviews from the United States

Victoria
5.0 out of 5 stars Five Stars
Reviewed in Canada on June 4, 2018
Size: 2534 MbpsStyle: Cable modem&RouterVerified Purchase
super fast shipping, arrived in perfect condition, and great value. Thanks. will be back.
Read more
Helpful
Sending feedback...
Thank you for your feedback.
Sorry, we failed to record your vote. Please try again
Report abuse

Page 1 of 1 Start overPage 1 of 1
This shopping feature will continue to load items when the Enter key is pressed. In order to navigate out of this carousel please use your heading shortcut key to navigate to the next or previous heading.
Back
Next
Pages with related products. See and discover other items: Computer Input Devices, Computer Networking, Computer Networking Modems, Audio Cables, Modem Cables, Best cable routers for comcast