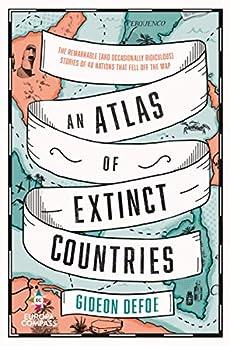 by Defoe Gideon (Author) Format: Kindle Edition
See all formats and editions
Sorry, there was a problem loading this page. Try again.
Read more Read less
Previous page
Next page
Due to its large file size, this book may take longer to download

★ “This book is a sparkling gem.”—Booklist (Starred Review)

“Defoe brings a light touch to this unique collection... The author’s superior talent for vivid similes and punchy writing do justice to the tales of megalomaniacs and fools. This is perfect for fans of Atlas Obscura.”—Publishers Weekly

“Both educational and entertaining, An Atlas of Extinct Countries is an irreverent look at the history of defunct nations and the larger-than-life personalities behind them.”—ForeWord Reviews

“As fun and light-hearted as Defoe’s writing seems on the surface, there’s always a comment being made. Great fun.”—The Independent

“Defoe keeps things moving along and has a winning proclivity toward footnotes—where he does some of his best writing—and nonsensical asides.”—Kirkus Reviews

“Equal parts satire and farce as if written by Monty Python, Defoe skewers everyone and everything in a laugh-out-loud performance.”—Publisher’s Weekly

“One of the biggest joys in my life this year, stuffed with witty one-liners and good-humored observations on the human condition.”—Sacramento News & Review

“Throughout the book, Defoe manages to mix nonsensical jokes with subtle social commentary… Equal parts witty and absurd, it will put a smile on the face of even the stiffest reader.”—Memphis Flyer

“Not just a recitation of nations that no longer exist, An Atlas of Extinct Countries is a very pointed and very funny critique of nation-states, borders, and the flawed men who make them....a timely cautionary history.”—Lesley Rains, City of Asylum Bookstore (Pittsburgh, PA)

Gideon Defoe is the author of The Pirates! book series and wrote the screenplay for the Oscar nominated Aardman film The Pirates in an Adventure with Scientists. He has written about how animals have sex and penned a computer game tie-in novel for Gollancz. He does film development work with Locksmith Animation and Studio Canal, and is developing a sitcom with BBC studios.

4.5 out of 5 stars
4.5 out of 5
310 global ratings
How are ratings calculated?
To calculate the overall star rating and percentage breakdown by star, we don’t use a simple average. Instead, our system considers things like how recent a review is and if the reviewer bought the item on Amazon. It also analyzes reviews to verify trustworthiness.

Patricia Gibson, Ed.D.
5.0 out of 5 stars A light read, delighful!
Reviewed in the United States on November 3, 2020
Verified Purchase
This well researched, and illustrated book is a fast read and an enjoyable one. A fun introduction to some obscure events in history and some oddities of well known history, it will entertain. The reading level is such that it could be a good gift for teenaged children, especially those who need a nudge about studying history and geography.
PKG
Read more
4 people found this helpful
Helpful
Report abuse

Jamie Melton
5.0 out of 5 stars Loved this book
Reviewed in the United States on October 25, 2020
Verified Purchase
I loved reading this book. Was very hard to put down once I opened it. It’s well worth the 5 star rating.
Read more
3 people found this helpful
Helpful
Report abuse

Amazon Customer
5.0 out of 5 stars Well worth the read
Reviewed in the United States on October 13, 2020
Verified Purchase
I'm not much for listening to CNN when they review a book, but this is by far one of the best reads I have had. Call it the definition of a conversationalist piece--it will not disappoint with not only the facts but the witty sarcasm and humor that many of these extinct countries deserve.
Read more

5.0 out of 5 stars Well worth the read
By Amazon Customer on October 13, 2020
I'm not much for listening to CNN when they review a book, but this is by far one of the best reads I have had. Call it the definition of a conversationalist piece--it will not disappoint with not only the facts but the witty sarcasm and humor that many of these extinct countries deserve.
Images in this review

R. Patrick Baugh
4.0 out of 5 stars Interesting to map lovers/historians
Reviewed in the United States on June 23, 2021
Verified Purchase
Fun read, but only if you are a historian or map lover. Each article is about 3-4 pages, with a little history thrown in.
Read more
One person found this helpful
Helpful
Report abuse

Elizabeth Ann
5.0 out of 5 stars For the hard to gift person
Reviewed in the United States on December 26, 2020
Verified Purchase
Birthday gift to a friend’s husband and he immediately started reading & was fascinated by the book.
Read more
2 people found this helpful
Helpful
Report abuse

Rokame
5.0 out of 5 stars Hysterical AND Historical
Reviewed in the United States on July 30, 2021
Verified Purchase
I really enjoy Gideon's humor. This is the type of book that I will pick up and read again. .
Read more
Helpful
Report abuse

Boredinnc
5.0 out of 5 stars Cool find
Reviewed in the United States on November 12, 2020
Verified Purchase
This is a fun read!!
Read more
One person found this helpful
Helpful
Report abuse

randy siegel
4.0 out of 5 stars Didn’t realize that it came from england
Reviewed in the United States on October 31, 2020
Verified Purchase
Gifts
Read more
Helpful
Report abuse
See all reviews

EllieWC
5.0 out of 5 stars Don't follow his dreams of a kingdom!
Reviewed in the United Kingdom on October 26, 2020
Verified Purchase
Great fun to read and to learn the characteristics of most monarchs of these countries:
Mad;
• Good at borrowing money and not paying it back;
• Charismatic;
• Bum at choosing locations for their country;
• Useless at managing a country;
• Unable to either defend against the various colonial empires or to sell their own country to these empires;
• Great at designing flags and uniforms.
So basically stupid, and worryingly, able to persuade people to get involved in their schemes, many of whom lost their lives due to famine, disease or other avoidable disasters.

Learnt something very interesting about the Vanuatu island and their hairless pigs, who are pseudo hermaphrodites – whereby the males have internal testes.
There is an article in 2006, by Lum et al in the PNAS journal, that days – pig is food in itself but is also a food storage unit, thus we obtain societal wealth and ecological balance by a form of competitive giving – of the pig.
Some pigs become ritual animals and are considered to have the equivalent status to a ‘man of title’ as they are very difficult to rear and being hairless suffer from sunburn. They are therefore extremely valuable in the pig hierarchy.

craftylady
5.0 out of 5 stars Fantastic book to dip into forever
Reviewed in the United Kingdom on September 7, 2020
Verified Purchase
A wonderfully funny book that before I had finished I had placed an order for as soon as it is available. This is what I call a coffee table book - one that is easy to dip into whenever there is a short while to be amused. It is full of a lot of sarcasm and witty comments which add to the joy of reading this book. The text is short and snappy about each country and the maps tie them up very clearly. This is a great book to pique interest in these obscure countries and lead to research by the readerinto more facts and to discover the full truth. My thanks go to NetGalley and 4th Estate for letting me have an advance copy to give an unbiased review. I highly recommend this to anyone with a slight interest in history or just like reading an amusing book. . And thanks to NetGalley and the publisher for my ARC in exchange of an honest review.
Read more
2 people found this helpful
Report abuse

Nicky Bacon
5.0 out of 5 stars Could not put it down
Reviewed in the United Kingdom on May 26, 2021
Verified Purchase
One of the worst books I ever read was Charles Dickens' "A child's history of England". The author forsook all ideas of historical objectivity in favour of spitting out his personal prejudices. This author does exactly the same thing but does so in such an entertaining manner that the book is a fantastic read.
Read more
Report abuse

Sharon Threlfall
4.0 out of 5 stars A good introduction of a little short on details
Reviewed in the United Kingdom on December 11, 2020
Verified Purchase
Interesting history of territories and small countries; would have liked some more detail but useful to start further research on places that pique your interest
Read more
2 people found this helpful
Report abuse