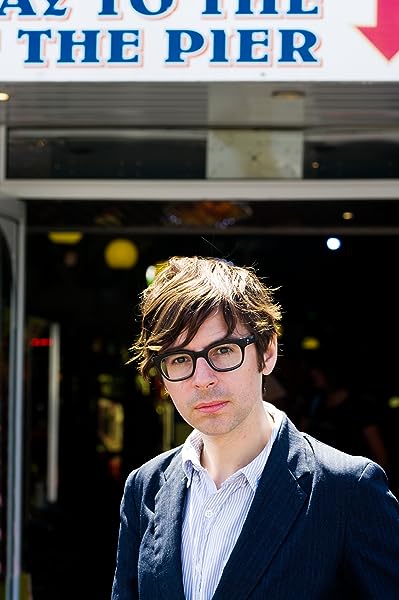 Atlas of Improbable Places: A Journey to the World's Most Unusual Corners (Unexpected Atlases) Hardcover – October 15, 2016

“ ‘A compendium of unlikely, curious and plain odd locales’ seems something of a natural habitat for Travis Elborough, a cultural historian with a touch of the Betjemans and a lick of the Meades about him. From deserted mining towns in Nagasaki to the ever-decreasing Holland Island in Maryland, he and cartographer Horsfield do us a great service: making the world feel bigger.”
- Monocle magazine

“informative and enthusiastic, scholarly and amusing….once started it’s nigh on impossible to put down.”

“The photos are a treasure trove. The paper is divine. Travis Elborough’s writing is sublime, and the cartographic skills of Alan Horsfield make this a gift you will not want to part with. So buy yourself something nice this Christmas.

“Guaranteed to whet the appetite of all budding urban explorers and teenagers wondering where to go on their gap year.”

“this engrossing book traverses the heights and depths, the beauty and terror, of our world.”
- The Observer

“non-formulaic, deeply researched – and really worth your time.  Co-author and cartographer Alan Horsfield brings a scientific rigour to its scope and design.”
- The Book Club, GQ magazine

“an elegant, atmospheric remedy for creeping world-weariness.”
- The Lady

“With its identical towns, global corporations and digital landscapes, the modern world can seem quite uninspiring. But, for the British author Travis Elborough, interesting places do exist, you just need a way to find them.”
- Jocks & Nerds

“This is a deliciously gloomy, sometimes spooky and often kooky collection of essays…”
- The Age, Australia

“The author makes a witty and well-informed guide to some of the world’s most curious and bizarre locations.”
- World of Cruising magazine

Travis Elborough has been a freelance writer, author and cultural commentator for more than a decade now. His book include The Bus We Loved, a history of the Routemaster bus;The Long Player Goodbye, a hymn to vinyl records; and Wish You Were Here, a survey of the British beside the seaside. Elborough is a regular contributor to the Observer and the Guardian but has written for the Times, Sunday Times, New Statesman, the Oldie, TATE etc., BBC History magazine and Kinfolk among others and frequently appears on BBC Radio 4 and Five Live.

ALAN HORSFIELD has over thirty years' experience as a cartographer. Having started his career at the Ordnance Survey of Great Britain, he has created artwork for many publications, most recently as chief cartographer for Reader's Digest World Atlas. Alan lives in Hampshire with his wife and three children.

4.3 out of 5 stars
4.3 out of 5
92 global ratings
How are ratings calculated?
To calculate the overall star rating and percentage breakdown by star, we don’t use a simple average. Instead, our system considers things like how recent a review is and if the reviewer bought the item on Amazon. It also analyzes reviews to verify trustworthiness.
Top reviews

IndigoD
5.0 out of 5 stars Great book for the curious ages 9-100
Reviewed in the United States on February 10, 2017
Verified Purchase
VERY cool book. Kids as well as adults will be intrigued by it. My 12 year old daughter has read it twice and taken it to school to show friends. My husband read it and decided we needed to go on a trip to see some of these places. My 9 year old son and I read it together and he has decided to find and submit some places that they missed for the next revision.
Read more
8 people found this helpful
Helpful
Comment Report abuse

KimoKailua
4.0 out of 5 stars Really interesting content - distracting font
Reviewed in the United States on December 13, 2019
Verified Purchase
I've been happy with the unusual content. Very interesting. Which is what you want with this kind of book.
My only complaint: size of font makes it hard to read in mediocre light.

Dr. Tom
5.0 out of 5 stars Great book (hardcover version)
Reviewed in the United States on February 12, 2019
Verified Purchase
I bought this as a gift for my brother. I was pretty impressed by it: good quality binding and paper. Plus the content is very fun. I am tempted to get a copy for myself.
Read more
One person found this helpful
Helpful
Comment Report abuse

M. Varley
3.0 out of 5 stars Meh
Reviewed in the United States on January 10, 2017
Verified Purchase
I'm a map freak. There are some interesting things in this book, but overall a bit disappointing. Yes, the places are improbable, but the writing is a bit pedestrian and the book has no (metaphorical) spine beyond random, improbable places.
Read more
8 people found this helpful
Helpful
Comment Report abuse

Jessica
5.0 out of 5 stars Atlas of Improbable Places
Reviewed in the United States on August 25, 2017
Verified Purchase
I bought this for a birthday gift for a friend, and I feel certain he will be delighted with it.
Read more
Helpful
Comment Report abuse
See all reviews

JohnH52
2.0 out of 5 stars Better books available
Reviewed in the United Kingdom on October 18, 2018
Verified Purchase
The maps were lacking detail. In fact I found the book quite superficial. It is obvious the writer has not visited many if any of the places in the book but probably compiled it from the internet. The writing style was ok but more on the emotive than factual. Many photos were black and white with poor contrast.
Read more
One person found this helpful
Report abuse

KDO
4.0 out of 5 stars Great book...
Reviewed in the United Kingdom on March 5, 2019
Verified Purchase
It was an excellent read!
Read more
Report abuse

Amazon Customer
5.0 out of 5 stars Five Stars
Reviewed in the United Kingdom on June 1, 2018
Verified Purchase
This book is great and it arrived really quickly and is excellent value for money
Read more
Report abuse

Page 1 of 1 Start overPage 1 of 1
This shopping feature will continue to load items when the Enter key is pressed. In order to navigate out of this carousel please use your heading shortcut key to navigate to the next or previous heading.
Back
Next
Pages with related products. See and discover other items: world geography, World City Maps