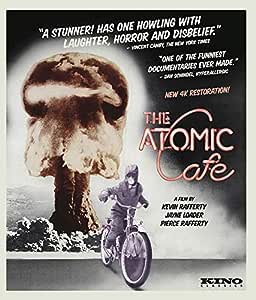 Armageddon has never been so darkly funny as in The Atomic Café. This 1982 cult classic juxtaposes Cold War history, propaganda, music and culture, seamlessly crafted from government-produced educational and training films, newsreels and advertisements. Taken together, these sources cheerily instruct the public on how to live in the Atomic Age, how to survive a nuclear attack (!) ... and how to fight and win a nuclear war. As a U.S. Army training film advises, "Viewed from a safe distance, the atomic bomb is one of the most beautiful sights ever seen by man." Returning to home video in a sparkling 4K digital restoration created by IndieCollect, The Atomic Cafe is an absurdist blast from the past that would be downright laughable if it weren't so eerily relevant to our fake news present.

4.7 out of 5 stars
4.7 out of 5
153 customer ratings
How does Amazon calculate star ratings?
Amazon calculates a product’s star ratings based on a machine learned model instead of a raw data average. The model takes into account factors including the age of a rating, whether the ratings are from verified purchasers, and factors that establish reviewer trustworthiness.
Top Reviews

Randall Riley
4.0 out of 5 stars Great film, decent but disappointing restoration.
Reviewed in the United States on January 1, 2019
Verified Purchase
I've watched my standard definition DVD of "Atomic Cafe" a million times. That copy looked as if it was taken from a VHS master, meaning there was a significant amount of muddiness to the print. When you combine that with the fact that much of the archival footage that was used in the original edit was already in dubious quality, it made for some rough viewing at times. Still, the absolute genius of this film showed through.

About the restoration- the main advantage to the restoration here is that texts and audio are much sharper and have benefitted from digital techniques that never existed at the time the film was made. I will admit to hoping that the archival newsreel and military footage would have been meticulously restored, color balanced and improved, much like "Trinity and Beyond- The Atomic Bomb Movie" was, but most do not appear to have been touched. Therefore, the result is that you now see "Atomic Cafe" in as good condition as it was originally shown when it premiered in the 1980's. In that respect, it's successful.

Overall, I would strongly recommend buying the Blu-Ray for fans of the film as it's a brilliant work, showing our atomic bravado and atomic ignorance of days gone by.

D. J. Long
4.0 out of 5 stars Good historical documentary of the early Atomic Age 1945-1960
Reviewed in the United States on September 29, 2017
Verified Purchase
Good historical documentary of the first 15 years of the Atomic Age, 1945-1960, with archival historical films from various sources, both military and civilian, with television broadcasts and the famous "Duck and Cover" school films of the mid-1950s. Shockingly shows the original 16mm color film footage of the Atomic Bomb blast test in Nevada in 1954 in which dozens of U.S. Army soldiers were exposed to nuclear radiation to study its effects on them. Also noteworthy for contemporary pop music tunes with atomic age themes on the soundtrack. Originally when this movie was released in 1982, there was a soundtrack album on LP and CD available on Rounder Records, now out of print, with all the songs on it.
Read more
4 people found this helpful
Helpful
Comment Report abuse

Kilgore Trout
5.0 out of 5 stars One of the Narratives of the US Apocalypse
Reviewed in the United States on November 11, 2018
Verified Purchase
This was too sobering to laugh about. It shows how our arrogant government used and abused its own military and civilian populations while callously annihilating the lives of others in Japan and those in other places. Pushing the agenda of spending and seeing ourselves as the 'chosen ones' of the planet, we come across as narcissistic and fatally ignorant in this film, something we have lived up to ever since. President Eisenhower was one of the few voices on this who seemed to have a conscience.
Read more
3 people found this helpful
Helpful
Comment Report abuse

Alexander O. Teitz
4.0 out of 5 stars Duck and Cover
Reviewed in the United States on December 7, 2018
Verified Purchase
I remember seeing this film in middle school social studies with a liberal anti-nuke teacher. Watching it again is a thrill. Last year I read the book Black Rock dealing with the secret installations the government made to survive a nuclear war. The big secret being that all the talk of civil defense was a scam. They didn't care how many civilians were lost. Seeing the civil defense propaganda mixed with footage of the real tests is both funny and scary. This film is a thrill for history buffs and those who remember when the war was "cold."
Read more
2 people found this helpful
Helpful
Comment Report abuse

Inge
5.0 out of 5 stars Love this documentary-style DVD!
Reviewed in the United States on March 5, 2018
Verified Purchase
I love this movie, and have shown parts of it to my college history classes for years. It’s so different - evocative and seamlessly edited, you don’t even realize that the narration is entirely from the films themselves, not that of an external narrator.

This edition came to me in perfect condition, as ordered, and on time. :-)

dwight
4.0 out of 5 stars Learning a Lesson While Laughing
Reviewed in the United States on August 2, 2016
Verified Purchase
I recall the duck and cover we had to do as a drill, especially living near a SAC AFB, not that it woulda done us any good, but it would've given us something to do while turning into ash shadows in milliseconds. Knowing what we know now, this movie is eerily hilarious...and sad, considering what the soldier went through after charging toward the giant Fire Mushroom. I think it's good for this new generation (and the Trump-ies) to understand how close we came to NOT having a new generation and how we need to know more fully about the TOYS we play with before we actually play with them.
Read more
8 people found this helpful
Helpful
Comment Report abuse

bobula13
5.0 out of 5 stars Must See
Reviewed in the United States on March 21, 2019
Verified Purchase
I had heard about this documentary since I was a kid and never got the chance to see it. Now that I am a grown up and can make my own decisions, I ordered this right away. It is a fantastic mixture of footage from the government and awareness films during WWII and the fifties. This film is an amazing feat in what you can accomplish with good editing. Don't pass this up
Read more
One person found this helpful
Helpful
Comment Report abuse

Amazon Customer
5.0 out of 5 stars Still Vitally Important
Reviewed in the United States on May 1, 2018
Verified Purchase
The use of original archival footage is brilliant. The final sequence is a masterpiece, cutting between the story the public was being told vs the reality of what these weapons are capable of. People think we're not still on the knife edge of nuclear obliteration any more, but that's just not true.
Read more
3 people found this helpful
Helpful
Comment Report abuse
See all reviews from the United States

Boydon Boydon
5.0 out of 5 stars Hilarious and Horrifying
Reviewed in the United Kingdom on April 7, 2019
Verified Purchase
This (Region A) Kino blu-ray gives a picture quality that is vastly improved on any of the previous editions on VHS and DVD. However, The Atomic Café is compiled from a huge variety of archive material, and as the restoration is of the finished documentary (rather than individual source films) the quality of image varies as much as the finished film did. Black-and-white generally fares better than the colour images, as most of the original colour film seems to be 16mm using a variety of colour processes, and some of the black-and-white images are from telecine and videotape which doesn’t compare well to original film. Still, I would guess that this restoration very closely aproximates the prints which were seen in those cinemas lucky enough to get a copy during the film’s initial release in 1982.

But, please, don’t let any of this deter you: the film itself is a masterpiece of editing. Using only archive film and soundtrack, with the addition of some popular music and sound broadcasts of the period, it is a hilarious and horrifying picture of the outcome of a government policy which can now be seen to be completely mad, and a lesson from history that we have still to learn. A must-see film for everyone.

Finally, as if the improvement in image quality were not enough, Kino have generously included over 3 hours (yes, over 3 hours) of original government propaganda films, which feature in the documentary, together with some fascinating audio interviews.

the definitive reviewer
2.0 out of 5 stars My 20 year old VHS tape is better quality
Reviewed in the United Kingdom on May 3, 2014
Verified Purchase
Stupid, silly silly me- thought all DVD's were uniformly of a higher standard than old fashioned VHS. Wrong, wrong, wrong!
Read more
One person found this helpful
Helpful
Sending feedback...
Thank you for your feedback.
Sorry, we failed to record your vote. Please try again
Report abuse

Kevin Ford
5.0 out of 5 stars Laughable and scary at times.
Reviewed in Canada on August 16, 2019
Verified Purchase
I saw this years ago and never forgot it! True U.S. propaganda&Ignorance during that time.
Read more
One person found this helpful
Helpful
Sending feedback...
Thank you for your feedback.
Sorry, we failed to record your vote. Please try again
Report abuse