You've subscribed to Wingman! We will preorder your items within 24 hours of when they become available. When new books are released, we'll charge your default payment method for the lowest price available during the pre-order period.
Update your device or payment method, cancel individual pre-orders or your subscription at
Your Memberships & Subscriptions
There was an error. We were unable to process your subscription due to an error. Please refresh and try again. 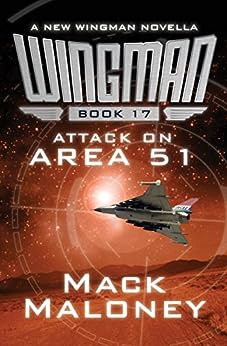 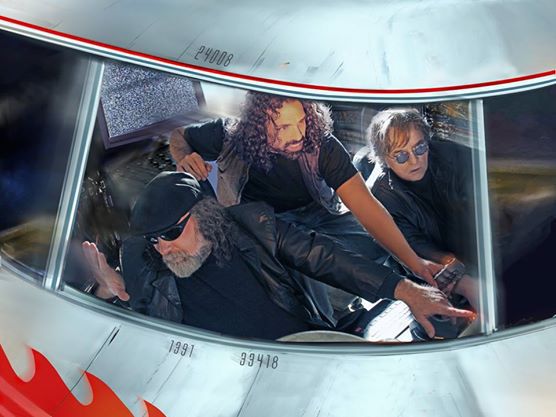 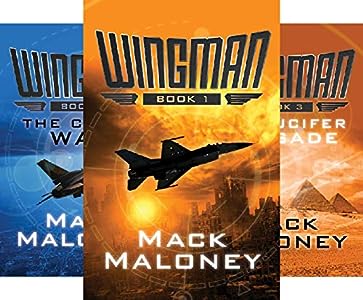 Mack Maloney is the author of numerous fiction series, including Wingman, Chopper Ops, Starhawk, and Pirate Hunters, as well as UFOs in Wartime: What They Didn’t Want You to Know. A native Bostonian, Maloney received a bachelor of science degree in journalism at Suffolk University and a master of arts degree in film at Emerson College. He is the host of a national radio show, Mack Maloney’s Military X-Files. Visit him on Facebook and at www.mackmaloney.com.

4.3 out of 5 stars
4.3 out of 5
86 global ratings
How are ratings calculated?
To calculate the overall star rating and percentage breakdown by star, we don’t use a simple average. Instead, our system considers things like how recent a review is and if the reviewer bought the item on Amazon. It also analyzes reviews to verify trustworthiness.
Top reviews

Daniel
VINE VOICE
3.0 out of 5 stars A novella that moves along swiftly that will satisfy a craving for adventure.
Reviewed in the United States on December 19, 2016
Verified Purchase
As you can see by the cover, this is the 17th book in a series, though it is the first one that I have read.

It is a bit uncommon these days to find a book or a series that is akin to serial pulp fiction. Think back on the days (if you are old enough [as I am]) to Doc Savage, The Executioner, Perry Rhodan, or even the more juvenile-targeted Mike Mars, or Tom Swift. This appears to be a book series that harkens back to these classic pulp adventure days.

Hawk Hunter was a World War III hero who vanished on an extra-terrestrial mission a decade earlier. He now returns to his very damaged America with an equally damaged memory. The noted Area 51 holds the key and Hawk must fight his way there and along the way he'll remember more and more about alternate universes and his actions among many of them. Fortunately, Hawk has an uncanny ability to maneuver in any ship that can fly, and he'll need that ability to survive.

This is just pure, adventure fun. This is the sort of book you read to take a break from the insightful, meaningful literature you might normally read. It is not intended to make a lasting impression, but rather be a bridge from one book to another. It is the snack food - the Kit-Kat Bar - of books. And in this role it does a fine job.

I was suitably entertained. It made me miss the old Doc Savage books I read as a teen and I thought it did a nice job of staying current in the sci-fi/adventure worlds.

I would be very willing to venture into this Wingman world again when I have an afternoon where I am looking for something to read.

Looking for a good book? <em>Attack on Area 51</em> by Mack Maloney is a <em>Wingman</em> novella that moves along very swiftly, won't hold any lasting impressions on the reader, but will satisfy the craving for some quick adventure.

I received a digital copy of this book from the publisher, through Netgalley, in exchange for an honest review.
Read more
Helpful
Report abuse

Jersey KidTop Contributor: Firefly (TV Show)
4.0 out of 5 stars Good to have The Wingman back, even in an abbreviated format
Reviewed in the United States on September 16, 2013
Verified Purchase
Some ten years ago, Hawker Hunter (aka The Wingman) launched into space aboard the Russian Zod space shuttle. His mission: to capture and bring to justice Viktor, the man responsible for most of the sorrows in the post-World War III world. With his enemy almost within his grasp, Hunter was confronted with an unimaginably great threat: a rogue comet about to hit the earth. His efforts to deflect the comet succeeded, but at the cost of his own life.

Now, the former United States of America has reverted to a balkanized morass of city-states, provinces and enclaves, beholden to no one and, by-and-large, intent on the destruction of one another. The story opens with the arrival near Football City - an entity populated by those who want to restore the USA of that self-same ZOD shuttle, piloted by Hawk Hunter himself. Neither the population of Football City - which includes many of his friends and companions - not Hunter (at least initially) knows where he has been or what he was doing during his absence.

Some clarity occurs after Hunter defeats an attack on Football City by a motley collection of jet bombers, but there are still major gaps in his memory. Therapy indicates this may not be classic traumatic amnesia but the result of time slippage between parallel universes. It is also determined scientific study was being carried out on this topic at Area 51 in Nevada.

This is the 17th book in The Wingman series and there has been about ten years since the last one. Fans of the series and of author Maloney know this time was not a total blank but instead saw Hunter - or at least a very similar character named The Starhawk - engage in adventures even more exotic than in the original series. What is similar between the two series is that in both America has been lost. Whether this was a foreshadowing of the linked universes theory is best left to the individual reader. However, Maloney has a tendency to intertwine characters and plot devices across his various series. And, with the introduction of the premise of multiple parallel universes, the author has given himself a solid, if somewhat disingenuous, method of resolving any issues related to either storyline or technological inconsistencies.

And, while it is a joy to return to the world of Hawk Hunter, I felt saddened the book was but 120-odd pages; a novella if you will. It's written in the usual Maloney style melding technology and tits, but there is a rushed feel to it and a sense the plot is moving towards nothing less than the completion of the saga. This is amplified by several strings of characters and events that - though garbed in the mantle of recovered memories - amounts to little more than name-checking. I will say that I was somewhat encouraged by the ending that other books may be in the offing.
Read more
3 people found this helpful
Helpful
Report abuse

gryphonskymaster
5.0 out of 5 stars Angels 13
Reviewed in the United States on July 1, 2013
Verified Purchase
A short, fast, read of a beloved character and story. As with many long term works, it reflects changes in the current world and national stage while keeping to the series. A long time fan of the series as well as the other works of the author this delivered the military/sci-fi/techno action expected in the series. The writing is not as tight as the original series. The higher fluidity makes it very fast reading. It will very likely spark a new generation readers. In previous reviews I have noted that Mack's books tie in very well to each other in the series. This may not be true of this installation. It will trigger memories for long time readers of the series and I imagine some debate as inferences, events, etc trigger some differences in conclusions from previous installments. For the new reader, much will seem to rapid, some what underdeveloped to understand what this series and its' characters are about. The flying scenes, the original draw for this reader years ago are good. One hit, no one in the business calls altitude the number and "angels", it is stated as this review is titled: "angels" and the two digit number. Loser alert (!) stuff like that drives me nuts. Far exceeding this minor thing, the descriptions of the aircraft, modifications, and keeping the technology in line with the period of the book was solid work. The tie ins to things like String Theory, alternate parallel universes etc - are just vintage, fun Mack Maloney with great tie ins to other series of works. If your a Wingman geek like myself this is a welcome return. It is to short and it demands more. If your a new reader to the series, it will either turn you into a fan for others previous installments of this alternate history-science concept or you will read it move on. What it will do is entertain you if you crave the unique blend of military+aviation+science fiction, and the ethos of the warrior.
Read more
3 people found this helpful
Helpful
Report abuse
See all reviews

Steve
2.0 out of 5 stars Not as good
Reviewed in the United Kingdom on November 17, 2014
Verified Purchase
The finale to hawk Hunter? I hope not as it would be a pretty poor way to go out of a huge series. Would make a good series of gold though
Read more
Report abuse

Dave Henly
5.0 out of 5 stars About time!
Reviewed in Canada on July 27, 2017
Verified Purchase
A lot of years between the last book written and this one - I have all the early books, have read them over and over, and this one fits right in.
Read more
Report abuse
See all reviews