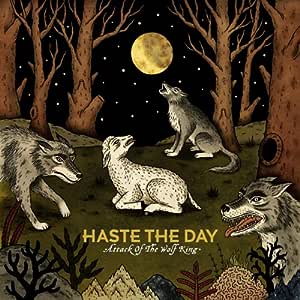 Attack of the Wolf King

2010 release, the fifth album from the Christian Metalcore band. Since their debut in 2004, Haste the Day has been a genre defining band, with thousands of shows worldwide and a slew of press and record success. Attack Of The Wolf King is poised to again push the boundaries of the genre.

4.7 out of 5 stars
4.7 out of 5
26 customer ratings
How does Amazon calculate star ratings?
Amazon calculates a product’s star ratings based on a machine learned model instead of a raw data average. The model takes into account factors including the age of a rating, whether the ratings are from verified purchasers, and factors that establish reviewer trustworthiness.
Top Reviews

Craig H
5.0 out of 5 stars FLAWLESS!
Reviewed in the United States on August 22, 2010
Verified Purchase
I can't say I'm the biggest Haste the Day fan, but I've been listening to them since WEF. All of us know that many things have happened since then, changes in the lineup, the music, etc.

In my opinion, WEF was a great cd, and everyone reading this will probably agree with me. There were great songs on that cd, and also the CD as a whole was amazing too. This was not the case with PTH and Dreamer. In both cds there were good songs, but none of them were completely good as an album. There were always songs you would skip to get to the "best" part, or just to the next part that is somewhat good or enjoyable.

Attack of the Wolf King completely changed this, and let me start off saying that as I said on the topic: it's FLAWLESS. I've been listening to it for a couple days now, and I don't think I have a favorite song yet (that's just me). What's really awesome about this cd is that, whenever I feel like listening to it, or just any part of it, I have to listen to the cd from the first song, and listen to the whole thing. I feel like it's like a story, or a whole new adventure, that you can't just take one small part of it, but the whole thing, cause if you don't, it's just not the same. Every song has its own touch, its own ingredient to add to the CD, and I can't stop listening to it.

It took me a couple listens to get used to the new sound, cause it's definitely a new sound, but the guitars for example, are way more technical (the other reviewers also mention this), there is a slower/different feel to a couple of the songs (Dogs Like Vultures, Travesty), and the new breakdowns, all of it is just... Amazing. I can't find any other word to describe it.

For the old fans, expect something different, but expect some GOOD stuff. These guys have proven that once again, they are able to create beautiful music. I'm telling you. Ask the rest of the world.

Ron Gibson
4.0 out of 5 stars Pleasantly Surprised- They Still Deliver
Reviewed in the United States on March 16, 2011
Verified Purchase
I was worried when I heard Devin and Brennan left the band. Giuseppe however did a stellar job. His timing and tight chops maintain the high standard Devin spoiled us fans with. Although differences in "Attack of the Wolf King" can be heard from previous HTD releases, they still maintain the core sound and offer a fresh HTD album. Stephen was a great addition after Jimmy left, and with each release, Stephen has only gotten better. HTD reminded me of As I Lay Dying in that each band had a fantastic album that would be difficult to follow. "Dreamer" is a great album and had a unique production quality that I love. I wasn't sure if "Attack" would live up to the heights of "Dreamer", but it might be a tie. Either way, just to get close means it's got to be a great listen! Sadly, "Attack" will be the last of any new HTD albums. To be able to end a career as strong as they have with "Attack of the Wolf King", is something to be proud of.
Read more
One person found this helpful
Helpful
Comment Report abuse

D. Friedman
5.0 out of 5 stars HOLY CRAP!!!
Reviewed in the United States on June 29, 2010
Verified Purchase
Are these guys serious?! I just bought "Dreamer" not that long ago... (great album by the way) I own all of their albums and they seem to not only get better with each release, but also better each time I listen to each album.... but this album is just ridiculous!! Completely unexpected... very heavy, well thought out, great production, etc... I could go on and on but you would be better off enjoying this album instead of reading my ramblings! BUY IT NOW!!
Read more
4 people found this helpful
Helpful
Comment Report abuse

Chris Schwabe
5.0 out of 5 stars Unbelievable!
Reviewed in the United States on August 24, 2010
Verified Purchase
I had previously listened to American Love and Stitches by Haste the Day, and I enjoyed both songs but I felt like something was missing from those songs which kept me from purchasing their earlier albums.

However, after sampling some of the songs I ultimately purchased Attack of The Wolf King and immediately fell in love with it. The screams and clean vocals of the lead singer are very impressive. The drums and guitar work also go really well in many of the songs.

I recently saw these guys live and they brought it hard. One of my new favorite bands just because of this album.

I would recommend listening to: Dogs Like Vultures, Travesty, and The Place That Most Deny.
Read more
4 people found this helpful
Helpful
Comment Report abuse

Tim
5.0 out of 5 stars Best Haste The Day album.
Reviewed in the United States on December 31, 2013
Verified Purchase
This is the best Haste the day album this far. I love there other music but this one really hits the spot.
Read more
Helpful
Comment Report abuse

F6FFreak
5.0 out of 5 stars Brilliant.
Reviewed in the United States on April 21, 2013
Verified Purchase
Haste The Day really got their stuff together on this album. Brilliantly mastered. Much harder style, but mixed with a more overall mellowness than Dreamer. If you like anything by HTD, do yourself a favor, buy it.
Read more
Helpful
Comment Report abuse

ledrayton02
5.0 out of 5 stars Amazing!
Reviewed in the United Kingdom on May 19, 2013
Verified Purchase
I like this album a lot and I would definitely recommend it to any buyer. I find it a very worthy purchase!
Read more
Helpful
Sending feedback...
Thank you for your feedback.
Sorry, we failed to record your vote. Please try again
Report abuse