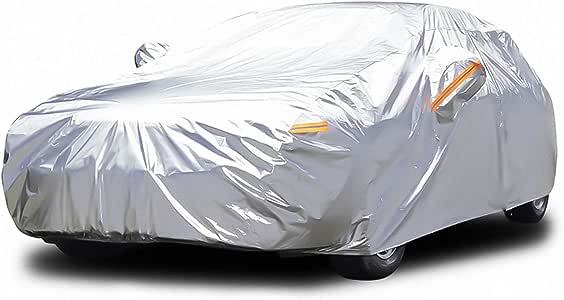 Visit the Audew Store
4.4 out of 5 stars 1,596 ratings
| 333 answered questions
Available at a lower price from other sellers that may not offer free Prime shipping.

With a 6-in-1 material structure, the Audew car cover can adapt to different weather conditions. It can well protect your car from solar radiation and has good waterproof performance. It is therefore easy to keep the car clean in all weather.

What are the details of the materials?

Audew car cover is composed of PE, aluminum, EVA, breathable film and soft film layer. It feels soft and light because we use a high-pressure synthesis process to make it thinner and more stable.

4.4 out of 5 stars
4.4 out of 5
1,596 global ratings
How are ratings calculated?
To calculate the overall star rating and percentage breakdown by star, we don’t use a simple average. Instead, our system considers things like how recent a review is and if the reviewer bought the item on Amazon. It also analyzes reviews to verify trustworthiness.

Karen Nelson
5.0 out of 5 stars Great car cover
Reviewed in the United States on January 20, 2019
Size: Fit Sedan (175''-190'')Verified Purchase
What a great car cover! It fits both my husbands sedan and my VW convertible. I’m happy with how it protects from sunlight and all the elements. Highly recommend.
Read more
73 people found this helpful
Helpful
Comment Report abuse

Vanessa Vex
5.0 out of 5 stars Cool n Neat Car Cover!
Reviewed in the United States on May 18, 2019
Size: Fit SUV/Jeep (190''-201'')Verified Purchase
I like how they have orange stripes on the car cover to easily see where to line up the side mirrors ! Plus there’s buckled on the bottom to tighten the cover if it gets too loose. It didn’t rain yet but when it does, I’ll let y’all know how well it held up ! 😀
Read more

seckcoder
1.0 out of 5 stars Terrible quality
Reviewed in the United States on June 23, 2019
Size: Fit Sedan (175''-190'')Verified Purchase
This is what I saw after I put the car cover on for around three days. Terrible quality. I hope I can give this a -1 star.
Read more

Vikash Chand
5.0 out of 5 stars Protective layers
Reviewed in the United States on November 10, 2018
Size: Fit Sedan (175''-190'')Verified Purchase
The material is so good
It is very easy to use
It covers the car properly till the down
It has a secure belt which help to protect the cover from flying away with wind and strom

Brianne Ashley
1.0 out of 5 stars DO NOT BUY THIS COVER!!! Will ruin your clear coat!!!
Reviewed in the United States on August 11, 2019
Size: Fit Sedan (175''-190'')Verified Purchase
I put this cover on my car and as you can see from the attached photos after only being on the car for 1 week it caused the clear coat on my hood to get moisture under it. The hood was not like this prior to using this car cover and I bought the cover to prevent something exactly like this from happening. I would give the item 0 stars but can't. Save yourself the trouble I am now in and buy a different cover. Definitely, do not recommend.
Read more

QW
5.0 out of 5 stars has cotton lining
Reviewed in the United States on December 5, 2018
Size: Fit Sedan (175''-190'')Verified Purchase
This car cover is exactly what I want. This cover has cotton lining inside to protect the car being scratched.
Besides, it comes earlier than I except.
Nice.
Read more

MS
4.0 out of 5 stars So far working good
Reviewed in the United States on November 1, 2018
Size: Fit SUV/Jeep (190''-201'')Verified PurchaseEarly Reviewer Rewards(What's this?)
I had another Audew car cover which was thinner. It lasted only one season since it started tearing off, but it worked good while it lasted.
This one is more expensive than the last one, hopefully might last longer. I have noticed one thing about this car cover that the inner layer attracts dust easily especially the lower part and when you take it off and put the cover back on car it kind of dirties the car too. so now me and my husband kind of hold it and dust it once and put it on car. Over all a good car cover and I hope it last more than one season.i got the suv size mentioned for my Audi Q5 but its a bit large in the back and it hangs down some cover on the floor. ITs okay as long as there is no rain but if u manage to get the right size it fits well.
Read more
36 people found this helpful
Helpful
Comment Report abuse

Jose Arellano
4.0 out of 5 stars For what it is, it's good: Updated
Reviewed in the United States on August 2, 2019
Size: Fit SUV/Jeep (190''-201'')Verified Purchase
Update: 8 months and quick update. I now have a small tear near the right bottom of the cover. Since it's near the tire portion it's not that big of an issue. It holds up well with high winds doesn't fly away. Heavy rains will dirty the car a bit especially if the car had dust before putting the cover on but it's not that bad for being so thin. It does a really good job for protection and I still recommend.

First, it's very thin. I don't understand where other reviews state it's thick, maybe it's the first car cover they've ever used, but it's thin, very thin, compared to some other covers I have had in the past. I bought this to fit over a 2014 impala, which is a very long car. It fits, and it does cover the whole car. My first issue is with the fit though, it hangs on the ground on the sides, maybe about half an inch touching the ground on both sides of the car. This is great to get full coverage, but it also allows ants and other bugs to crawl up the cover. I have found many ants that over the night crawled up the cover since it's touching the ground, and have to sweep them off before removing the cover to access the car. I do like the straps, not difficult to use and since it's both front and rear, they keep the cover on the car in the high wind area I find myself in. Have not had it fly away since buying it. It has rained lightly a few times and it worked well, the car wasn't wet. I'm certain though with hard heavy rain, the cover won't repel much, you'd need a very expensive cover for something like that. It does have a cotton lining that helps not scratch the paint. Not easy to put back into the bag it comes with, so I use a large trash bag for the cover when not in use. I feel it's overpriced, but, I do think it's a decent cover. Being so thin, I can't say how long it would last, I've had mine about a month, and found no issues with tears or whatnot, but how long that will last, who knows. I would recommend to others who are looking for a cheap cover that will protect the paint from sun/elements, but it's not the best, and it does have some issues.
Read more
19 people found this helpful
Helpful
Comment Report abuse
See all reviews

Deano
5.0 out of 5 stars Car cover
Reviewed in Australia on April 6, 2020
Size: Fit SUV/Jeep (190''-201'')Verified Purchase
Till I get a carport or garage built this is a great product to protect my car from the elements.
Read more
Report abuse
See all reviews
Pages with related products. See and discover other items: Best auto covers for cars, coverking car covers, Car Paint Protection Films, Best car covers for automobiles, Explore hail protections for vehicle, Explore water proof materials for auto