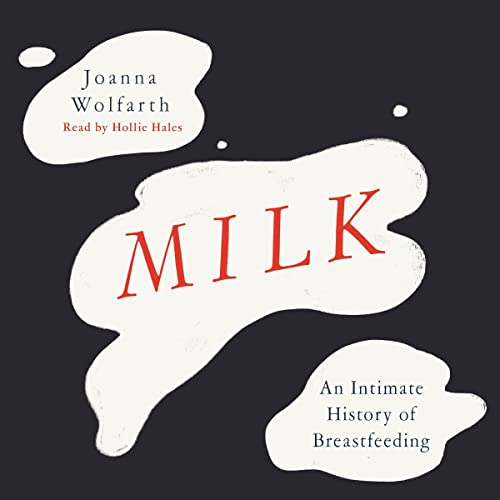 Milk: An Intimate History of Breastfeeding

When Joanna Wolfarth was pregnant with her first child, she assumed she would breastfeed, as her mother had fed her. Yet she was unprepared for the startling realities of new motherhood. Then, just four weeks after the birth, she found herself back in hospital with an underweight baby, bewildered by inconsistent advice and overcome with feelings of guilt and isolation.

Months later, her cultural historian's impulse led her to look to the past for guidance. What she discovered, neglected in the archives, amazed and reassured her. By piecing together cultural debris - from fragments of ancient baby bottles to eighteenth-century breast pumps, from the Palaeolithic Woman of Willendorf figurine to the poignantly inventive work of Louise Bourgeois and from mythical accounts of the creation of the Milky Way to advice found in Victorian medical manuals - Joanna began to understand how feeding our babies can be culturally, economically and physiologically determined as well as deeply personal and emotive.

Using the arc of her own experience, Joanna takes us on an intimate journey of discovery beyond mother and baby, asking how the world views caregivers, their bodies, their labour and their communal bonds. By bringing together art, social histories, philosophy, folk wisdom and contemporary interviews with women from across the world, Milk reveals how infant feeding has been represented and repressed, celebrated and censured. In doing so, Joanna charts previously unexplored territory and offers comfort and solace to anyone who has fed or will feed a child.

PLEASE NOTE: When you purchase this title, the accompanying PDF will be available in your Audible Library along with the audio.

Helen H
5.0 out of 5 stars Fascinating
Reviewed in the United Kingdom 🇬🇧 on January 22, 2023
Verified Purchase
To be clear, I'm not in the demographic that this book is aimed at (being late 60s and child free), but I found it fascinating, informative and moving. It challenged me to think about my own views of breast feeding ... and made me realise I shared some of the prejudices and misconceptions that the author so cleverly highlights.
Read more
One person found this helpful
Report abuse

Pawsome
5.0 out of 5 stars An illuminating and heartfelt read on an overlooked subject
Reviewed in the United Kingdom 🇬🇧 on January 26, 2023
Verified Purchase
An honest and emotional account of infant feeding and the connections that has to motherhood. The author brings together fascinating cultural materials alongside interesting historical perspectives, as well as her own complicated experiences of parenthood. This feels like the start of very important conversations.
Read more
Report abuse

Phil
5.0 out of 5 stars A beautifully written history of breastfeeding
Reviewed in the United Kingdom 🇬🇧 on January 22, 2023
Verified Purchase
I thoroughly enjoyed reading this fascinating book. It’s beautifully written and is a must read for all! Highly recommend.
Read more
Report abuse
See all reviews