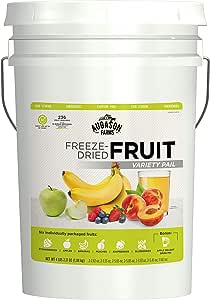 4.4 out of 5 stars
4.4 out of 5
44 global ratings
How are ratings calculated?
To calculate the overall star rating and percentage breakdown by star, we don’t use a simple average. Instead, our system considers things like how recent a review is and if the reviewer bought the item on Amazon. It also analyzes reviews to verify trustworthiness.

Elizabeth
5.0 out of 5 stars Damaged buckets, evil red lids, and Ethan!!!
Reviewed in the United States on June 23, 2019
Verified Purchase
I ordered this variety of freeze dried fruit in the plastic bucket under the assumption that the hard plastic would protect them from crushing. A crushed plastic container arrived within a perfectly new-looking cardboard box. Damage was hidden until I open the cardboard box. I did not immediately open the plastic container thinking I would return it after venting to the seller. I assumed product would be mostly powder anyway. Was not happy and gave them a one star.

They responded the next business day at an inappropriate time for me to talk, but the rep agreed to call back at a specific time. AND HE DID! A half-hour later than stated, but WOW! How many companies nowadays actually call the customer back, not only once, but TWICE to help them? Thank you!!!!!!!

Oh and about that crushed plastic tub. It was packaged in the warehouse undamaged according to Ethan (sorry if I remembered your name wrong, hon). What happened to the plastic? Altitude change compression. The air seal was so darn good the container lost in the battle over physics. The super low air pressure inside the container remained constant, but the the outside pressure increased when it traveled from the majestic high Rockies to our lovely but much lower Appalachians. This will usually result in the container caving in. Further note (my add after research, not the reps words) a container may compress enough to pop the seal under the red lid. The container may at that point pop back out as the internal air pressure equalizes with the outside. What we, the customers will see is a container that looks like the lid was not put on completely (ie: raised somewhere).

And what about the products? Well, I had intended this order to be sampled immediately as crunchy snacks now and not stored. So I, a very strong pioneer woman, fought the monster sealed red lid and after ten minutes opened the offensive round container. Ten minutes was not an exaggeration, and sweet Ethan patiently chatted with me while I destroyed the lid. He was not going to hang up on me until he was sure I was satisfied. Bless the poor man's heart, I think I used some unladylike language, but I got my prizes. Every last one of the vacuum-sealed Mylar bags were intact and the vacuum sealing process had protected them from damage (powderizing) inside the bucket. A few days have passed since my war with the red lid and so I have opened several more bags. NONE of them had anything more than one single tablespoon of powder for the whole huge bag. The rest of the bag was full of delicious crunchy fruit snacks. Yummy! Amazing since freeze-dried fruits powder easily.

Oh. I also ordered the freeze-dried veggies. That container came in with the other lid issue mentioned. One side popped its seal up, but the rubber grommet (necessary to get a good air and water barrier) was not damaged . Sorry, forgot to take a pic of that. But I am not in the least upset. The Mylar bags were sealed perfectly and the product was in awesome condition.

If longer term storage is necessary and you must have that tertiary protection (primary was freeze-drying process, secondary was vacuum-sealed air-impermeable Mylar bags) but the bucket seal has broken, then all you need to do is not kill the red lid and drop in one of those anti-air packets (specifically oxygen absorbers) and stomp the evil red lid back in place. And stomp it really good. That will give you those 20-25 years of decent food storage you expect.

BTW: I recommend you buy that handy lid tool they also sell. Going to war with the red lid using only vise grips was NOT fun.
Read more

james schmidt
4.0 out of 5 stars Great product! The peaches are sweet
Reviewed in the United States on February 9, 2015
Verified Purchase
Great product! The peaches are sweet, the blueberries are sweet, the bananas are also good. The apples are not that sweet, but they are Granny Smith. I use these fruits for camping and hiking, and they are such a good heathy snack. I will prob buy another bucket in the future, just to have. The reason I gave 4 stars is, they put 4 bags of strawberries, and said they ran out of the raspberry :( I was hoping to try them too... Oh and the strawberries aren't the sweetest, so life goes lol
I would have been one happy camper if they would have gave me extra blueberries, and peaches... In stead of of the strawberries
Read more
15 people found this helpful
Helpful
Comment Report abuse

Buster Good
4.0 out of 5 stars Great Product!
Reviewed in the United States on March 30, 2017
Verified Purchase
Pros and Observations:
Has a 'packaged' date and its 25 year 'use by' date printed on the container for reference and contains two pouches of each fruit.
There is a lot of fruit in each pouch, but not so much that two people can't go through it all when using it regularly before it 'gets gross'.
So far, I've only eaten the strawberries, but they were excellent.
Also included in the pail is a little booklet describing each fruit type within it and their reconstitution instructions.
Each pouch also has a 'packaged' and 'use by' date printed on it.

Cons:
The lid is very difficult to remove; I recommend purchasing a lid removal tool if you don't already have one.
Every bag is plain and marked only with a little square sticker identifying its contents, so finding a specific pouch can be a pain.
Read more
9 people found this helpful
Helpful
Comment Report abuse

SeaRick
5.0 out of 5 stars Auguson can be trusted to give you good value at a reasonable price - and the food tastes good too, which is more important.
Reviewed in the United States on July 16, 2016
Verified Purchase
I am a repeat customer of Auguson Farms and can recommend them to anyone who plans on purchasing long-term food storage or who wants to have fruit year-round and you don't have a grocery store nearby. Sturdy, sealed bucket that is vacuum-sealed (suction dents in bucket) and flushed of oxygen. I am a big fan of Auguson because of the quality which is worth the few extra dollars it costs over other brands.
Read more
3 people found this helpful
Helpful
Comment Report abuse
See all reviews

Page 1 of 1 Start overPage 1 of 1
This shopping feature will continue to load items when the Enter key is pressed. In order to navigate out of this carousel please use your heading shortcut key to navigate to the next or previous heading.
Back
Next
Pages with related products. See and discover other items: meals for camping, freeze dried, backpacking essentials, long term food storage, Camping Meals, dehydrated meals