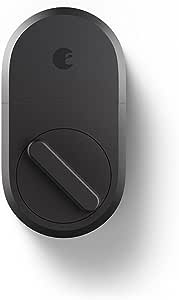 Visit the August Home Store
4.3 out of 5 stars 3,498 ratings
Available at a lower price from other sellers that may not offer free Prime shipping.

Guest access can be limited to a few minutes, hours, or days - recurring or a single occurrence.

4.3 out of 5 stars
4.3 out of 5
3,498 global ratings
How are ratings calculated?
To calculate the overall star rating and percentage breakdown by star, we don’t use a simple average. Instead, our system considers things like how recent a review is and if the reviewer bought the item on Amazon. It also analyzes reviews to verify trustworthiness.

GreenEggsHam
1.0 out of 5 stars No Auto Lock!
Reviewed in the United States on July 29, 2018
Color Name: SilverStyle: Smart Lock OnlyVerified Purchase
It does most of what it says it does but the main reason I got this particular Smart Lock was price, reviews, and that it is supposed to automatically unlock the door once your within Bluetooth range. This feature is horrible. So far out of 3 phones, only the iPhone X seems to work in this way and only 20% of the time. That means for iPhone X it DOES NOT work 80% of the time and for all Android it DOES NOT work at all. My Android phones are the Galaxy S9+ and Galaxy Note 5. If you are getting this lock thinking it will help you get in the door without fumbling for your keys then DON'T get this lock. Yes, I called support on numerous occasions and they cannot resolve the issue. In my opinion, the problem is with the app that talks to the door via Bluetooth. I think it is being automatically killed by IOS and Android OS as part of the OS housekeeping process. They need to make the app into a service so that it is ALWAYS running and I think all issues will be resolved. But nobody at August will listen to a 25 year seasoned programmer who has a lot of experience in this area.
Read more
217 people found this helpful
Helpful
Comment Report abuse

WieRok
2.0 out of 5 stars Great if you have one door
Reviewed in the United States on January 8, 2018
Color Name: Dark GrayStyle: Smart Lock OnlyVerified Purchase
Great if you have one door.
I bought three of these with the intent to outfit three of my eight exterior doors in my vacation home with plans to outfit them all eventually. I had used one of these before in an apartment and it was handy to let people in remotely. The thought for the vacation home was I could control and monitor the locks remotely to ensure all are secure as guests tend to miss locking a door or two. After installing the second lock, I was disappointed to learn that you can have only one lock connected to the August Connect (WiFi Bridge) that enables you to control/monitor your lock when not at home. I was informed they’re 1 to 1 so you much purchase a bridge for every lock. It makes sense that you’ll need one in close proximity to your door as they use short-range blue tooth technology, but In my case, I have four doors within 10 feet of each other so it wouldn’t be an issue. This means that every outlet in that small area must contain an August wall-wart. For $3 less than an August lock and bridge you can purchase a complete Schlage ZWave lock - and it comes with a keypad. Not ideal if you want to keep existing hardware for some reasons. You’ll still need a ZWave bridge, but it has the ability to interface multiple locks and other ZWave devices.

R Smith
1.0 out of 5 stars Worthless with the last update.....
Reviewed in the United States on September 21, 2018
Color Name: SilverStyle: Smart Lock OnlyVerified Purchase
Bought this lock for the auto-unlock feature. It does not unlock at all. I also bought the August connect to have it automatically unlock when I get home. I live where it rains almost everyday, all summer long. The auto unlock would have been nice, not fumbling with keys in the rain. Now I must sit in the car and fumble with the phone to unlock the door. The auto lock/lock feature does work with voice control via Amazon Alexa. Just will not auto unlock when you get home (as stated as one of the main features). You MUST get your phone out, open the app, tap on the lock then tap unlock. This works fine, but takes longer than just using your key. I have sent multiple feedback to August via the app and via e-mail letting them know that the unlock feature is not working. I have not heard anything from them nor has the unlock feature been fixed. So, for the feature I bought this lock for, not working and no response from August after multiple messages sent over the past two weeks. Because of this, I can only give this lock two stars. August, fix the unlock feature and get some C/S.

10/08/18 I have sent two more e-mails to August's non existing customer service. You guessed it, NO response. The August app has been updated a little. The August icon is now visible in the up left of my phone. It does show, home and away, BUT the auto unlock feature, still does NOT work. Hello August, this was one of your selling features and it still does NOT work.

01/22/2019 Update. I wish I could lower the star rating to ZERO stars. I have sent four or five more e-mails and several via the August App, still waiting on a real response and or a fix to get the auto-unlock feature to work. August does NOT return/answer e-mails at all. I have only received automated e-mail responses (e-mail states it is an automated response). August did push out another hardware update on 1/19/2019, it did not correct the auto-unlock feature.
Over all, If you are looking for a lock that will automatically unlock when you get home, find another lock: 1) Main feature (auto-unlock) does NOT work. 2) NO customer service. 3) Takes longer to unlock door using app than it does using your key.

02/04/2019 Received feedback from August. The problem is that my phone connects to my car's Bluetooth and wifi when I get in it. Just like many other people who have smart phones and newer cars. If you disconnect the phone form the wifi and unpair it from the car's Bluetooth (meaning you cannot make hands free calls from your car) the August smart lock/connect with start auto-unlocking. With this done, the lock works, so it is only worth three(3) stars now. If you have a August connect, it is connected to your home's wifi and your phone can unlock the lock. Bluetooth is not needed.

07/17/2019 update: With the new app update, I wish I could this this lock a negative five(5) starts. No one a August must used their own products. What they have done, If you turn of any of the following: Wifi, GPS, Bluetooth or set your phone in airplane mode, the auto-unlock disconnects and MUST be reset up. It does not matter that you turn these sub-system back on, the August App disconnects the auto-unlock feature. Then the re-setup REQUIRES you to be home to get your GPS location, to access your wifi and to connect via Bluetooth to the lock. This is the dumbest thing I have every seen a developer do. Once the setting are made, the app should store the setting so that you can turn on/off sub-system to save battery or if nothing else for security of your phone (open wifi/Bluetooth connection). This firmly displays that NO one at August really uses these products in the REAL world.

So my current option is not to waste you money on this over priced useless lock. It is dumb lock, NOT smart lock.

RichardC
1.0 out of 5 stars Dissapointed
Reviewed in the United Kingdom on December 4, 2017
Color Name: SilverStyle: Smart Lock OnlyVerified Purchase
I tried the second and 3rd generation locks, fitted by a locksmith and neither of them worked, they would not turn the lock far enough, very disappointing
Read more
6 people found this helpful
Report abuse

Vlaerka
4.0 out of 5 stars Excellent gadget & Easy install!
Reviewed in Canada on September 14, 2018
Color Name: SilverStyle: Smart Lock OnlyVerified Purchase
Used this to provide self checking access to guests an my Condo.
The app allows to send invites to the arriving guest and provide with time limited access.
So far there have been no issues with the App install and I had no issues with the app on my phone.
We will see how long the batteries last for, but currently it operates the lock lawlessly.
I took off one star due to the high price and the fact the wifi hub appears to have major issues with connectivity, if it wasn't for that, I would have most definitely acquired one, August please fix this!
Read more

AlanK
4.0 out of 5 stars Nice lock
Reviewed in Canada on June 8, 2019
Color Name: Dark GrayStyle: Smart Lock OnlyVerified Purchase
The delivery was fast and the installation did not pose any problems. Connecting with the app was also great. I bought this lock so I can open or close it via my Apple Watch 3. Another attraction was that we could maintain our existing lock hardware and look and continue to use the keys. The connection with the lock via iPhone was for the most part immediate but it took a while to connect via Apple Watch. Did this happen because the watch depends on the iPhone Bluetooth as opposed to having its own Bluetooth, not sure. Apart from meeting the Apple Watch rapid connection expectation, it met all my other expectations. Before installing this lock, you must ensure that the deadbolt is locking smoothly without providing any push to the door first. If this part of the installation is not managed well, you are going to have a negative experience.
Read more
5 people found this helpful
Report abuse
See all reviews

Page 1 of 1 Start overPage 1 of 1
This shopping feature will continue to load items when the Enter key is pressed. In order to navigate out of this carousel please use your heading shortcut key to navigate to the next or previous heading.
Back
Next
Pages with related products. See and discover other items: electric home locks, keyless smart lock, digital lock for your home door, home smart lock, Best keypad door locks for homes, Best smart deadbolt locks for doors