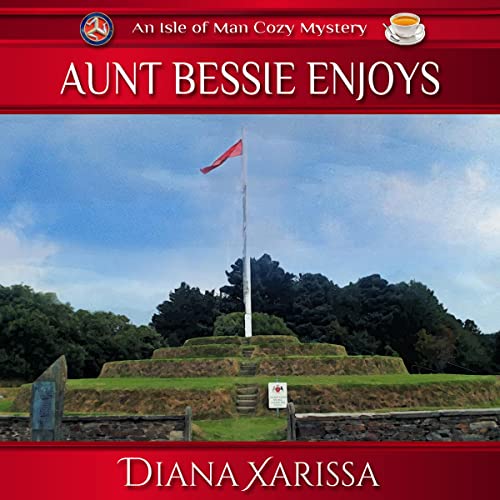 Aunt Bessie enjoys planning for a pleasurable Tynwald Day celebration with her friends.

Elizabeth Cubbon is called “Aunt Bessie” by nearly everyone in the small village of Laxey that she calls home. A number of murders have thrown her normally quiet life into turmoil, and at her age (just don’t ask her exactly what age that is), she feels like she’s had enough.

Aunt Bessie enjoys getting through the whole day without anyone stumbling over a dead body.

It’s her friend John Rockwell’s first Tynwald Day, and Bessie is delighted when she, Doona, Hugh, and Grace get to share the spectacle and festivities of the Manx National Day with him, without anything going wrong.

Aunt Bessie enjoys a quiet breakfast at home, until the police come pounding on her door.

It seems someone at Tynwald Day had murder on his or her mind after all, and suddenly Bessie finds herself caught up in the most complicated murder investigation she’s ever had the misfortune to experience. This time, Rockwell is doing his best to keep her as far away from the investigation as he can, and Doona seems to be trying to keep Bessie under constant surveillance. If there’s one thing Bessie definitely doesn’t enjoy, it’s someone getting away with murder.

This is the fifth audiobook in the Isle of Man Cozy Mystery series.

P. Blevins
5.0 out of 5 stars Diana Xarissa keeps Aunt Bessie going
Reviewed in the United States 🇺🇸 on August 16, 2015
Verified Purchase
Aunt Bessie Enjoys is the latest in the Isle of Man cozy mysteries by Diana Xarissa. It is a quick and easy book to read on a hot summer day. The climate of the Isle of Man is generally rainy which makes a hot summer day a little cooler. The characters are familiar if you have read the other books in the series which makes them like old friends. However, even friends can get into trouble.
Bessie and her friend Doona attend the festivities that surround Tynwald Day and Tynwald Hill. This is a ceremony wherein they read the laws that have been passed in the previous year in the language of Manx and then give the citizens a chance to ask any questions of the government they choose. The two ladies met up with others to enjoy the food and other activities there. Bessie would go to each table in the tents and speak to those she knew. At the table where the Raspberry Jam Ladies had their booth, Bessie was given a jar of their raspberry jam. Only one box of that had been made that year and it was given only to special people. This group had been around since the 40’s and was composed of five ladies who raised their children here and formed a group around those children. It was their version of a Girls Night group. Their husbands have all died and their children were either dead or lived on the mainland or elsewhere. The ladies would check on each other daily and were basically a “family” themselves. Bessie knew them but because she was neither married nor had children, she had not been invited to the club but stayed friends with them.
The morning after the festivities, Bessie refrained from opening her jam because she had just opened a jar of marmalade. It was a good thing because the police came to get her jar of jam because one of the ladies of the Raspberry Jam club had been poisoned and it was thought to be the jam. Luckily no one else had poisoned jam. However, at this time they do not know that. As they try to figure out where the jam came from and who was the intended victim, another of the members of the club dies in an automobile accident. The police know her brakes failed; but can’t determine if they were tampered with or not.
Who is killing off the Raspberry Jam Ladies? Are their other friends, like Bessie in danger too? What help can Bessie be to the police in solving this case?
I love this series and intend to keep reading them as they come out.
Read more
3 people found this helpful
Helpful
Report abuse

Beckett Shiona
4.0 out of 5 stars A gentle pace to these mysteries
Reviewed in the United States 🇺🇸 on April 3, 2021
Verified Purchase
If your interest is in high-speed, gory or truly disturbing mysteries, this series will definitely not be your cup of tea (an ironic statement, since so many cups of tea are served during the stories!) But if you are looking for a relaxing, slow-paced read, well-written, with lots of character development and more psychological searching for answers than forensics, then you will definitely enjoy the Aunt Bessie mysteries. Like Miss Marple or Jessica Fletcher, elderly sleuth's Bessie's ability to assist in solving mysteries lies in her knowledge of the people possibly involved--an ability recognized and appreciated by the local constabulary. The "dinner and discuss" scenes always leave me hungry! This particular mystery had quite a number of red herrings, and the ending came as a bit of a surprise to me, although I'm a seasoned reader of many cozies. As always, learning a bit more about the Isle of Man was a fascinating undercurrent to the story. Not high speed territory at all, but certainly a gentle and relaxing read, particularly in this time of pandemic and isolation.
Read more
Helpful
Report abuse

Kindle Customer
4.0 out of 5 stars Aunt Bessie series
Reviewed in the United States 🇺🇸 on October 7, 2020
Verified Purchase
I love the Aunt Bessie series, however, I am in the middle of book 6 and the author keeps jumping between 2 names for the apartment complex. First it is Seaview Terrace and then it is Seaside Terrace. There are many grammatical errors throughout the series also. The stories are great but the errors really slow down the stories. I wish more of the authors would have proof readers!
Read more
Helpful
Report abuse

DeeDee Brown
4.0 out of 5 stars A Really Great Mystery But An Ongoing Problem Remains
Reviewed in the United States 🇺🇸 on May 19, 2015
Verified Purchase
It's good to catch up with Aunt Bessie and her friends as they solve another mystery. This one seemed a bit darker and more personal. The ending left me surprised. I look forward to the next mystery.

I will once again touch on the overuse of the word 'pudding'. At this point it seems deliberate. Diana Xarissa is a talented writer. Part of being a talented writer is finding ways of expressing things in a unique manner. Since the Aunt Bessie mysteries follow a familiar formula for each book, it is important to not bog down the stories with repetition. I enjoy their little group's get togethers over food; it is cozy and comforting. However, when the word 'pudding' is used over and over and over again, it gets old quickly. There are many synonyms for this word and I really wish Ms. Xarissa would start using them.
Read more
One person found this helpful
Helpful
Report abuse

Kindle Customer
4.0 out of 5 stars Very pleasant series
Reviewed in the United States 🇺🇸 on January 20, 2020
Verified Purchase
The Raspberry Jam Ladies have been friends for years when one of them does from poisoned raspberry jam. Aunt Bessie and Donna go to offer their sympathy to the rest of the group. Who would want to kill a little old lady?
Read more
Helpful
Report abuse

Sass
5.0 out of 5 stars 5 Star Mystery
Reviewed in the United States 🇺🇸 on April 20, 2015
Verified Purchase
Great book! Very Miss Marple-like (if that's not an adjective, it should be): this one didn't rely on the gang getting together to toss around ideas. In fact, there was comparatively little of Hugh and Rockwell in this one. A well paced plot; although there was a lot to the story, it moved along quickly and kept me turning pages. There were a few red herrings, too. Kept me guessing until the end and I can guarantee you won't guess the ending of this book. Very satisfying conclusion that ended quickly but not abruptly. Truly a well-written mystery and a great series.
Read more
Helpful
Report abuse
See all reviews

Karia..
5.0 out of 5 stars dangerous place to live
Reviewed in the United Kingdom 🇬🇧 on January 27, 2017
Verified Purchase
I love Aunt Bessie! She has become a real character in my mind, feisty, intelligent, slightly intolerant of bad behaviour yet lovable at the same time. Clearly a slightly unreal not there. The Isle of Man joins Midsomer and Oxford as being a dangerous place to live, judging by the body count in a short time span. The only thing that strikes me as fictitious is the quantity of food, particularly biscuits she and her friends consume.
Read more
Report abuse

Shirley
5.0 out of 5 stars Excellent read
Reviewed in the United Kingdom 🇬🇧 on May 5, 2016
Verified Purchase
I'm steadily working my way through the Aunt Bessie mysteries. So far I have enjoyed every one of them.
Read more
Report abuse

Norma Rowles
5.0 out of 5 stars Five Stars
Reviewed in the United Kingdom 🇬🇧 on September 21, 2016
Verified Purchase
I read a good story with some humour but also learn about the Isle of Man.
Read more
Report abuse