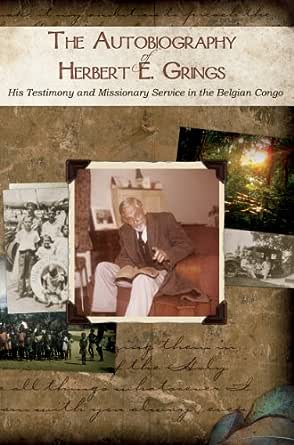 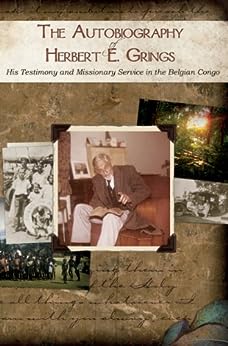 The Autobiography of Herbert E. Grings: His Testimony and Missionary Service in the Belgian Congo Kindle Edition

4.6 out of 5 stars
4.6 out of 5
38 customer ratings
How does Amazon calculate star ratings?
Amazon calculates a product’s star ratings based on a machine learned model instead of a raw data average. The model takes into account factors including the age of a rating, whether the ratings are from verified purchasers, and factors that establish reviewer trustworthiness.
Top Reviews

Nora
5.0 out of 5 stars A Faithful Missionary Family
Reviewed in the United States on November 27, 2016
Verified Purchase
Do not judge a book by its cover; this is a wonderful story about a missionary family and like many missionary stories, this one is worth telling to the glory of God. One of my favorite parts in the book, is about how God had healed Mr. Grings while he was attempting to depart the country to return back to the United States. In his own words:
"I opened up this cellar to let it air out. The next evening I picked up a trunk and stepped down into the cellar with my bare feet because there was loose sand in the hole. As I did so I felt something sting my heel. I jumped out and looked at my heel. There were two drops of blood about half an inch apart. I took a light and looked into the cellar. There was a small but poisonous adder which had bitten me in the heel. I killed it with a bush knife and put it in a tin can on the table so if I died, the people would know what it was that killed me."
"I knelt down and told the Lord that I was not afraid to die because I knew He had saved me. It seemed heaven opened, and I could see the beautiful city. I wanted to go, but a little voice whispered, 'What will become of your children who are expecting you to meet them at the railroad station?' I said, 'Yes, Lord, for my children's sake, heal me of this snakebite.' It seemed a pressure came on my right side, and I vomited blood. Then I was sure I would not die."
He lived to see his children later on, after riding his bicycle to reach them. When he should have been dead, he received anti-venom treatment. It was a beautiful miracle from God. The book goes on to recount the outcome of the five children. They went on to follow in the footsteps of their faithful parents; serving the Lord in foreign soil. I highly recommend this book to all those interested in missionary work.
Read more
2 people found this helpful
Helpful
Comment Report abuse

James L. Swindle
5.0 out of 5 stars A fascinating missionary biography
Reviewed in the United States on August 23, 2019
Verified Purchase
This is a well-written short autobiography of a missionary who was in the Congo from early to mid 20th century. He tells of everything from snakebite to deaths to shipwreck, and does so without bitterness or self-pity. There's a brief appendix giving a summary of his children's lives. If you love the Lord's worldwide work, read this book.
My only criticism is that when reading the Kindle version on a Kindle Paperwhite, the photos were mostly too small to get more than a general idea of what they showed.
Read more
Helpful
Comment Report abuse

Kindle Customer
3.0 out of 5 stars I did not read this book
Reviewed in the United States on March 2, 2020
Verified Purchase
I had downloaded this book months ago, thinking I would be interested in this book, but changed my mind and did not read it...nothing against the book, just that my interest isn't in it any more and I have too many other books I want or need to read.
Read more
Helpful
Comment Report abuse

M.J. Freeman
5.0 out of 5 stars Good missionary story.
Reviewed in the United States on November 11, 2017
Verified Purchase
Fascinating! I couldn't put it down. I love missionary biographies. These dear men and women literally threw themselves at the darkness, sometimes at the cost of their own lives or their families lives, in order to share the light of Jesus with a lost and dying world. Heroes of the Kingdom.
Read more
Helpful
Comment Report abuse

C. Beatty
5.0 out of 5 stars A Simple Biography
Reviewed in the United States on January 13, 2017
Verified Purchase
The book is short, simple and to the point--no flourishes or embellishments. I wish it were longer and went into more detail, but it is what Mr. Grings chose to write about his life. He was dedicated to the Lord and is an inspiration for others who want to serve the Lord.
Read more
One person found this helpful
Helpful
Comment Report abuse

DD Kay
4.0 out of 5 stars A good missionary biography
Reviewed in the United States on July 5, 2018
Verified Purchase
A good missionary biography. Enjoyable and inspiring reading. The writing could be better, but the content is well presented and the book reads well. It was particularly nice to also find out what became of his descendants.
Read more
Helpful
Comment Report abuse

Robert Patton
4.0 out of 5 stars Eccentric but faithful and effective
Reviewed in the United States on December 29, 2012
Verified Purchase
This short book outlines the life of Herbert Grings, missionary to both Africa and South America. Grings was definitely a bit eccentric, but effective. What is most impressive is the number of missionaries who have come from his family, now in the fourth generation. Matthew Champlin, who helped rewrite the book, is himself a 4th generation missionary from Grings.
Robert. D. Patton, M.D., D.d.
Read more
3 people found this helpful
Helpful
Comment Report abuse

Ozpreacher
5.0 out of 5 stars excellent
Reviewed in the United States on December 26, 2014
Verified Purchase
Every missionary, whether to a foreign land or to their homeland, should read this book and learn from a man who had the spirit of the Apostle Paul. Not all people are called to do the work of Grings, but all would benefit from reading of the grace of God shown through his life. His works have followed him. He is worthy of following as an example of one who followed Christ.
A little known hero of the faith.
Read more
3 people found this helpful
Helpful
Comment Report abuse
See all reviews from the United States

Kindle Customer
4.0 out of 5 stars Good.
Reviewed in the United Kingdom on June 16, 2018
Verified Purchase
Interesting autobiography. Had never heard of this man. Worth reading.
Read more
Helpful
Sending feedback...
Thank you for your feedback.
Sorry, we failed to record your vote. Please try again
Report abuse