You've subscribed to Season of Faith Series! We will preorder your items within 24 hours of when they become available. When new books are released, we'll charge your default payment method for the lowest price available during the pre-order period.
Update your device or payment method, cancel individual pre-orders or your subscription at
Your Memberships & Subscriptions
There was an error. We were unable to process your subscription due to an error. Please refresh and try again. 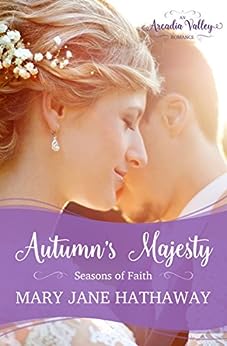 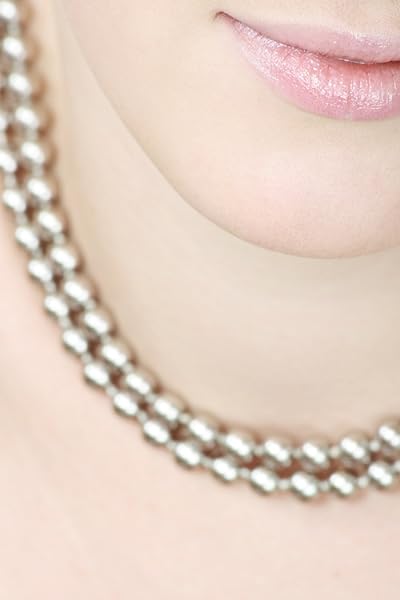 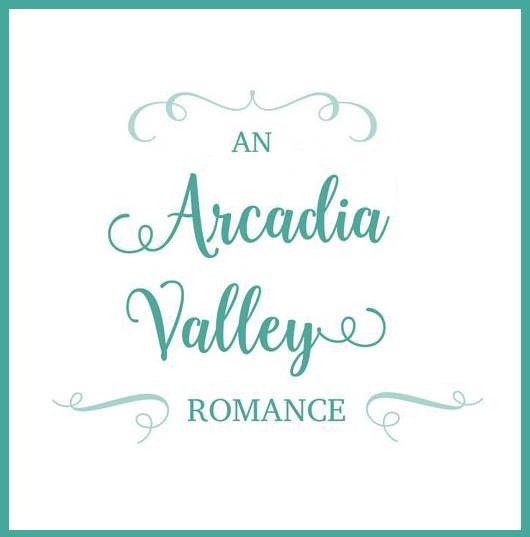 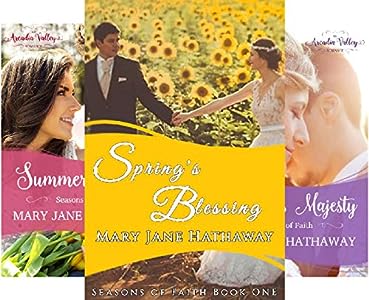 R. Miller
4.0 out of 5 stars 4.3 stars: Autumn's Majesty by Mary Jane Hathaway
Reviewed in the United States on January 7, 2021
Verified Purchase
After a very public mistake at a wedding, Jamie decides to change her personality, hoping people will like her better; Theo also thinks he needs to make some changes, and it takes some time for them to actually realize their attraction is mutual and they are valuable just as they are.

Plot and Setting: 4 -- This is a very sweet, cute romance. A bit of a comedy of errors as they misunderstand each other/ say the wrong thing/ decide they aren't good enough. The timeline was relatively clear, until the end (the epilogue in particular was rather vague on how much time had passed), but I confess I'm confused as to why it's called Autumn's Majesty when the vast majority of the book takes place in summer.

Characters: 4.6 -- I like both Jamie and Theo, and it's pretty cute how they each make the other uncharacteristically tongue-tied. They each make their fair share of mistakes and missteps, but come around to being in better places as individuals and together. Some good moments with family and friends, plus a lot of people mentioned in passing. I would've liked more about Jamie's parents.

Mechanics and Writing: 3.5 -- Generally skillful writing. Errors include: compound word confusion, mild punctuation or formatting issues (including some misplaced commas, and oddly irregular indents), use of the wrong word (go for got, look for looking, etc) and a few words dropped altogether. A few inconsistencies that were a bit confusing, but mostly it was just little errors that apparently slipped through during editing. POV Alternates between Jamie and Theo.

Redeeming Value: 5 -- Very clean. I can't think of anything that might ruffle feathers. Strong theme of not changing yourself because one person criticizes, but to instead listen to godly friends and family for their loving advice. Also being careful before you speak, avoiding gossip, helping neighbors, and not putting yourself down for your appearance.

Deutsche OMA
3.0 out of 5 stars Be true to yourself and love
Reviewed in the United States on August 17, 2017
Verified Purchase
If possible I would give this romance a 3.5 rating. The editing of this story was much better. Bringing in the Cane River Series characters was confusing for new readers, therefore the three rating. During the second half of the story, Jamie and Theo finally address the white elephant in the room. Ms. Hathaway does an good job explaining life on a blueberry farm and the trauma a family experiences during and after loosing everything to a fire. Something this avid reader can identify with having lost everything to a house fire and living in an agricultural community. Michigan produces lots of blueberries and other fruits. Good resolution to this romance. Enjoyed how the students were involved.
Read more
2 people found this helpful
Helpful
Report abuse

Summer Kinard
5.0 out of 5 stars An Insightful Book in a Wonderfully Ecclectic New Series
Reviewed in the United States on December 1, 2017
Verified Purchase
I've loved every other book by this author, so I looked forward to digging into her new series. I was not disappointed. This book has many of the hallmarks of Mary Jane Hathaway books: rich and wonderful friendships, a strong sense of place and history, kind and strong men and women, good food, people with a wide variety of Christian traditions, and life wisdom passed along seamlessly. On top of all that, the heroine Jamie is one of the most relatable characters I've ever read. She's not as pretty as her friends, and she struggles to see her gifts in their true light, to see herself in the true light of God.

As an Orthodox Christian reader, I also like that this series has Greek Orthodox characters, since they're so rarely represented in fiction. Though there is not anything particularly Orthodox about any of the customs or prayers (and nary an icon is mentioned), readers who are familiar with the Greek church will recognize the hallmark hospitality and love of kindness and good works.

I'm looking forward to reading more in this new series, as I have loved the previous ones so much. Without adding spoilers, I will mention that you might recognize a few folks visiting from the Cane River Series, too! Highly recommend this clean read.
Read more
One person found this helpful
Helpful
Report abuse

Sue Peacock
5.0 out of 5 stars Complete in Him
Reviewed in the United States on May 8, 2018
Verified Purchase
Jamie loved Theo but felt she couldn't measure up to the kind of girl who would attract him. She didn't like her looks or her personality, so she arrived to change herself in hopes of attracting him. Theo liked Jamie but always got shy and tongue- tied in her presence. When a committee member said Theo lacked leadership ability and turned down his application for assistant principal, Their strived to change This by working as a manager at Jamie's family blueberry farm during summer break. This story followed their struggle to reveal their true feelings about each other and accept God's completeness.
Read more
Helpful
Report abuse

Lori
5.0 out of 5 stars Sweet and Savory Love Story
Reviewed in the United States on August 17, 2017
Verified Purchase
I adore Mary Jane Hathaway's books and this one is another delightful read. Ms. Hathaway has a way with characters. She makes them so real, flaws and all, yet still likable. This book is a sweet love story set in a community we'd all love to be a part of. I enjoyed reading about Jamie's journey of accepting and embracing the person God made her to be. You will enjoy it too. An added bonus is there is a cameo visit from a few characters from Ms. Hathaway's fantastic Cane River Series, some of my most favorite books that I've read recently. I highly recommend Autumn's Majesty.
Read more
One person found this helpful
Helpful
Report abuse

Kindle Customer
5.0 out of 5 stars Great clean book
Reviewed in the United States on October 24, 2017
Verified Purchase
Jamie and Theo are my new favorite couple. Suffering from low self-esteem hits pretty close to home. I understand what it feels like to think you're not pretty and you're always sticking your foot in your mouth. The editing wasn't as good as most of this series. I loved the slow pace of the book.
Read more
One person found this helpful
Helpful
Report abuse

Sal
5.0 out of 5 stars Great read
Reviewed in the United Kingdom on August 14, 2018
Verified Purchase
Really enjoyed this book as i especially could relate to some of jamies issues. Only problem was that there were a few typos and names written wrongly which was annoying but didnt spoil the story.
Read more
Report abuse

Mary
4.0 out of 5 stars great light read
Reviewed in Australia on September 21, 2017
Verified Purchase
great light read, though I did not enjoy this as much as other books in the series I felt it was a bit too slow.
Read more
Report abuse
See all reviews