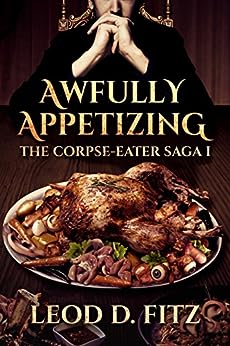 by Leod Fitz (Author), Monique Happy (Editor) Format: Kindle Edition
Book 1 of 4: The Corpse-Eater Saga
See all formats and editions
Sorry, there was a problem loading this page. Try again.
Walter Keppler is a quiet, private man. He lives in a trailer park at the edge of town, and is working hard to pay off the startup loan he needed for his funeral home. In his spare time, he likes to camp, fish, and eat roadkill.
Walter Keppler is a ghoul, raised by humans. He’s one of the many monsters who calls the town of Collinswood Colorado home, but he’s spent most of his life struggling against his darker nature, and trying to stay as far away from the rest of the creatures of the night as he possibly can.
Unfortunately, they’re not willing to stay away from him. After an attempt on his life, Walter must abandon his quiet life and embroil himself in a world of blood, violence, and political intrigue. And somewhere in all of that, he needs to buy his mother a birthday present.

Next 4 for you in this series See full series
Total Price: $8.97
Books In This Series (4 Books)
Complete Series
The Corpse-Eater Saga
Kindle Edition
Page 1 of 1Start OverPage 1 of 1
Previous page
Next page

EdLincoln
5.0 out of 5 stars Horror Movie Imagery Used for Urban Fantasy Protagonist
Reviewed in the United States on January 29, 2020
Verified Purchase
In some ways this is a standard urban fantasy series, but they didn't use the Action Girl in love with a Master Vampire or Trenchcoated Detective as the hero. They also made the protagonist a ghoul just trying to get by. They did the standard urban fantasy thing of making horror movie monsters good guys, but instead of making them all sparkly they actually kept the disgusting and horrifying descriptions. The protagonist is a casually repulsive creature who prefers his food rotting and describes himself as "scuttling across the floor" when he isn't worrying about his money problems. It was a fun comedic book with a unique voice. They managed to capture the Everyman Getting By vibe while having horrific scenes, and to combine an asocial protagonist with warm family moments. I'd compare it to the Vnmpire Accountant Fred series or Gaiman...less comedic and "wish fulfillment" then the Fred novels. Almost seems British in tone. Refreshingly original.
Read more
6 people found this helpful
Helpful
Report abuse

Lukasz
4.0 out of 5 stars Engaging and entertaining
Reviewed in the United States on April 9, 2019
Verified Purchase
Ghouls. Not likeable. Carrion eaters. Not as sexy or dangerous as vampires, or romantic as werewolves who try to tame their inner beast. If they appear in urban-fantasy at all, they do so as secondary characters supposed to make the lore richer.

Leod D. Fitz picked a ghoul as his POV character. Walter, raised by humans, and mostly socialized owns a morgue where he has access to decomposing bodies and where he can have a nice snack, an excised tumor for example. He likes his meat tenderized. The nastier it smells, the better it tastes.

His love life sucks, partly because of his bad looks, partly because Ghouls sexual behavior would devastate most willing human partners. Having little choice and even less money to pay for it, Walter finds some release in autoerotic asphyxiation.

Not your usual urban-fantasy hero, right?

Despite his off-putting behavior (by human measures), Walter is actually a decent guy and a caring son to his human adoptive mother. He wants to lead a quiet, solitary life and have regular meals. Instead, he finds himself pursued by murderous hunters, hounded by werewolves, and embroiled in the absurdly complicated world of vampire politics.

I felt tempted to DNF this book because of detailed (but not overly graphic) descriptions of Walter’s culinary tastes and sexual activities I can’t relate to. Obviously, I didn’t. Something in the prose and Walter’s wry and dark humor kept me engaged. I finished enjoying the story.

Parts of it are gross and I could do with less of realism, but I praise the author for exploring his character and his "ghoulness” fully. Leod created a repulsive character that’s hard to dislike and easy to root for despite his otherness.

Walter doesn’t predominantly examine the world through sight, and many scenes reflect it when he first “sees” things through smell and sound. I appreciate his dry wit, and resourcefulness. Contrary to other supernatural beings or human hunters, Walter doesn’t act as a predator and he tries to avoid violence.

The writing tends toward the humorous but I wouldn’t call the humor proper, especially when things do get gross and off-putting. That said, some passages are hilarious and nicely written. As for the characters, apart from Walter, all of them feel one-dimensional and I suspect many readers will dislike representation of females. The only important female character, a freshly turned vampire, is a sexy and sex-obsessed gal who spends a lot of other people’s money on clothes.

If Family Guy doesn’t offend you and makes you laugh, and you don’t look for a proper representation of both sexes in your fiction, chances are you’ll enjoy Awfully Appetizing. I did. Despite its flaws and shortcomings. I find Walter’s voice engaging and entertaining.

SEAC
4.0 out of 5 stars Fun
Reviewed in the United States on January 3, 2021
Verified Purchase
Last year (2020) one of my book challenge s was to read a book told from the perspective of a monster. I found it hard to pick one I would enjoy.. This one would have fit the bill perfectly.
Simply said this book is humorous and fun. I learned a bit about ghouls since a ghoul was a main character.
That ghoul gets caught up in some dangerous vampire drama. Even during the action sequence s, humor was splashed in and held my interests. Even the supporting characters are fun.
If you want to explore a fictional monster world and laugh a bit, you would enjoy this book
Read more
2 people found this helpful
Helpful
Report abuse

Danielle Omordia
5.0 out of 5 stars Awfully Appetizing
Reviewed in the United States on March 15, 2022
Verified Purchase
What a lovely find for free! I loooove horror comedy, so finding this was a treat. And then the protag is an unusual monster was just the cherry on top. I like the set up of the universe and the politics of how these supes interact with each other.

There was so much in here that was so deadpan and anticlimactic but in a hilarious way. Seriously this story had me rolling. And I like how Walter's character is self interested but also willing to do a good deed now and then.

Not a novel for the faint of heart, but if you can stomach brain sludge, juicy insects, and heads being bitten off, then you'll find this story awfully appetizing indeed ;D
Read more
Helpful
Report abuse

Brian Kaufman
5.0 out of 5 stars Rabbit Hole Reviews - A True Original
Reviewed in the United States on September 27, 2015
Verified Purchase
Walter has the perfect job. He runs a funeral home, which allows him a quiet, secluded lifestyle, fitting his personality. The job has additional benefits—the food is good.

Walter, you see, is a ghoul.

That’s right, a ghoul. The carrion of night creatures. Leod Fitz’s Awfully Appetizing is a paranormal novel, book one of The Corpse-Eater Saga. Yes, there are werewolves and vampires, but taking center stage is one of the more outrageous protagonists in recent memory. Raised in a human home, Walter enjoys his solitary existence, but longs to fit in to the human world. Now, both home and health are at risk as Walter finds himself at odds with various paranormal factions. And someone—maybe everyone—wants him dead.

Though Fitz seems to relish the more horrific scenes, you may find yourself more surprised at the wit, owing much to Walter’s first-person voice. The political subtext is razor sharp, particularly when it recalls high school cliques. The prose is clean and the dialog is trigger-quick:

The girl glowered at me, catching the rabbit mid-air. “I want a human.”
I shrugged, “And I want a pony.”

I don’t enjoy many stories in this genre. But this Winlock Press release had me from the first few pages. (Five stars out of five)
Read more
3 people found this helpful
Helpful
Report abuse
See all reviews