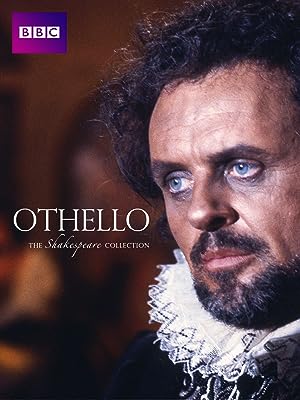 Rentals include 30 days to start watching this video and 7 days to finish once started.
Add to
Watchlist
Redeem a gift card or promotion code
By ordering or viewing, you agree to our Terms. Sold by Amazon.com Services LLC.
Write review

SauropodReviewed in the United States on December 19, 2016
5.0 out of 5 stars
Impressive Dramatization
Verified purchase
Solid dramatization of Shakespeare's classic. Hoskins is a standout as Iago. As Othello, Hopkins is best in the earlier scenes, when he underplays the role with studied dignity. His later, more emotional scenes are perhaps a bit less effective, as he changes from aloof indifference to weepy histrionics in record time – though this partly has to do with the somewhat unrealistic speed with which Othello is convinced of Desdemona's infidelity.

The performance was videotaped in 1981 and shows its age at times. Some of the dialogue is muddled, either because of excessive background noise or because the actors are speaking over each other. Desdemona's dying lines are almost inaudible. But for the most part, the audio track is good enough.

I would definitely recommend this dramatization, especially for Hoskins' superior interpretation of Iago and for Hopkins' quietly dignified portrayal in the first two acts.

Ann BobesReviewed in the United States on March 21, 2022
3.0 out of 5 stars
Fine acting, though make-up coloration of titular actor off-putting
Verified purchase
The film shows its datedness by using not a Moorish-looking actor to play Othello, but a Caucasian person painted to look dark-complected. Even the actor's handling of the magnificent language did not allow this viewer to enter into the well-known story. BBC would do well, if it re-makes its Plays by Shakespeare series, to use a racially-authentic actor in the titular role.

MarciaReviewed in the United States on September 17, 2017
4.0 out of 5 stars
so it's fantastic. However
Verified purchase
It's Anthony Hopkins, after all, so it's fantastic. However, the recording is dated and with Hopkins in blackface, it's a bit politically incorrect. Nonetheless, he's a great actor and an important part of how 20th century audiences experienced the play. Try to get over the plague of P.C. and enjoy. View other representations for an historical perspective on how the world carries on Shakespeare's stories.
5 people found this helpful

🌸Reviewed in the United States on June 9, 2018
5.0 out of 5 stars
Helpful
Verified purchase
We did an Othello unit in class, and this is the closest movie I've found that follows the original plot and text very accurately. It was interesting, the actors did well, it's pretty easy to understand.
7 people found this helpful

Susan HarrisonReviewed in the United States on May 19, 2015
5.0 out of 5 stars
Fantastic Version of Othello...highly recommend
Verified purchase
This is an amazing find and I think the best thing I have ever seen Sir Anthony Hopkins do. His control of the language, underplay, and
his capacity to play his emotional instrument so effectively is incredible; he literally transforms as the jealousy and doubt Iago feeds him
take over his mind. Bob Hoskins was the perfect Iago, scary in how likable he is and yet he is the ruin of everyone. This production
makes the story clear and attainable. I highly recommend it and especially if you are just getting introduced to the play. Fantastic
cast and costumes...Love it!
6 people found this helpful

Bradley W. BleckReviewed in the United States on March 6, 2014
5.0 out of 5 stars
Great leads
Verified purchase
Anthony Hopkins is a great actor, and it takes great actors to make Shakespeare work. Bob Hoskins is a great Iago, one of the best bad guys in the whole of literature. If there's a problem, it's Othello needing to be more clearly of African descent than Hopkins can pull off. Thank God it's not like Laurence Olivier's "black face" rendition of the same role, but sometimes I have a hard time with it. Despite the great performances at the top of the cast, many of the secondary characters, and even Desdemona, and Amelia, don't quite work for me. But these characters don't much matter. It's the interplay between Iago and Othello that really make this play, and to a lesser degree between Othello and Desdemona and Iago and some of the others, such as Cassio. Hopkin and Hoskins make it all work.
4 people found this helpful

Kindle CustomerReviewed in the United States on February 12, 2014
5.0 out of 5 stars
Sparkling performances.
Verified purchase
What makes this play succeed is a complex and irresistible rendering of Iago. Anthony Hopkins is clear, dominating, and seems in his first soliloquy irresistible both to the other characters and to the audience, until Iago demonstrates how profound and malign irresistibility can be. Bob Hoskins seems made for this part - he's short, quick, charming, and funny. No other character really stands a chance, and neither does the audience. A most accessible and satisfying production.
8 people found this helpful