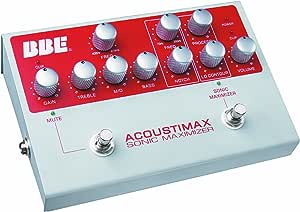 4.0 out of 5 stars
4 out of 5
70 global ratings
How are ratings calculated?
To calculate the overall star rating and percentage breakdown by star, we don’t use a simple average. Instead, our system considers things like how recent a review is and if the reviewer bought the item on Amazon. It also analyzes reviews to verify trustworthiness.
Top reviews

Jack and Frances
4.0 out of 5 stars Good, with caveat as noted.
Reviewed in the United States on December 14, 2018
Verified Purchase
I am back to using this box full time, because I like the sound. It has the best and easiest user interface and gets me the best sound. I'm not saying that there are not other pre-amps that sound good.

I had a big problem in one gig, and stopped using it for several months, but the problem did not recur when I began to use it again in situations where a failure would not be a disaster, and I kept a backup box handy. I conclude that the problem I had was an unidentified electronic gremlin. I never figured it out. My local repair guy looked the BBE pedal over thoroughly afterward and found nothing wrong.

I leave my previous five star review intact below.
We purchased this in April '18 and I used it for seven months for four gigs a week plus, and as reported in my original review, liked it a lot. Recently in the middle of a gig it began to emit a high-frequency squeal which certainly ruined the musical moment, with the clip light on the right side flashing. I had not dropped or abused it, and all the setting were as they had been for several months. When I unplugged the guitar, it continued to squeal and the clip light kept blinking. So - quality control? Random failure? I don't know, and it isn't really my problem since I have something else that works...

I like it and am using it to gig regularly with a nylon-string guitar and piezo pickup without internal electronics, run directly into this box with a regular 10' instrument cable, and output to a mixer using the XLR DI output. It has just the capacities I need for a nice, clean acoustic guitar sound, and nothing more.

1. The BBE Acoustimax processor is housed in a metal box with metal knobs, except for the small plastic switches in the back, and feels like it could be banged around and not suffer. It is a little larger than most stomp boxes, and a little bit heavy, but no complaint here.

2. It has a very clear user interface, without too many bells and whistles. Each knob is clearly labeled, and does just what it does; they are large, knurled and easy to turn. I was able to dial in the sound I wanted very quickly, and had no trouble understanding the procedure. The Zoom A3, by contrast, has a nightmare of a user interface and squirrely little multi-function knobs, although it has a very good sound and many more effects than this box. The Boss AD-2, which I have also used, does not produce as nice-sounding an output and requires additional signal processing.

3. There are three basic components: EQ, a notch filter, and the proprietary Sonic Maximizer, which has only two knobs and a foot switch. The notch filter, essential for acoustic guitars, works very well and is adjustable for both frequency and amplitude, with a knob for each. The EQ has a nice sweepable mid so that you can cut or boost any part of the frequency range.

5. Although I have read criticisms of the Sonic Maximizer, it really does improve the sound. I see no drawback, and it can be turned off.

Criticisms:
1. It doesn't yield as hot a signal as the Zoom A3. The volume knob has a very narrow range, and apparently only works by attenuating the full signal of the output, judging by the result of using the switch on the back which bypasses the volume knob.

2. Proprietary wall-wart power supply. By contrast, the Zoom A3, thinking state-of-the-art, has, besides batteries and wall-wart, a USB cable to plug into any USB power supply, very handy; this ought to be easy to add nowadays, and our mixer has a single USB power supply output which eliminates one wall-wart nine-volt transformer.

3. It doesn't have any other effects. However, this probably makes it better at what it does do.

4. It doesn't have a boost switch. Now, I don't need this, because I am perfectly happy just playing softer or louder as necessary, but I observe that the Fishman box has a boost switch and that this seems to be important to some guitarists.

5. If there were one additional effect I could wish for, it would be a simple reverb, but this is unreasonable since I could run another pedal for that (as it is, I use the mixer, which has an effects bank).

However, I still give it 4 stars for doing its job well, having a simple, clear interface and a great sound, and dock it one star for a still mysterious and inexplicable failure, and for the fact that I still nervously carry another preamp for backup.
Read more
5 people found this helpful
Helpful
Report abuse

Shannon Hansen
5.0 out of 5 stars Great pedal
Reviewed in the United States on September 4, 2019
Verified Purchase
I've been using this pedal for church worship for about 4 years now. It is really nice sounding. I love the BBE sonic maximizer effect. Nearly 20 years ago I used to play with guy who had a BBE sonic maximizer rack module and he would play a cheap guitar through it but it sounded awesome in the house. I had an awesome guitar and was using LR baggs para-acoustic DI with a chorus pedal (subtle setting) and it couldn't touch the tone he could get with the BBE module. When my para-DI went bad I needed another direct box and I was happy to find this. I have never had any problems with it and it is well made.
Read more
One person found this helpful
Helpful
Report abuse

DIR
5.0 out of 5 stars Great acoustic DI
Reviewed in the United States on October 13, 2014
Verified Purchase
I've been searching for a good preamp/DI for my acoustic sound for a while now. I've tried a few other options all with good results, just not great ones. I ordered this when I saw the price drop figuring it's worth a shot. I am really glad I did!
Cannot express how impressed I am with the sound. I typically run through a DI (I've used/tried run of the mill whirlwind, a Zoom A3, Ultrsound acoustic DI, Fishman Aura and a couple other straight DI's) to the PA. I set this up the same way and with just a little bit of EQ and adjusting the sonic maximizer (via the Process and Lo Contour) I got probably the best sound I've heard out of my gear plugged in. It really was that easy. Really rounded out the low end and gave a nice chime to the top without being harsh. I have no doubt over the weeks that as I get a little more dialed it's going to be even better.
Has really all the features I wanted - DI out, tuner out, pad, ground lift, EQ (really like the sweepable mid), notch, mute and can bypass the maximizer if needed. Really a great piece of gear. Looking forward to getting even more out of it.
The only gripe I have at all is the use of a 12V power supply. A 9V would be preferred as I'm sure most guitar players have a spare 9V PS laying around somewhere if the stock one decides to go out. I will likely purchase a spare 12V wall wart just to have in my bag should this ever happen. For the quality of sound provided by this piece I'll take this minor inconvenience!
Read more
7 people found this helpful
Helpful
Report abuse

Arun Shenoy
5.0 out of 5 stars Solid build quality and great tone
Reviewed in the United States on December 18, 2018
Verified Purchase
I bought two of these units after I feel in love with it. It is build like a tank and weights a ton (Seriously). The mid sweep function is incredible and really helps bring out the rich mid range frequencies. The notch filter is good for any kind of feedback issues. I honestly did not quite see my audible benefit from the much touted sonic maximizer feature. Then again, maybe I was not using it right. Overall an excellent pre-amp for your piezo electric pickup and can DI straight to the mixer or audio interface using an XLR cable. The other interesting aspect is the FX loop which I use to add some time modulation effects like delay or reverb.
Read more
One person found this helpful
Helpful
Report abuse

John Draper
4.0 out of 5 stars A Good Acoustic Guitar Preamp With a Little Something Extra
Reviewed in the United States on June 13, 2014
Verified Purchase
I wanted to get a preamp that would work well with my Dobro that has a passive pickup, and I've always liked my BBE Sonic Stomp petal. I figured this would be a good choice at an unbeatable price (I got it for only $116. The unit is pretty hefty--maybe seems bigger and heavier than it should, but does what it's supposed to do. It feels very solid and gig-worthy (as expected from BBE), and the Sonic Maximizer warms up the tone as expected. The controls are straightforward (gain, volume, EQ, etc.), but it might take a bit of experimentation to get the sound you want from the SM. If you don't like the SM sound, you can always bypass it with the pedal. I also really like that it has a mute pedal: just stomp and unplug without blowing any of you other gear.

I don't know if the sound you get from this thing will suit everyone's taste, but it meets its intended purpose with no problems. If you're looking for an acoustic preamp for a good price (while it lasts), and if you like BBE's Sonic Maximizer, then this is a no-brainer.
Read more
4 people found this helpful
Helpful
Report abuse
See all reviews

Page 1 of 1 Start overPage 1 of 1
Previous page
Next page
Pages with related products. See and discover other items: acoustic guitar pedal, acoustic guitar pedals, acoustic instrument, equalizer for electric guitar, distortion pedal eq, guitar equalizer
Back to top
Get to Know Us
Make Money with Us
Amazon Payment Products
Let Us Help You
EnglishChoose a language for shopping. United StatesChoose a country/region for shopping.
© 1996-2021, Amazon.com, Inc. or its affiliates