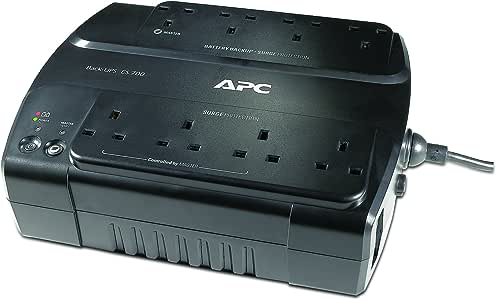 Visit the APC Store
4.5 out of 5 stars 606 ratings
Available from these sellers.

4.5 out of 5 stars
4.5 out of 5
606 global ratings
How are ratings calculated?
To calculate the overall star rating and percentage breakdown by star, we don’t use a simple average. Instead, our system considers things like how recent a review is and if the reviewer bought the item on Amazon. It also analyzes reviews to verify trustworthiness.
Top reviews

Jazzman
1.0 out of 5 stars Unreliable
Reviewed in the United Kingdom on May 23, 2018
Verified Purchase
Bought this as we were having frequent short power cuts and I was concerned that one of them might damage my system drive. Unfortunately I have found this UPS to be completely unreliable. There have been about ten power cuts over the last 18 months, varying from short glitches to ten minute outages, and for four or five of them the unit simply has not kicked in and my PC has immediately gone down.

I tried tweaking the unit's sensitivity setting to no avail. The battery is always fully charged so no problem there. It has worked on some occassions, especially in the first six months, so the issue is perhaps intermittant, but what's the point of a UPS that works sometimes? The documentation also admits that very short outages won't be logged - this suggests to me that they are fully aware that the unit has issues. Why can't it log short outages? Presumably because it sometimes doesn't notice them.

I would have sent it back but its quite hard to prove that it doesnt work and then there's the pallaver of sending the battery through the post - you have to go through hoops to return it (see other reviews). So I shall keep it until the battery expires in case it deigns to work again but then I shall happily dispose of this waste of floor space.

Update 19 June 2018: Last night (18 June) we had two short power glitches - both times the UPS failed to supply charge and my PC went down. I've attached photos showing that the last time the UPS intervened was 12 June and my Win 7 logs showing unexpected shutdowns on 18 June.

Alec
4.0 out of 5 stars Not great for audio pops
Reviewed in the United Kingdom on January 11, 2015
Verified Purchase
I hate reviews that are like "5*s, it is what it says it is", there's a joke about this, a Tornado warning app has loads of 5* reviews saying "The interface is great, this is a great app" and one guy puts 1 star "It didn't warn me about the tornado". It skews the rating.

So I write this hoping to give a useful review.

There's a standard protocol for UPSs that should make them plug-and-play, this device is MOSTLY compliant. It will tell you time to empty (and this changes even when powered, so you can see how long you would have if there was a power cut) but although it can report watts being used and all kinds of other things it does not over the standard protocol which does support it. You have to use their proprietary software.

To plug it into a computer to get this information you simply need to connect the packed cable that is USB on one end and what looks like a DLS modem connector on the other into the UPS, and you get the above functionality. Your computer will be able to see a UPS and query time to empty, as I mentioned the other statistics (such as load, capacity, battery health) are not supported by this device over the standard protocol, which is disappointing. It gives you time-till-empty though so it's okay.

I got this to stop audio pops every time my fridge turns on, it has helped (surge protectors did not) but there are still (much smaller) pops. Screens sometimes flicker ever so slightly when the device switches over but importantly computers do not.

UPSs are not designed to give long-lasting power, even under small load this is because they usually (unless you have a massive one the size of a room, that has a massive flywheel then) have 12v batteries inside them. This means to draw even 1 amp (at UK 220) means drawing 20 amps from the battery, which is a large load!

It'll power a charging laptop for 15-20 minutes, not the claimed unit measured in hours, it'll power the much larger load of 2 big screens, and a computer + a lamp and some external drives for 9-12 minutes depending on what I'm doing. So you see what I mean by "In theory, 2 hours, but in practice not" bit.

I have not used any of the other features of this device, it works, it is a good UPS for what it is.

I forget the name of the type but this DOES NOT use the input to charge the battery and draw from the battery (2 stage UPS?) it is the cheaper "when the power goes off it kicks in" which is why you get the audio pop, or screen flicker when it switches. This is certainly good enough for most things.

To test if it fits your needs simply flick the plug socket off while it is in use if everything carries on working then it's suitable for your needs.
Read more
102 people found this helpful
Report abuse

Kelv1n
1.0 out of 5 stars Look elsewhere...
Reviewed in the United Kingdom on December 31, 2019
Verified Purchase
As an IT Manager, I consider myself a bit of an old-hand and well acquainted with APC kit, usually its robust and just works. I have 2 of their rack-mounted UPS's in my garage (where I run my home-lab). So this was an obvious choice to go for to use in my home office - But in hindsight, its a useless piece of crap!

Lets start with the battery, the battery connector cables far too short. its practically impossible to connect them, when you do get them connected, you realise the clips are too open and won't make contact... Finally just when you are good to go and plug everything in - When you switch the dam thing on, it has this incessant buzzing noise.

After 30 minutes, I've already got it boxed back up and ready to return!
Read more
15 people found this helpful
Report abuse

Rating revised from 4 stars to 2 stars. Unit failed just out of warranty period, and manufacturer Schneider confirmed it would be beyond economic repair after carrying out a suggested factory reset did not clear the fault. When it worked, it was good, but that's precisely why one should not have to worry about reliability in a device of this kind. Disappointed to have to reduce the overall rating because of this.

Chose this when my previous (Belkin) UPS expired, because it had the option of replaceable batteries.

My requirements were light, that it should power the computer and monitor long enough to give time for a graceful shutdown, and to cope with periodic short outages. Some household appliances periodically trip the RCD protection circuits at the mains box, taking out the whole ring and calling for a mains reset. Annoying, and unfixable. The UPS handles this with ease., keeping the system going until power is restored.

During a couple of public supply outages, the APC kicked in and allowed me time to shut down the system gracefully and without data loss.

The battery-backed outlets don't supply enough juice to drive my laser printer, so that has to go on the surge protection only outlets.

The sealed lead acid battery supplied with the original UPS lasted for seven years of constant use. I have now replaced it with a new one, which was incredibly easy to fit, and everything is back running normally and securely.
Read more
8 people found this helpful
Report abuse

Alan
5.0 out of 5 stars Great Product
Reviewed in the United Kingdom on December 11, 2015
Verified Purchase
Before buying this we had an unexpected power cut, and though we didn't suffer any computer damage I realised how serious it could have been, so this was my chosen solution. It arrived quickly, was well packed, and the battery was in situ but safely disconnected for transit. It was easy to re-connect the battery for first time use. The unit is larger and heavier than expected, but there were no problems locating it under the desk and wall mounting it, although I would have perhaps liked to see stronger hanging points. It's quiet, I can feel a very faint 50 Hz hum if I touch the case, but can't hear anything as there is apparently no need for a fan. It runs nice and cool, and the shape lends itself to fitting in a corner location. Of the eight sockets, four are UPS sockets, I've tested them a couple of times, and everything works just as it should. I don't need the USB link (included in the box), but a quick check confirmed that it worked ok with the iMac. I can't comment on the power saver function available on the non-UPS sockets as I can't actually use it because the non-critical equipment has to be powered down properly rather than just having the mains cut off. So that function is not enabled. The unit uses a series of beeps to notify the user of its status. The beeps are loud enough to hear but they are not intrusive. Note that how long the UPS keeps going in a power cut depends on what is plugged in and what current is being drawn. Overall I'm very satisfied and planning to buy a second unit for use in another part of the house.
Read more