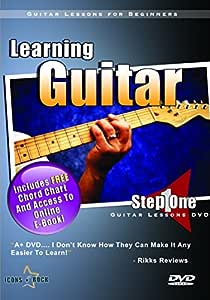 Best LEARN TO PLAY THE GUITAR FOR BEGINNERS, Perfect Video Lessons to learn Guitar Tuning, Chords, Scales and Exercises For The Absolute Beginner

Learning To Play The Guitar Is Now Easier Than Ever Before! - Perfect Guitar Lessons For Beginners - No Previous Experience Necessary!

This learning guitar dvd course has a chapter mark at each lesson, so you can learn and practice at your own pace!

Do you find yourself too busy during the day to commit to scheduled private beginner guitar lessons for you or your family?


Instructor Patrick McCormick teaches you the basics of learning the guitar in an easy-to-follow manner, using step-by-step techniques that break down each exercise into clear and concise segments. Patrick takes you through each lesson, telling and showing you exactly how each lesson is done. Using the easy-to-navigate DVD menu, your control of the guitar fretboard will rapidly become second nature!

"A+ DVD...I don't know how they can make it any easier to learn!" --Rikks Reviews

4.0 out of 5 stars
4 out of 5
48 customer ratings
How does Amazon calculate star ratings?
Amazon calculates a product’s star ratings based on a machine learned model instead of a raw data average. The model takes into account factors including the age of a rating, whether the ratings are from verified purchasers, and factors that establish reviewer trustworthiness.
Top Reviews

Lena Marshall
5.0 out of 5 stars Perfect for beginners
Reviewed in the United States on March 10, 2018
Verified Purchase
I bought this as a gift for my kid who is learning to play guitar, it is easy enough to follow for a child.
Read more
2 people found this helpful
Helpful
Comment Report abuse

Thomas G. Sopchak
3.0 out of 5 stars Better than nothing, good basic value
Reviewed in the United States on October 2, 2006
Verified Purchase
I have been learning guitar for 18 months now. I have taken 17 weeks of live lessons and have about 4 DVD videos including this one. The DVD is ok but slow and boaring. The DVD starts out with learning the basic cords. I can't imagine anyone getting through this. They assume you are going to practice strumming these cords for a few weeks before going on . . . hello? I would suggest learning a few of the cords, like G, C and D7. Then they show you a strumming exercise (after the last cord) to practice, that at least sounds like something. I would do that. They also don't show you any songs which really bites. There are many simple rock classics that most people will know that you can play with a knowledge of very few cords, Yellow Submarine, House of the Rising Sun, etc . . .

After that point this video gets better than most . . they take you through 2 of the pentatonic scales which is huge and very helpful. Then they show you how to use these in conjunction with the strumming exercise. They get high points for this . . nicely done. One thing that would help greatly here is tabs for the pentatonic riffs.

They also present some music theory in that they cover the 1,4,5, cord progressions. Another very nice thing.

Anyway they cover a lot of ground but my biggest issue with this video is the lack of playing any songs early on to help you learn cord changes. One other big draw back is the lack of a split screen to sho you the strumming he is doing. He does a couple of nifty little strumming things that you really can't see what it is he is doing. They should have a split screen for this.

They do show you a little of a lot of things that should be a pretty good intro.

I bought this video when I first started to learn to play and I could not use it much. After about 12 months of practice and learning and some live guitar lessons this video is now more helpful than when I started.

I do recommend buying it because the cost of this video relative to lessons is NOTHING. You get several lessons that you can watch again and again. You can't beat that value.

Kitnkabootal
5.0 out of 5 stars Nothing
Reviewed in the United States on June 3, 2019
Verified Purchase
It was okay
Read more
Helpful
Comment Report abuse
See all reviews from the United States

RCACC
1.0 out of 5 stars Keep Looking
Reviewed in Canada on October 7, 2016
Verified Purchase
Boring instructor. Says it starts from the very beginning - it doesn't. It skips all of the basics that an absolute new player needs to know.
Read more
One person found this helpful
Helpful
Sending feedback...
Thank you for your feedback.
Sorry, we failed to record your vote. Please try again
Report abuse

Page 1 of 1 Start overPage 1 of 1
This shopping feature will continue to load items when the Enter key is pressed. In order to navigate out of this carousel please use your heading shortcut key to navigate to the next or previous heading.
Back
Next
Pages with related products. See and discover other items: learning guitar, perfect musical gift, Perfect Musical Gifts