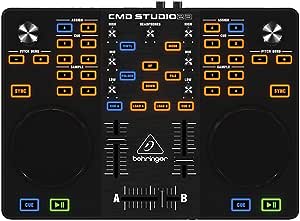 Visit the Behringer Store
3.8 out of 5 stars 29 ratings
| 11 answered questions
Currently unavailable.
We don't know when or if this item will be back in stock.

Negative459Top Contributor: Photography
5.0 out of 5 stars Works great with Traktor Scratch Pro! Setup help in my review!
Reviewed in the United States on October 4, 2016
Verified Purchase
A bit of background. I've been DJing clubs and raves for almost 20 years and recently bit the bullet and got into Traktor. I got this as a controller for Traktor Scratch Pro on my laptop. I don't plan on ever using the free software that came with it. I looked at about a million other controllers but they were all either way bigger than I wanted to carry around for gigs or 2-10 times more expensive. I wanted something small and self powered with a built in audio interface and this ticked all the boxes and was very affordable. Someday I may invest in something more serious but I have a Pioneer mixer, 1200s, CDJs and full Traktor Audio 6 setup in my studio with vinyl and CD control so I don't need or want a big controller there either. I use other controllers for FX, etc. so I didn't need a bunch of extra knobs and pads making the controller bigger. Your mileage may vary.

Build: I'm pretty impressed. Yeah it's all plastic but it has a solid feel for what it is. It's even smaller than I expected, which isn't bad. The controls are all useful unless you have giant hands maybe. The jog wheels are smooth and have touch sensitive scratch on the tops and push/pull rotation on the sides. All of the buttons and sliders have solid feel and good response and the knobs have good resistance. The only thing I really wish it has was gain knobs but it's not a deal breaker since most competitors also don't have them either. Volume on the headphones out is very good, more than adequate for loud venues. Both my Audio Technica ATH-M50s and Sony V6s are plenty loud and clear at 1/2 volume. Master output is clean as well.

Setup: To get it working with Traktor I downloaded the .tsi file from Behringer's download section on the CMD 2A product page and followed the .pdf instructions. They were a bit out of date, though and didn't address audio routing so I'll help you out here. When you import the file you need to go to controller manager > add > import tsi > import other. Once you do that go to Audio Setup and select Audio Device > Speakers (Studio 2A). Do that under Built-In Soundcard as well. Then go to output routing and select Out 2 and Out 3 under Output monitor or you'll get no sound from the headphone jack. Output Master should be set to Out 0 and Out 1. You should be all set from there.

Controls: With the default Traktor mapping all of the controls work with the exception of the file and folder buttons which are unassigned to anything. Otherwise, starting at the top, the pitch knobs adjust/set pitch in .1% increments and the pitch bend +/- nudge the tracks in the same way the edge on the jog wheels do. The Assign buttons are tied to the crossfader so you can reverse the fader for scratching preferences or disable one side of it, or both if you're a channel fader mixer. The Cue buttons set and jump to cue points in your tracks for on the fly juggling, although they're a bit small to get too crazy with. The Sample buttons are set up to start loops and jump between 2, 4 8 and 16 bar loops. In the middle, the Vinyl button activates the touch-sensitive scratch on the top of the jog wheels. Even when it's on the sides still just nudge, which is nice. The mode button shrinks/expands the file browser at the bottom. The Cue A and Cue B buttons mute/engage those channels in your headphones. Load A and Load B load your songs into the decks after you scroll to them with the up and down buttons. The rest are all what you'd expect. Everything is very responsive for me, with little latency.

I'm using it with a pair of Akai Pro LPD8s (Another fantastic bargain controller) for all the extra knobs and pads that the 2A doesn't have. I will probably remap the Pitch +/-, Sample, Load, Assign, File and Folder buttons for other purposes since I have mapped far better controls for loops, FX, filters, etc through the Akais. Hopefully I can use them to trigger remix clips in the C and D decks even though it's only technically a two deck controller. I'll report back if I can get that to work.

Update 10/5/16: I was able to map the sample buttons to trigger and stop remix slots in C and D, so technically this can be a 4 deck controller, albeit with some serious limitations.

Joro
5.0 out of 5 stars Amazing!!! (with caveats)
Reviewed in the United States on November 3, 2017
Verified Purchase
This is a five-star mixer in terms of value for the money. Cheap, small, light, fairly sturdy, great sound, all-in-one solution for laptop(or in my case Surface Pro)-based DJs.
IMPORTANT NOTE: I see this as most useful for two categories of DJs:
1) Complete novice and amateur/hobby DJ who doesn't want to spend a lot and doesn't want to deal with complicated setups etc. or
2) Very advanced DJ who doesn't mind getting into the software (VirtualDJ) to remap the controller to their liking.
If you don't fall in these categories, chances are you may find something much better for you out there - this controller doesn't have basic functions like master volume, channel gain or master/cue headphone mix control in the default mapping.
Read more
One person found this helpful
Helpful
Comment Report abuse

Lovell
4.0 out of 5 stars Review
Reviewed in the United States on February 25, 2020
Verified Purchase
Not for beginners
Read more
Helpful
Comment Report abuse

DJ
5.0 out of 5 stars Behringer made a believer out of me.
Reviewed in the United States on August 21, 2015
Verified Purchase
I searched for 3 years for an affordable (many other products are quite a bit more expensive for the same capabilities) DJ control station to accompany my Native-Instruments Traktor Pro software. Behringer has hit the mark with this controller. The interfacing software works marvelously. I still haven't mastered it,but the buttons and capabilities are pretty straight forward. It took me a little while to get the audio outputs right in order to preview the track on the deck that is not currently playing. Eventually I figured it out and I don't think it was a deficiency with Traktor or Behringer's controller, I attribute it to my own inexperience with a DJ controller. I'm loving it and recommend it for intermediate DJs. Professional DJs and producers may prefer the higher end controllers offered by Native-Instruments.
Read more
4 people found this helpful
Helpful
Comment Report abuse

colem
5.0 out of 5 stars Good stuff
Reviewed in the United States on May 15, 2017
Verified Purchase
I really like this thing. I'm not super serious about DJing but I've been messing around with it and enjoying myself for a while. I used to have a Numark Mixtrack Pro which is another entry level controller. This this is a bit smaller but feels and looks much better than the options from Numark. Very good price point as well. Recommended!
Read more
One person found this helpful
Helpful
Comment Report abuse

Nickolas Gilbert
4.0 out of 5 stars Worth the price
Reviewed in the United States on February 10, 2018
Verified Purchase
Purchased this used and I am happy with the buy. Good little beginner controller.
Read more
Helpful
Comment Report abuse
See all reviews

Simon C.
4.0 out of 5 stars Great little USB controller
Reviewed in the United Kingdom on January 16, 2018
Verified Purchase
Great little USB controller.
Pro's
Well built, solid but not heavy, with a good feel to the all the controls.
Easy to set up with Windows 10, all I had to do was connect the cable to my PC and open the program and there it was (the audio device switched automatically when connected).
I plug my headphones in to it so I can monitor the audio, and it has L+R Phono outputs to go straight into my amplifier.
Easy to add custom controls with the software I use.
Con's
There is no gain for either channel as a separate dial, can be done with a mouse, or you could reassign the tempo dial (not 100%) positive as haven't tried)
It only worked for 30 days with the software I choose to use (VirtualDJ). Now to some people this won't be a problem, as it comes with a voucher for DeckaDance2 LE software - but it still isn't a full license, and will require another purchase to get the most out of this product.
The jog wheels aren't exactly great, or it could just be me, luckily I don't need to use them much.

Overall, this is a good product which has really simplified what I want to do with the software I use. It isn't a professional level piece of equipment, more for a bedroom DJ or someone with limited space who wants to get started without a massive outlay. I say massive as I did have to spend a similar amount again to purchase a license for the software I want to use.
Read more
One person found this helpful
Report abuse

Emilio Persa
1.0 out of 5 stars Problema
Reviewed in the United Kingdom on August 8, 2018
Verified Purchase
I think the software is out of date and I do not have a player
Read more
Report abuse