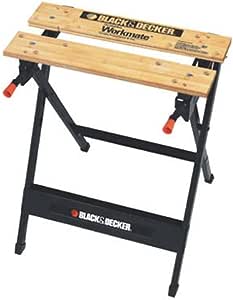 Buy this product as Renewed and save $3.87 off the current New price.

Black & Decker WM125 Workmate 125 350 Pound Capacity Portable Work Bench is a necessity for the serious craftsman. Weighing only 15 pounds, this heavy-duty workbench holds up to 350 pounds to accommodate a wide variety of projects. Dual clamp cranks and four swivel pegs can be angled for unique jobs when clamping a variety of materials. Jaws resist swelling and warping over time. Non-skid feet prevent sliding while you work. The bench folds flat for compact storage.

The Workmate 125 holds a robust 350-pounds on its work surface. Open and close the Workmate with the dual clamp cranks which offer increased clamping force and versatility. The rubber non-skid-feet prevent the unit from sliding around as you do your projects. At only 15-pounds, you will get portability without increased fatigue. Folds flat for easy storage. The workmate 125 includes four swivel pegs for added versatility and reliability in clamping different materials.

4.3 out of 5 stars
4.3 out of 5
2,139 customer ratings
How does Amazon calculate star ratings?
Amazon calculates a product’s star ratings based on a machine learned model instead of a raw data average. The model takes into account factors including the age of a rating, whether the ratings are from verified purchasers, and factors that establish reviewer trustworthiness.

Drifterdino
5.0 out of 5 stars Good form and function for 29 bucks..
Reviewed in the United States on June 4, 2016
Style: Portable WorkbenchVerified Purchase
Pros:
- inexpensive and ships fast.
- quick assembly (23 minutes for me).
- functional and works as advertised.
- folds easily for transport to job-site and to stow in a work van.
- decent quality design and materials for the cost.

Cons:
- all the whiners who write speeches about how "difficult" this is to assemble and the Chinese workmanship and lacking instructions. It's a BENCH! It comes with 8 nuts and bolts and four lag bolts with some plastic spacers, worm gears and feet - done. These scathing reviews make me wonder about our American intellect and skill with simple tasks such as assembling a BENCH. This is a $29 folding bench that works as advertised. Perhaps we need to spend more time with basic reasoning skills and less time writing reviews. If you received missing parts or defective hardware (which I did not) that's one thing - but it sounds to me like the problem is a simple lacking in ability to put a puzzle together. This workmate is WELL worth $29. Suck it up America.

GuitarGuy1228
5.0 out of 5 stars 5 Stars IF you are aware of their assembly video
Reviewed in the United States on May 12, 2016
Style: Portable WorkbenchVerified Purchase
There is a video from Black and Decker which shows you how to install the bench, link is below:

EDIT: Amazon wouldn't let me post the link, but if you search Youtube for "Black and Decker workmate 125 assembly" you will find it.

As lots of other people pointed out, the installation instructions are terrible, which is the main downside to this product. But if you watch the video (and pause it at key points to look at the workmate in various stages of assembly) you shouldn't have a problem.

A few other important things to note:

- Don't use the stupid cotter pins to hammer in the handles! Its really hard to get them in properly and you risk hurting yourself or bending the handle out of shape with the hammer. As another reviewer pointed out, use #6-32 1 & 1/4 nuts and bolts instead. Buy a pack of 6 ( 99 cents from home depot), you will need the other 4 to resolve the next issue....

- The rubber feet will fall off constantly, which is annoying. To fix that you can drill holes through the feet and legs so that you can install nuts and bolts to hold them on (see picture). Drilling a 9/64 hole will be enough to make the #6-32 bolts fit in.

I know.... it would have been nice if Black & Decker just manufactured the thing this way, and just provided you with the $0.99 pack of bolts. But even with these shortcomings, it still deserves 5 stars when you factor in extremely low price tag ($29), and more importantly, the fact that once it is assembled properly, its a solid product. More versatile and useful than many other things which cost much more.
Read more

I bought two, made these two changes and love them. I put a sliding miter saw on one, opened the clamp until it firmly pushed into the legs of the saw and now they are like one unit. If that had not worked, I would have mounted saw to plywood with a 2x4 attached and just clamped down on the 2x4. Saved $100 over buying the specific stand for my saw and this one even folds up (yes the saw stays connected and folds down with the top). The second will be for jig saw and other table top work. Total cost: ~$50 with the current B&D $10 discount.
Read more
124 people found this helpful
Helpful
Comment Report abuse

Carmon
5.0 out of 5 stars Easy Does It
Reviewed in Canada on August 23, 2017
Style: Portable WorkbenchVerified Purchase
Years ago I had two Workmates, but tomorrows are not always richer, and along the way they disappeared. Watching my money now, I recently purchased a different nonWorkmate bench from a big-box store. That bench was a disappointment. It was rated at 200 pounds but was made of terribly flimsy steel. It cost me about the same ($60-ish) as this B&D 125 model, and I am SO GLAD I took the other one back to the store for a refund. This new B&D 125 is a very nice compromise between "kitchen-useable" and good strong steel. I live in an apartment. You get the idea. DETAILS for CONSTRUCTION:

(with apologies to Amazon for my too-many edits)

I was being cautious, and I took my time putting this together. Easy does it; DO take your time. Here are Watch-Out-Fors. Letters such as (F) relate to B&D letters in the B&D instruction manuals.

1. Good instructions from B&D come with your workbench, plus B&D has a nice video plus there is a PDF, virtually word-for-word the same. I had both the PDF and the video on my computer as I assembled the workbench.

3. There are two (F) spacers. Identify them right when you begin, because you need them in Step 3, and the instructions mention them just once and glide on by. Don't see them as "left-overs" at the end. (If you do, no big deal; you can still put them in.)

4. Assemble this workbench gently. You can tighten everything later on.

5. There is a caution about the two (E) locking knobs. GO EASY ON THESE, during assembly and use. They are only plastic.

6. Steps 6 and 7 require three hands, or else, if you have hands like my wife says are suspiciously good at unfastening bra straps single-handedly, then you can do these steps rather enjoyably. Be in a good mood. They don't call us handymen for nothing.

7. NOTE: Still dealing with Steps 6 and 7, the four (B) self-threading hex head bolts will be ever so happy you were ready with your 13mm socket ratchet. The plastic included part (U) nut driver is fairly good for its being plastic, but here you really want steel.

8. Step 9 wants you to use a hammer twice, to force a roll pin into each of two plastic parts. WHOA!! I would not go gentle into that good night; meaning, I WOULD NOT WHACK AWAY WITH A HAMMER at a delicate unbraced plastic part mostly in mid-air. So, STOP your assembly here, and carefully lie your almost-finished Workmate down on the kitchen floor or wherever. Find a small end of 2x2 or 2x4 and snug it under the handle so the plastic part can take the hammer blows. Be sure to manually pull the screw assembly (N) as far out away from the parts you could damage. (You'll understand when you do this.) Use a nail to rotate the same (N) piece so the tiny hole points straight up. Now use a scrap of hardwood or any kind of steel thing to give you a few inches of HEIGHT, and then try your hammer blows. Guess what: it works!

You want to think ahead, and do all this with patience. Naturally: you're a carpenter.

The steel on this Workmate is WAY stronger than the silly steel on the item I returned to the store, by the way. And the 350-pound limit shows in print right on the Workmate 125's surface, so I think it really is capable. Take a few more suggestions from another video online, especially one by Marty about his "tricked out" Workmate 400 (a bigger version) with his additions such as his home-built Bench Bull.
Read more
9 people found this helpful
Helpful
Sending feedback...
Thank you for your feedback.
Sorry, we failed to record your vote. Please try again
Report abuse

Sumonto Choudhury
5.0 out of 5 stars Good deal
Reviewed in India on July 13, 2017
Style: Portable WorkbenchVerified Purchase
I can finally stop using my study table for DIY's around the house... my wife is thrilled! The best thing is the folding and stacking it flat against the wall. Easy assembly, all parts, nuts and bolts included with lucid directions. The vise is a great idea! You'll need some clamps and you are ready to hammer and saw! Good deal.
Read more
3 people found this helpful
Helpful
Sending feedback...
Thank you for your feedback.
Sorry, we failed to record your vote. Please try again
Report abuse

Sampath
4.0 out of 5 stars good
Reviewed in India on October 1, 2017
Style: Portable WorkbenchVerified Purchase
It is good enough for 6k ( total price including import). Assembling was very easy after seeing youtube video.
Yet to start using it but build quality is good for the price.
Read more
4 people found this helpful
Helpful
Sending feedback...
Thank you for your feedback.
Sorry, we failed to record your vote. Please try again
Report abuse

Page 1 of 1 Start overPage 1 of 1
This shopping feature will continue to load items when the Enter key is pressed. In order to navigate out of this carousel please use your heading shortcut key to navigate to the next or previous heading.
Back
Next
Pages with related products. See and discover other items: cheap cordless drill, clamping tools, workshop table, shop bench, tech tools, network tools