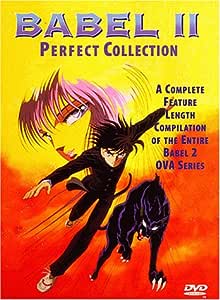 $24.99
& FREE Shipping on eligible orders. Details
Sold by: Amazon.com
Have one to sell?
Sell on Amazon

The complete feature-length compilation of the "Babel II" OVA series. Hidden psychic powers are unleashed in a reluctant hero who is transformed from a mild-mannered student into "Babel II," a supernatural warrior who must battle an army of zombies led by a ruthless Magus. Based on the classic science fiction graphic novel, "Babel II" is a spell-binding journey into the heart of darkness. Contains graphic violence.

Starro
2.0 out of 5 stars Babel 2 without subtitles???
Reviewed in the United States on October 24, 2017
Verified Purchase
My main gripe with this specific product is that its so damn old that its got only a dubbed English track OR a Japanese WITHOUT subtitles track. I don't know why/how import anime could have been brought to the US with an original language track missing subtitles but it was.. Its been mentioned in the other reviews that this might also have been drastically edited..although I haven't seen the original.

Amazon Customer
3.0 out of 5 stars Not your average psychic friends network
Reviewed in the United States on January 20, 2003
Following the manga from Metsuteru Yokoyama(the creator of GIGANTOR)BABEL II is not a sequal to something. The "II" indicates the main character is Babel the 2nd. Koichi is a seemingly normal young man who keeps getting dreams about a tall tower in the desert. It turns out to be the very Tower of Babel from the Bible. He is saught out by Juju, a beautiful pink-haired psychic who tries to recruit him for her group of revolutionary psychics lead by the maniacal Magnus. Koichi decides to use the special powers that awaken in him to help defend humanity from this band of superhuman revolutionaries. With his comrades, the shapechanging panther, a giant robot, and a Rodan clone, he might just win. Adopting the new name of Babel II, Koichi tries to assist a group of authorities with bringing down Magnus' plans for world domination. Many characters from this series were later reused for the GIANT ROBO anime which was an almagamation of several of Yokoyama's titles, where Babel II is actually the secret main bad guy who only appears at the very end of the series. BABEL II-PERFECT COLLECTION has all 4 episodes of the original OVA series as released through Streamline Pictures which is now owned by Image Entertainment. This is not the new series however: BABEL II-BEYOND INFINITY. People sometimes confuse this with the remake. But still the animation is fair and has lots of super action for your generic X-Men fan!
Read more
2 people found this helpful
Helpful
Comment Report abuse

Kindle Customer
4.0 out of 5 stars Dated anime but Awesome story!!
Reviewed in the United States on August 11, 2001
Wow the story behind this was way past kewl. The characters were intruiging. Especially the realtionship between Babel II and the leader of the bad guys. Quite kewl. There were only two things that were off with this anime. First the animation is dated. You can tell that this anime was made a while ago. The images are slightly blurry with stock images being used over and over. Also the way the story went made it seem more of a complete tv series turned into a quick movie. There seemed to be missing time gaps that we never saw. Scenes change at the drop of hat with no explanation. Aside from this the anime was great! I had lots of fun viewing this one though! Reminded me a lot like Mai the Psychic Girl^_^
Read more
Helpful
Comment Report abuse

Chris C.
3.0 out of 5 stars Breath of fresh air?
Reviewed in the United States on May 9, 2000
Most Anime seen in the United States will eventually leave you cold with it's half naked babes and overly innocent teenage male stars but for once that has changed. In this fantasy tale we find the young male hero to still be very much the innocent at first but over time he becomes the wiser then his age superhuman hero that we all know he's going to be. With a plot that sometimes seems to turn back in on itself this particular anime can confuse some newer viewers of Japanese Anime. Then again, with it's odd plot progression and sometimes disconcerting visual images, maybe we could all get a little confused. Either way this isn't a bad movie, just a little out of date.
Read more
Helpful
Comment Report abuse

Beantown857
5.0 out of 5 stars Five Stars
Reviewed in the United States on October 18, 2014
Always wanted to own this movie, now I do.
Read more
Helpful
Comment Report abuse
See all reviews