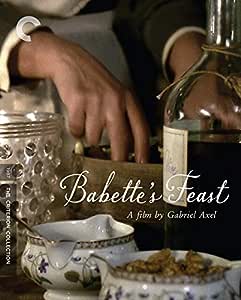 At once a rousing paean to artistic creation, a delicate evocation of divine grace, and the ultimate film about food, the Oscar-winning BABETTE'S FEAST is a deeply beloved cinematic treasure. Directed by Gabriel Axel and adapted from a story by Isak Dinesen, this is the layered tale of a French housekeeper with a mysterious past who brings quiet revolution in the form of one exquisite meal to a circle of starkly pious villagers in late nineteenth-century Denmark. BABETTE'S FEAST combines earthiness and reverence in an indescribably moving depiction of pleasure that goes to your head like fine champagne.

4.6 out of 5 stars
4.6 out of 5
125 global ratings
How are ratings calculated?
To calculate the overall star rating and percentage breakdown by star, we don’t use a simple average. Instead, our system considers things like how recent a review is and if the reviewer bought the item on Amazon. It also analyzes reviews to verify trustworthiness.
Top reviews

Gregg T. Lamm
5.0 out of 5 stars The Tortoise Wins The Race / But Also Gets Eaten
Reviewed in the United States on July 23, 2013
Verified Purchase
In the old story "The Tortoise And The Hare" you probably remember that the tortoise, despite all odds and all expectations, wins the race. "Babette's Feast" is like that story. It's slow (but never boring), it's plodding (but never tedious), it's intentional (but never obvious). Filming a classic Danish short-story about a religious order whose piety stops just short of becoming a cult, centering on the two unmarried daughters of the group's long-deceased founder, whose decades-long compassion is only outdone by their ability to turn bread and fish into an edible stew, and including a mysterious houseguest and then friend, whose secret when revealed will not only stun, but bless, is no doubt easier said than done. But it's all magically pulled off in this beautiful film.

When I first read this short-story by author Karen Blixen-Isak Dinesen in the 1970s I loved it. When I first heard the short-story read aloud on cassette tape by Colleen Dewhurst in the 1980s I loved it. When I first saw the short-story on film in 1987 by director Gabriel Alex I loved it. And now, what a joy it is to see this Academy Award winning film on BluRay Disc, in glorious high definition, and with new and improved subtitles. My VHS tape copy of this film is the only one I couldn't bring myself to pass onto Goodwill through the years -- even though it's been years since I've owned a VCR. But now it can go.

The story begins long ago when the two daughters of the man who founded this religious order (no sign of their mother) were young women -- and then it picks up much later, when the interwoven stories of their faith, their daily lives, and their loves come back full-circle in ways that lead more to gratitude than to regret. Yes it's slow, but to tell this story any other way would be like trying to make a souffle in a Suzy Homemaker Easy Bake Oven. And even though in the old story, the tortoise won the race, in this short-story and film, the tortoise also gets turned into a delicious soup! I guess you can't win them all. Eat some Danish crepes, pour yourself some good, strong, black Danish coffee, and then watch this film! You will be glad you did.

Andy
5.0 out of 5 stars Elegant Danish Fable Is A Feast Indeed!
Reviewed in the United States on May 18, 2018
Verified Purchase
Beautiful Academy Award winning Danish film is, perhaps the greatest showcase of gourmet food in all of cinema. A touching tale of an unexpected guest (the wonderful Audran) in a small Scandinavian community, it's repressed inhabitants and their need for spiritual nourishment. Gently builds it's themes of life choices, art and artistry, generosity and charity, and the sensual and the spiritual, with genuine humor and grace. The title dining scene is truly great -nothing short of magical, exquisitely filmed with a gilded warmth, in contrast to the cold, dreary seaside village. This fine Criterion Collection release is not only brimming with plenty of documentaries and interviews, but author Isak Dinesen's short story is included in the booklet. This classy, witty, and intelligent film is an unforgettable treat for your inner gourmet.
Read more
2 people found this helpful
Helpful
Comment Report abuse

Douglas Coleman
5.0 out of 5 stars A Feast for Movie Lovers!
Reviewed in the United States on April 18, 2013
Verified Purchase
I have been waiting for a quality release of Babette's Feast for several years, and now my wish has been wonderfully granted! With newly restored video and audio, along with a new English subtitle translation, Babette's Feast has finally gotten the attention this wonderful film deserves!

For those who do not know, this is the story of a French housekeeper in a remote Danish village. She works for two sisters who live together, the daughters of the founder of a fundamentalist religious sect. When Babette learns she has won a great deal of money she decides to celebrate with a feast for the members of the sect. This feast provides the setting for the great contrasts the movie explores: asceticism versus indulgence, grace versus law, friendship versus suspicion, mercy versus righteousness. At the wonderful hospitality of Babette's table we experience not only great food but also the way that these contrasts might live in harmony. We experience, in other words, the miracle that men and women might learn to dwell together in peace and love through the simple acts of giving, sacrifice, and the choice to enjoy life.

This is a feast for the eyes as well as the heart. Enjoy the meal!

(Edit and Update)
Having now received and seen the Criterion Bluray, I can say with all excitement that this is exactly what I'd hoped it would be! Babette's Feast shines with the Criterion treatment, with the picture, sound, and extras (including the packaging) everything you might expect from them. This is a quality release of a movie that continues to charm me.
Read more
71 people found this helpful
Helpful
Comment Report abuse
See all reviews

Amazon Customer
5.0 out of 5 stars A classic Oscar winning Danish film that's for the ages. An absolute delight.
Reviewed in Canada on May 24, 2018
Verified Purchase
Just received this yesterday, and haven't gotten around to watching yet. I'm saving for a rainy day to savour it. I remember seeing it all those years ago and was blown away by the beauty and simplicity of it's wonderful story. And if you're a "foodie", this movie is for you. I remember it was the surprise Oscar winner for Foreign Film that year over "Au Revoir Les Enfants" which was a surprise as that's a wonderful film too, but nowhere is there a film as beautiful and touching as this one. Brilliant performances. Elegant if you will. A must see for the ages.
Read more
2 people found this helpful
Report abuse

Tom N
5.0 out of 5 stars Slow cooking at its best!
Reviewed in Canada on January 17, 2018
Verified Purchase
This film is the summit for lovers of cinema, great story telling and the art of real gastronomic pleasure as could only been done by the French.
The film is a slow burn. Hollywood action movie fans save your money, this is not for you.
Read more
Report abuse

Ravenous Reader
5.0 out of 5 stars Deliciously delightful
Reviewed in Canada on January 9, 2014
Verified Purchase
A more unlikely dinner party is impossible to imagine. Babette's Feast touches the heart at every turn and and the main character's extraordinary generosity inspires viewers to consider the role that food and love and other pleasures can play in our lives. Arriving out of nowhere at a small village on the coast of Denmark, Babette is taken in and provided a place to stay and a way to connect and serve the community, which adheres to very strict and severe religious precepts. She humbly accepts lessons in how to prepare plain and frankly disgusting looking dish made of beer and bread and deliver it to the village's poor and sick. The extreme austerity of those living around her and their determination to avoid sensual enjoyments presents a serious challenge to the newcomer whose genuine skill as a top chef becomes clear to us as the film progresses. The performances are strong, the setting is compelling, and the meal -- when it finally comes to the table, will have your mouth watering for the delectable treats set out.
Read more
3 people found this helpful
Report abuse

Second Look
5.0 out of 5 stars '88 Foreign Film Academy Winner Keeps Delivering.
Reviewed in Canada on July 4, 2016
Verified Purchase
A classic on many levels.
Are there any big questions of life left? If the meanings of success, fame, humility and service are still for some the big questions,
then Babette's Feast will always be a treasure for seekers to discover.
Read more
Report abuse

Gael J. Larche
5.0 out of 5 stars Brilliant
Reviewed in Canada on January 15, 2018
Verified Purchase
One of my favourite films in the last two decades. An art film. Not for the impatient viewer but a delight for artists, opera lovers and gourmets. The cuisine sequences are brilliant. Every chef or aspiring chef should see this film.
Read more
Report abuse
See all reviews

Page 1 of 1 Start overPage 1 of 1
This shopping feature will continue to load items when the Enter key is pressed. In order to navigate out of this carousel please use your heading shortcut key to navigate to the next or previous heading.
Back
Next
Pages with related products. See and discover other items: criterion movie, the criterion