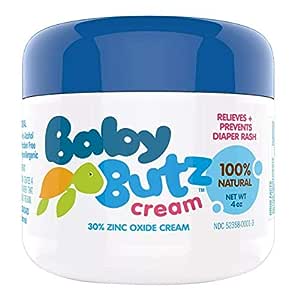 Baby Butz was born out of necessity when Baby Butz founder Majda Ficko's son was born with a rare syndrome, Cornelia de Lange. Cornelia de Lange caused Majda's son to be in diapers 24 hours a day, 7 days a week and suffer from diaper rash on a daily basis. After trying all brands of diaper rash treatments that promised a "cure" only to find most were ineffective and some made the condition worse, Majda took it upon herself to formulate her own natural diaper rash cream for the exclusive use on her son. With the incredible results of this cream in eliminating her child's diaper rash, the doctors who cared for her son suggested she produce it for sale in stores

This is how Baby Butz was born.

4.5 out of 5 stars
4.5 out of 5
153 global ratings
How are ratings calculated?
To calculate the overall star rating and percentage breakdown by star, we don’t use a simple average. Instead, our system considers things like how recent a review is and if the reviewer bought the item on Amazon. It also analyzes reviews to verify trustworthiness.

Teresa T.
5.0 out of 5 stars BEST BABY BUTT CREAM EVER!
Reviewed in the United States on December 7, 2017
Size: 4 OunceVerified Purchase
If I could give this product 5 stars, I totally would! This paste is AMAZING! My daughter is 15 months old and had never suffered from a diaper rash. My husband and I have always been very proactive with the frequent diaper changes, diaper rash cream, and baby powder. A few weeks ago, my daughter started getting a red rash in her private area. It looked like ringworm and when we spoke to her Pediatrician, we were advised to purchase antifungal cream and use that. After a few days of using the antifungal cream, her rash started spreading. At this point, we were both starting to get really concerned. We took her to the doctor’s office and he confirmed it wasn’t a fungal infection. He said it was most likely her skin being sensitive to the diapers and that it was okay and would go away on its own. He even said that she might get it on and off until she’s completely out of diapers. As parents, we could not accept that there was nothing we could do.

After doing lots of digging on Amazon, I came across this Butt Paste. The reviews and photos made me want to try it on my daughter, so I bought it. I HAVE ZERO REGRETS! After just one to two days of applying this cream with every diaper change, her rash DISAPPEARED! Just like that, poof! This cream definitely works the best out of any other cream I’ve used (Balmex, Desitin, A&D). I will definitely be purchasing more and using this on my future children!
Read more
6 people found this helpful
Helpful
Report abuse

StylinMama
5.0 out of 5 stars BEST DIAPER RASH CREAM EVER!!!
Reviewed in the United States on January 20, 2020
Size: 4 OunceVerified Purchase
This is the best diaper rash cream on the market. I’ve been a mother for over 19 years and have battled diaper rash with all of my kids sadly. With all the other brands it’s a very difficult war with ups and downs and moments of sad defeat. I was gifted 2 baby butz jars and put it in my baby care drawer until we had a bad bout of diaper rash with my sensitive skin baby, we had tried everything else we had in our diaper changing kit until I remembered I had this in my baby care drawer. After days of trying to get control of the situation, within 6 hours and 2 diaper changes his diaper area was pretty much back to normal! This stuff is like magic! So I used it any time he got even a little bit red. I recently forgot I had run out and my baby got a bad bout of diaper rash. I ordered some off Amazon and while I waited for it to arrive used other brands I had on hand. I had forgotten how great Baby Butz is compared to the other brands, my poor baby! We finally got it this morning. Again after 3 days dealing with this rash using other creams (and failing to see improvement) it’s finally clearing, I will be more vigilant about keeping this stocked in my diaper changing area. Also I see some people complaining it’s too thick to spread, it is difficult but you have to warm it up and work it a bit between your fingers before spreading it on your poor sensitive baby that’s got raw and red skin. 🙁 It’ll be better within hours, mama you got this! ❤️
Read more
3 people found this helpful
Helpful
Report abuse

Rina Marie
5.0 out of 5 stars My go-to cream!
Reviewed in the United States on November 22, 2019
Size: 4 OunceVerified Purchase
I use this diaper cream at night, when I’m driving long distant, and when I’m shopping. It keeps my babygirl dry and rash free. When she does get a diaper rash while using another product during the day, I put this on and it heals it quickly. Literally cant live without this. Just wish it was bigger for the price, its really thick so a little does go a long way.
Read more
One person found this helpful
Helpful
Report abuse

Jenn
5.0 out of 5 stars Amazing!
Reviewed in the United States on December 9, 2020
Size: 4 OunceVerified Purchase
This stuff is pure magic.
I apply this on whenever my son has a diaper rash and next diaper I change, poof! Gone.
It is very very thick so you have to really scoop it out with your hand but I dont mind it because it stays on and really heals their sensitive areas.
* keep in mind you do have to really clean their bottom during bath with mild soap.

Lori Beth Owens
5.0 out of 5 stars The BEST
Reviewed in the United States on July 2, 2018
Size: 4 OunceVerified Purchase
When nothing else worked on my newborn’s diaper rash, this did the trick in two days, with a huge improvement in just hours. I was amazed and relieved. It is super thick and stays put between diaper changes. I think that’s the reason other similar products don’t work as well. I highly recommend!!! And we haven’t had a rash since. Probably a coincidence, but still!
Read more
One person found this helpful
Helpful
Report abuse

Melissa
5.0 out of 5 stars Best $12. 99 I’ve ever spent on amazon
Reviewed in the United States on March 24, 2018
Size: 4 OunceVerified Purchase
This butt cream is everything!!! Best $12.99 I’ve ever spent on amazon. It works like magic and it’s only 4 ingredients. Not only is this cream amazing but the customer service I received was excellent. My package came damaged from amazon originally and the company sent me two more jars free of charge because of the inconvenience, which was more than I would expect. Will be purchasing more soon! This will definitely be our go to butt cream for now on. One of my twin 9 month olds has very sensitive skin and this is literally the only thing that has helped her.
Read more

5.0 out of 5 stars Best $12. 99 I’ve ever spent on amazon
By Melissa on March 24, 2018
This butt cream is everything!!! Best $12.99 I’ve ever spent on amazon. It works like magic and it’s only 4 ingredients. Not only is this cream amazing but the customer service I received was excellent. My package came damaged from amazon originally and the company sent me two more jars free of charge because of the inconvenience, which was more than I would expect. Will be purchasing more soon! This will definitely be our go to butt cream for now on. One of my twin 9 month olds has very sensitive skin and this is literally the only thing that has helped her.
Images in this review

Abby Ward
1.0 out of 5 stars Wayyy to thick!!!
Reviewed in the United States on December 10, 2019
Size: 4 OunceVerified Purchase
This product is incredibly thick, think like modeling clay thick, or like a clay face mask that has been sitting out opened for a few days. It’s wayyy to thick to spread on and doesn’t want to stay there once on because there’s not enough moisture to it
Read more
Helpful
Report abuse

tara
5.0 out of 5 stars the best diaper cream ever!!!
Reviewed in the United States on June 20, 2015
Size: 4 OunceVerified Purchase
This is the absolute best diaper cream there is. I have tried so many and none really work for both my 1 year old and my 3 year old. I ran out of this so I started using aquaphor and my baby's diaper area broke out in the most horrible red rash, I mean it was everywhere. I had ordered some more of this and it hadn't came in yet. It came in the next day and I put a lot of it on him everywhere the rash was. The next day it was almost gone and the day after completely gone. I order 3 jars of this stuff at a time cause I don't ever want to be without it again. Order this stuff it's AMAZING!
Read more
One person found this helpful
Helpful
Report abuse
See all reviews

JArella
5.0 out of 5 stars Works incredibly well!
Reviewed in Canada on March 13, 2021
Size: 4 OunceVerified Purchase
Honestly this stuff works! Our newborn has bas diaper rash for the first couple weeks and once we tried this it went away. It's worth it.
Read more
Report abuse
See all reviews

Page 1 of 1 Start overPage 1 of 1
Previous page
Next page
Pages with related products. See and discover other items: eczema cream for babies, zinc oxide cream, it cosmetics sales, eczema creams, skin cream for eczema, Best fungal creams for skin
Back to top
Get to Know Us
Make Money with Us
Amazon Payment Products
Let Us Help You
EnglishChoose a language for shopping. United StatesChoose a country/region for shopping.
© 1996-2021, Amazon.com, Inc. or its affiliates