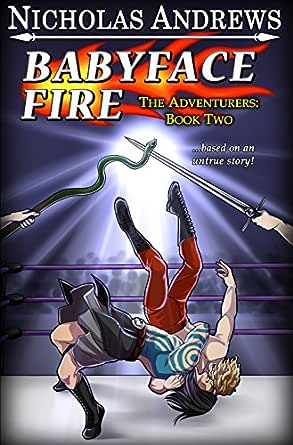 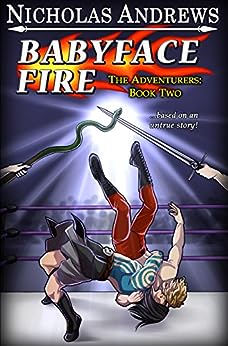 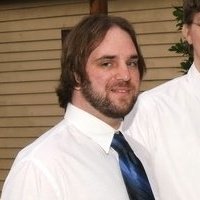 Loebo had to use the ropes to make it back to his feet. His back was in pain from all the falling, his legs were sore from the endless squat thrusts, and now hecould feel his arms starting to go as well. He limped back to the middle of the ring, where Mucus stood with his hands on his hips.

"Come on, you're supposed to be this tough adventurer," he said. "I'm sure you get knocked on your ass a lot. Bumping should be a cinch to you."

"I'm not used to falling on purpose," Loebo said. "Can we take a break?"

"Our two hours are almost up." Bleg rose from his seated position in the opposite corner. "Muke only has three months to whip you into a decent worker, so stop complaining. You're getting paid more than most of these guys will make all year."

Upon the OWW caravan's arrival at the outskirts of Seagrope, the company laborers had wasted no time in setting up camp and posting guards around the perimeter to keep out the curious. While men went into town to promote the weekly spellcast, which would take place the following day at eight bells, other laborers set up one of the rings by a bluff overlooking the sea. The workers used it to train and hone their skills for the shows, but Loebo had been allotted some time to himself each day so Mucus could teach him the basics.

"Again." Bleg had insisted he help Mucus oversee Loebo's training, since he said he felt somewhat responsible for this whole debacle. Ever since, he had been like some kind of overbearing mother hen. A mother hen who could break his back if she sat on him.

Loebo took a breath and stepped to the center of the ring. He squatted slightly, centered his balance, and threw himself backward as Mucus had demonstrated. He hit the mat back first, the air whooshed out of his lungs, and pain exploded in his elbows. Most who had ever seen wrestling thought the mat must be light and springy by the way it bounced on impact.

But Loebo had watched the laborers assemble the ring and now knew the truth. Underneath the outer tarp and a thin layer of padding was nothing but wooden planks, which were fitted tightly together and extended the entire length of the steel ring frame. No wonder it made so much noise with every bump.

"You keep throwing your arms out to absorb the landing," Mucus said. "You need to learn to trust yourself. If your back, butt, and feet all hit the mat at thesame time, the impact will be dispersed and pain minimized."

"Can't we try something else?" Loebo moaned. They had made him warm up with endless laps, squat thrusts and shoulder rolls, and Loebo was exhausted before he ever made contact with the mat. Every part of his body either ached, burned or feltlike it was going to fall off.

"All right, let's move on to striking if you think you're up for it," Mucus said with a twinge of mischief in his tone. He showed him his fist. "Now, when wepunch each other, we open our fist slightly--"

"And touch very light," Loebo said. He had observed wrestling over the years; it didn't take a genius to figure out how some of it worked. "At the same time, you stomp the mat to make a loud sound and the opponent throws his head back pretending to be in pain to make it look real."

"It's called selling," Mucus said, visibly annoyed. "All right, if you're so smart to the business, we'll see what you've got. Get it up, you pussy."

That just sounds dirty. Loebo winced as he climbed to hisfeet, but he wasn't fast enough for Mucus.

"What're you waiting for, a helping hand? GET UP!" Loebo got his bearings, and Mucus stepped up to him. "Give me a forearm."

All right, if that's the way you want to do it. I'm not totally ignorant.

Loebo had seen this done hundreds of times. He grabbed Mucus by the back of his mask and wound up his right arm, raising his foot at the same time. He swung his forearm forward, barely touching his trainer's chin, and gave the mat a firm stomp at the moment of impact. Mucus recoiled and held his face, moaning as if he had been struck with a stout club rather than Loebo's arm flesh.

"What do you think?" Loebo's smirk didn't last long. Mucus grabbed him by the hair and gave him a forearm strike to the chest. However, he didn't stomp his foot. The only noise he heard was the echo of forearm smacking his sternum at full force.

Loebo gasped as the air was knocked out of him once again. Caught off guard by theblow, he staggered back into the turnbuckles. Like a wolf cornering his prey against a rock face, Mucus moved in with him and gave him another forearm to his chest, again with no stomp. Before Loebo could react, Mucus followed up with a backhand chop that stung like a thousand hornets. Wondering what animal would hurt him next, Loebo dropped to his knees, holding his chest and gasping for air.

Mucus crouched down and got in his face. "Worker's first rule-- not all of it is bullshit."

Loebo nodded as he found his wind. "I'd like to try bumping again, please."

Nicholas Andrews grew up in Dayton, Ohio. After graduating fromBellbrook High School in 2000, he went on to attend both Ohio University and Wright State University. He worked as a freelance video editor forvarious independent pro wrestling companies for three years, beforereturning to his first love of writing. He has been writing storiessince he was ten years old. He is also the nephew of Ted Andrews(1952-2009), award winning new age author.

Predator51
5.0 out of 5 stars An adventure like none other!
Reviewed in the United States on June 16, 2014
Verified Purchase
This book is even better than the first one! The reader gets to know more about the characters of the Chosen Squad which was briefly mentioned in book # 1. There's an evil mage, lizard men, and even fake wrestling! A most entertaining book!
Read more
Helpful
Comment Report abuse
See all reviews