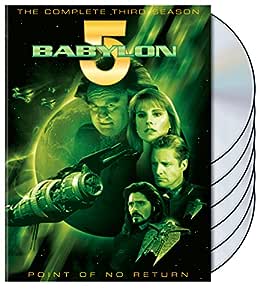 In 2260, Babylon 5's captain declares the station an independent state and forms a war council to battle the evil Shadows--and their allies on Earth.

4.8 out of 5 stars
4.8 out of 5
726 global ratings
How are ratings calculated?
To calculate the overall star rating and percentage breakdown by star, we don’t use a simple average. Instead, our system considers things like how recent a review is and if the reviewer bought the item on Amazon. It also analyzes reviews to verify trustworthiness.

lillirose51
5.0 out of 5 stars we love this series
Reviewed in the United States on February 21, 2020
Verified Purchase
We watched seasons 1 and 2 on Prime, and got caught in the middle of Season 2 when it went off Prime, no way we weren't going to buy it to complete watching. As my husband says he wishes he could live in the Star Trek universe with global peace, eradication of poverty and hunger, etc. but, Babylon 5 is a lot more real. If we ever make it that far, we will still have homeless and lurkers, political shenanigans, and crime, but with people who are working to try to make things better. It's hard to realize that this was written in the 1990's because President Clark nefarious take over with the help of the Shadows seems too eerily like some of what is happening in present day politics.
Read more
5 people found this helpful
Helpful
Report abuse

CilantronTop Contributor: DC Comics
5.0 out of 5 stars One of the best seasons of this (or any) show
Reviewed in the United States on October 8, 2017
Verified Purchase
This review is for the 2003 edition. Based on the other reviews, the 2009 edition is probably better.

Now all the set-up from the previous two seasons pay off. The Shadow War ramps up. Earth becomes more corrupt, beyond Sheridan's ability to tolerate.The Night Watch becomes more of a problem. As G'Kar becomes a more sympathetic character, Londo becomes a moral disaster. Sheridan and Delenn's relationship becomes romantic. The other half of the Babylon 4 story is here. Franklin has to deal with his stim problem. Bester joins the good guys - sort of. New character Marcus, a human Ranger, joins the cast. Zack Allan becomes fleshed out as a character.
Lyta, who returned for one episode in season 2, is in two episodes this season and helps to fight the Shadows (she'll be in a lot more episodes in seasons 4 and 5).
Ends on a cliffhanger - "if you go to Z'Ha'Dum, you will die."

DVD features
Disc 1
Introduction to "Point of no Return" (6:06) Watch after watching the season.
(Discs 2 and 5 - none)
Disc 3
Commentary on "Severed Dreams" - by JMS
Disc 4
Cast commentary on "Interludes and Examinations" - slight spoiler for Morden.
Disc 6
Commentary on "Z'Ha'Dum" by JM Straczynski - Watch seasons 3 and 4 before listening to the commentary -spoilers.
Behind the mask (8:11) On the makeup/prosthetics for the aliens.
Building a better Narn (7:21) We see Marshal Teague get transformed into Ta'Lon.
Designing Tomorrow: The look of Babylon 5 (9:59) On the set design, costumes.
The Universe of Babylon 5: Personnel Files, Shadow Dossier, Data Files (Blooper reel hidden in Data Files). Watch season 3 before looking at these - spoilers.

Grandma Geek
5.0 out of 5 stars Every season of Babylon 5 - plus more!
Reviewed in the United States on September 13, 2020
Verified Purchase
When Babylon 5 first came out I was still working, catching up on Laundry or getting tomorrow's dinner started, etc, when everyone else was watching the show was on the TV set. And I am the SciFi nut in our household !!! This was a chance of a lifetime, I have now seen all of the 5 season's and with research on the internet I have read all of the back-ground info, the struggles of J. Michael Straczynski to get everything needed to get his Dream on the air, assembling all those fantastic sets, the problems with the complex make-up and costumes, and all of the extra programs and films. It was great! If you like SCFi stories &/or movies you will love doing this.
Read more
Helpful
Report abuse

David A. Smith
5.0 out of 5 stars Too many people I know said the show was good. So
Reviewed in the United States on October 20, 2016
Verified Purchase
I never watched this when it was on TV, I saw the first couple episode and "bagged it" - a couple of the characters were "too eccentric" for me, Kosh's costume makes sense only to the costumer, and the special effects were too cheap/obvious. That being said, now, with wiser eyes, I keep in mind that the special effect in the 90s just were not up to today's standards and TV shows often don't have the budgets that movies have.

Too many people I know said the show was good. So, I finally watched it - all of it. The technical aspects of the production/delivery are adequate and, I forgave the costumer, more or less). And I am actually fond of all the characters.

The story line is great. An example of what a good writer can do, if the network execs don't meddle too much. The sequel series only made it one season - I never understood what network execs can't be happy with a good show that is popular, but not wildly popular.
Read more
3 people found this helpful
Helpful
Report abuse

Voracious Procrastinator
5.0 out of 5 stars Intricately plotted cult TV series now over 20 years old, but still great
Reviewed in the United States on March 12, 2017
Verified Purchase
I'm binge-watching Babylon 5 all the way through, more than twenty years after it was first broadcast, and I only owned Seasons 1,2, and 4 on DVD, so Amazon On-Demand to the rescue.

This extraordinarily intricately plotted space opera finally hits its stride with Season 3 after the elaborate set up of the first two seasons. I was pleased by Amazon On Demand's price. SD isn't a problem on my 32" screen, but remember, this was broadcast in the mid-90s. My only complaint, which probably has nothing to do with the streaming version is that the dialog is very quiet sometimes in comparison with the battle scenes and the scenes set to music. This requires hands-on volume control in order not to wake others at night - I suggest surround sound headphones to get the most out of the soundtrack.
Read more
3 people found this helpful
Helpful
Report abuse

Clifton M. Duncan
5.0 out of 5 stars Best you have ever see Babylon 5 & I would so totally buy these on Blu-ray.
Reviewed in the United States on November 22, 2020
Verified Purchase
Just bought Season 3 on Amazon and took a look see on my 55" 4K TV. The Babylon 5 online community is a blaze with the news of remastered seasons. It is not totally without the token digital artifact here and there (which I feel like is actually being caused by internet buffering,) Let's just say it is as beautiful as you have ever seen Babylon 5 look, given how poorly most TVs looked when the VHS tapes came out or you saw it on broadcast and then how poorly the Widescreen DVD sets look. I would so totally buy these on Blu-ray or DVD yet another time.
Read more
Helpful
Report abuse
See all reviews

trelissa
4.0 out of 5 stars enjoyed
Reviewed in the United Kingdom on September 29, 2011
Verified Purchase
I anm a fan of babylon five and have the first two seasons so this was a natural purchase, I have enjoyed season three.
Read more
Report abuse

C.S Lee
4.0 out of 5 stars ... where the Shadow War affects the whole Galaxy...
Reviewed in Canada on April 14, 2004
Verified Purchase
The 3rd season by far is the best season ever to achieve an epic sci-fi television series that brings a whole new perspective of what it means to create a good science fiction epic tale that doesn't require special effects, only the script and characters that will bring viewers to the screen.
A war exploded right to the face of the galaxy and its up to Sheridan and Delenn to stop this war with the help of others, G'Kar's downfall happens here with the uprising of Landou. Out of 5 seasons, this is the best of the best and enjoyable in its own way. It will leave you with a cliffhangar that you can't refuse to go for Season 4...
An achievement in television series like no other...
Read more
Report abuse

Wayne
4.0 out of 5 stars Great sci-fi series
Reviewed in Canada on August 14, 2013
Verified Purchase
Been a fan of Babylon 5 and was a big fan of the Shadow storyline that was delved into very deeply in season three. Overall if you are a fan of B5 you will enjoy this. Only downside I found is that on a 720p Plasma TV the image seems a little grainy, and I am not sure if they had tried to clean up the video for HD TV's or not. Still very enjoyable and at less then $12 for the boxset it was a great deal.
Read more
Report abuse

T. Pavey
4.0 out of 5 stars Best Sci-Fi series...poor DVD quality
Reviewed in Canada on September 23, 2003
Verified Purchase
This series has the same quality issues that the first two had, but there are fewer of the bad scenes. Also, the bad scenes seem better than the bad scenes in the previous two series.
I stated this for season two and I will again here. I think what happened is the scenese that are bad were not in widescreen format so they enlarged the image and chopped off the top and bottom. Watching it, I notice that in a large number of the scenes that look blurry, peoples chins and hair are cut off. Personally I would rather have the image shift from widescreen to 4:3 repeatedly than have this poor video quality. Unfortunately I do not think that they will rerelease these with good quality masters any time soon, so I am stuck buying them this way.
Read more
Report abuse
See all reviews