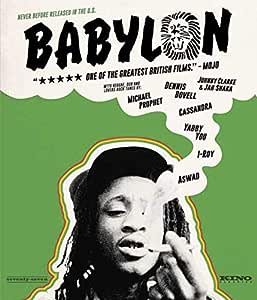 Karl Howman (Actor), Franco Rosso (Director) Rated:
NR
Format: Blu-ray
4.5 out of 5 stars 123 ratings
Available at a lower price from other sellers that may not offer free Prime shipping.

Franco Rosso’s incendiary Babylon had its world premiere at Cannes in 1980 but went unreleased in the U.S. for “being too controversial, and likely to incite racial tension” (Vivien Goldman, Time Out). Raw and smoldering, it follows a young reggae DJ (Brinsley Forde, frontman of landmark British group Aswad) in Thatcher-era Brixton as he pursues his musical ambitions, battling fiercely against the racism and xenophobia of employers, neighbors, police, and the National Front. Written by Martin Stellman (Quadrophenia) and shot by two-time Oscar® winner Chris Menges (The Killing Fields), Babylon is fearless and unsentimental, and set to a blistering reggae, dub, and lovers rock soundtrack featuring Aswad, Johnny Clarke, and more, anchored by legendary producer Dennis Bovell’s (The Slits) atmospheric score.

4.5 out of 5 stars
4.5 out of 5
123 customer ratings
How does Amazon calculate star ratings?
Amazon calculates a product’s star ratings based on a machine learned model instead of a raw data average. The model takes into account factors including the age of a rating, whether the ratings are from verified purchasers, and factors that establish reviewer trustworthiness.
Top Reviews

rayalen
4.0 out of 5 stars Jamaican Patios In Living English
Reviewed in the United States on November 8, 2019
Verified Purchase
This beautifully restored film depicts young men dealing with lack of opportunities for improvement, economic deprivation, differences in ideology from parents, police harassment. police brutality and racism in 1970's/1980's England. A mirror reflection of what young men were facing in the U.S. during the same time period. Sadly though young men are still having to deal with the same issues in the year 2019 of this first time U.S. release. The movie is in English and Jamaican Patios with optional newly transcribed English subtitles with a Reggae music soundtrack. A twelve page color booklet with background information about the film and several bonus features ( of particular interest "Dread Beat And Blood (1979 A Short Documentary On Linton Kwesi Johnson)" are also included.
Read more
Helpful
Comment Report abuse

John Cousin
5.0 out of 5 stars Finally Available in the U.S.!!
Reviewed in the United States on September 27, 2019
Verified Purchase
I was fortunate to see this film via an uploaded bootleg on YouTube. I tried to buy the DVD a while back, but it was only available in region 2 format. The digital restoration of the film and soundtrack is superb! It's a shame that this film got little or no attention outside of the UK. An enjoyable film for all. Well worth the wait.
Read more
One person found this helpful
Helpful
Comment Report abuse

T. O&#39;Neil
3.0 out of 5 stars ... a direct to digital transfer video quality from a pretty rough looking tape
Reviewed in the United States on July 9, 2014
Verified Purchase
This edition has the look of a direct to digital transfer from a pretty rough looking tape. Incidentally I have found this to be true of other releases from Raro Video. There is another version floating around, also Region 2 but a UK edition,which includes a couple of shots that were inexplicably cut from the Raro version (e.g a punchline to a joke. perplexing why they would cut some thing like that).

Still a great film, very realistic depiction of Black youth's struggles in Brixton just prior to the riot of 1981 that led to the repeal of 'sus law' i.e. racial profiling, similar to 'stop and frisk' in the US. I think the plot is structured to show a reasonable simulacrum of the shift in the oppressed youths' attitude leading up to the Brixton riot. The climax of the film is a spark that set the blaze off, fictionalized of course, which makes it somewhat unique in its story telling.

Buckmastuh
5.0 out of 5 stars The greatest hidden gem I've ever discovered
Reviewed in the United States on November 8, 2019
Verified Purchase
This has immediately entered my top 5 movies of all time. It's thrown my life slightly off axis since I first discovered it on the Criterion Channel. Beautifully shot, funny, tender, sweet, moving, rage-inducing- all at the same time. I'm sharing it with anyone who'll listen to me gush on about it, and so far, it's affected them the same way. And that soundtrack... Aswad's "Warrior Charge" is a KILLER.
Read more
One person found this helpful
Helpful
Comment Report abuse

Cody
5.0 out of 5 stars Classic uk London film
Reviewed in the United States on May 31, 2020
Verified Purchase
Great film, if you want to see London in 1980 this is a great film and time capsule of the era. Great movie and music.
Read more
Helpful
Comment Report abuse

Anthony Richardson
5.0 out of 5 stars Lion
Reviewed in the United States on December 10, 2019
Verified Purchase
Well worth the wait on Blu-ray.
Read more
One person found this helpful
Helpful
Comment Report abuse

Andrei s
4.0 out of 5 stars Babylondon
Reviewed in the United Kingdom on July 17, 2017
Verified Purchase
While there seems to be little to add to the many discussions & various views regarding this film ,I think for those who have seen this on a rare late night ch4 showing or have a copy from an old vhs recording, I can wholeheartedly recommended this DVD for the stunning improvements in its clarity, depth and colour range(& sound). Seen now in its intended ratio (1.78:1) with these improvements the film now in no way looks like 'a low budget UK quota filler'.
The extras are a worthwhile commentary and a Q&A following a screening, both of which feature the director, producer ,many of the actors & others who brought the film to the screen & (eventually) home viewing & DVD release.
There is an interesting item about the restoration of the film & it also has optional subtitles( reading some previous reviews I would recommend these for those not familiar with Jamaican/London style patois). Also included is a well designed booklet that has plenty of info + some good pics from the making of the film.
If you've seen this before you'll know if you want a rerun. But for those who haven't ,why not take a musical & social trip back to the London of 1980 & see what you think - personally I think this film has appeal beyond just nostalgia or interest in JA/UK style culture, & stands up as a vivid document of the times, a story about growing up & friends ,social class & questions of race, with good acting from a cast of local talent & a few faces soon to be TV regulars. With some great Sound System footage with good music, including Dennis Bovell,V.Jackson,Jah Shaka & Aswad,whose lead vocalist Brinsley Forde does a fine job playing 'Blue' the conflicted main character.

ToThaMax
5.0 out of 5 stars If you know Klashnekoff The Saga's Of
Reviewed in the United Kingdom on November 16, 2017
Verified Purchase
This came on London Live the other day and I recognised clips of it from Klashnekoff's Sagas album, I always wondered what film he had taken the snippets from. I love seeing the old sights of SE London where my family are from and I think some of Brixton. Also seeing the young Aswad, Jah Shaka and other faces. A good film. Had to get the DVD.
Read more
2 people found this helpful
Helpful
Sending feedback...
Thank you for your feedback.
Sorry, we failed to record your vote. Please try again
Report abuse

Michael McLean
5.0 out of 5 stars Authentic look at Black British youth culture of the early 80's
Reviewed in the United Kingdom on January 25, 2020
Verified Purchase
Excellent service. Package arrived on time and in excellent condition. Really enjoyed this movie and all of the extras. So good to have it on Blu-ray. This was a low budget film that became a Black British cult classic. Actors, locations, music and more are truly authentic. I simply had to have a copy.
Read more
Helpful
Sending feedback...
Thank you for your feedback.
Sorry, we failed to record your vote. Please try again
Report abuse

boffy
4.0 out of 5 stars babylon wow
Reviewed in the United Kingdom on September 8, 2013
Verified Purchase
love this film and so happy to have a permanent copy in my collection. the music,the acting the general accuracy of a time in Britain where black people were brutalised and victimised is spot on. it has some really funny entertainment value added with pathos and desperation. its serious but does not take itself too seriously. its funny but not flippant.

the actual dvd copy is of a very high standard sound and vision are good.

a must have for those that love reggae music and the 1970's. things have never been like this again. some of that good some of that sad

Gillian
5.0 out of 5 stars A must for anyone who has seen this before
Reviewed in the United Kingdom on April 16, 2017
Verified Purchase
Seen many times. The only sad thing is this version has bits missing which I saw on another version. It still does not spoil the enjoyment.
Read more
Helpful
Sending feedback...
Thank you for your feedback.
Sorry, we failed to record your vote. Please try again
Report abuse

Peter
5.0 out of 5 stars Good viewing
Reviewed in the United Kingdom on October 28, 2017
Verified Purchase
Another excellent reggae film with a sad ending.
Read more
Helpful
Sending feedback...
Thank you for your feedback.
Sorry, we failed to record your vote. Please try again
Report abuse

Lady Wallie
3.0 out of 5 stars Babylon video
Reviewed in the United Kingdom on June 26, 2017
Verified Purchase
It's ok enjoyable to watch
Read more
Helpful
Sending feedback...
Thank you for your feedback.
Sorry, we failed to record your vote. Please try again
Report abuse

Pamela
5.0 out of 5 stars Memories of old Brixton sw9 😀
Reviewed in the United Kingdom on August 24, 2016
Verified Purchase
Excellent ! Took me back to my school days ago n Brixton! My husband and I laughed and laughed.
Read more
Helpful
Sending feedback...
Thank you for your feedback.
Sorry, we failed to record your vote. Please try again
Report abuse
Load more international reviews

CrazyKittz
5.0 out of 5 stars Great Film
Reviewed in the United Kingdom on January 16, 2016
Verified Purchase
Great film from the 80s and you don't need to be a fan of reggae music to watch it!
Read more
Helpful
Sending feedback...
Thank you for your feedback.
Sorry, we failed to record your vote. Please try again
Report abuse

Heather
5.0 out of 5 stars Good movie
Reviewed in the United Kingdom on June 25, 2015
Verified Purchase
Reminds me of back in the day in the late 80s early 90s scene .Good movie
Read more
Helpful
Sending feedback...
Thank you for your feedback.
Sorry, we failed to record your vote. Please try again
Report abuse