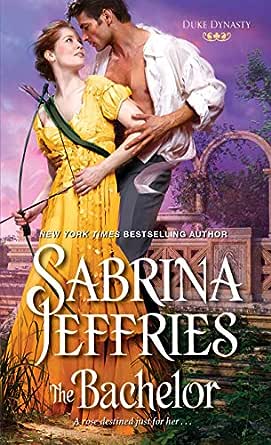 You've subscribed to Duke Dynasty! We will preorder your items within 24 hours of when they become available. When new books are released, we'll charge your default payment method for the lowest price available during the pre-order period.
Update your device or payment method, cancel individual pre-orders or your subscription at
Your Memberships & Subscriptions
There was an error. We were unable to process your subscription due to an error. Please refresh and try again. 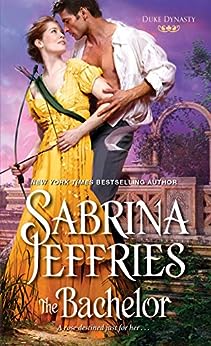 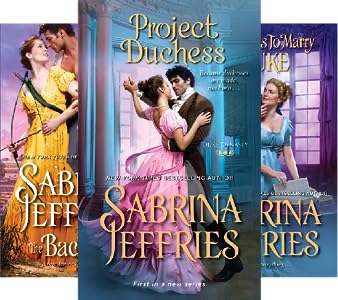 Praise for The Bachelor

“The Bachelor, the second entrancing book in Jeffries’ Duke Dynasty series (Project Duchess, 2019), beautifully showcases the author’s gift for creating vividly etched characters (including a well-matched pair of protagonists) and then expertly placing them within a tautly constructed plot spiced with danger and plenty of red-hot sensuality.” – Booklist

“Jeffries explores the cultural mores of early Regency London to weave a tale of blackmail, spies, and a Season debut. Joshua is a fascinating hero, the only untitled male among the series’ rather gentried family and always aware of the fact. There is an overarching series mystery developing, but readers yet to pick up the previous title, Project Duchess, shouldn’t be deterred.” – Library Journal

“Jeffries’s riveting first Duke Dynasty regency has a little bit of everything: an independent, forthright woman; a handsome duke with trust issues; and a mystery…Complex, intense characters heat up the pages with scintillating love scenes amid the intrigue. Jeffries continues to impress, and romance fans will eagerly await the next book.”- Publishers Weekly

“Readers will love Grey and Beatrice, and the nicely paced, intriguing plot will keep them engaged…An appealing historical romance from a fan favorite.”– Kirkus Reviews

"Excellent blend of great characters and witty dialogue makes this a delicious first in a new series." --BookPage (Starred Review)

“Master storyteller Jeffries is at the top of her game.” —RT Book Reviews, Top Pick on The Secret of Flirting

“With its irresistible combination of witty banter, well defined characters, and a wonderful surfeit of breathtaking sensuality, the latest in Jeffries’ Sinful Suitors series is a straight flush.” —Booklist, starred review on The Danger of Desire

“Lovely, poignant, and powerful.” —Kirkus Reviews on The Study of Seduction --This text refers to an alternate kindle_edition edition.

SABRINA JEFFRIES is the New York Times bestselling author of more than fifty novels and works of short fiction (some written under the pseudonyms Deborah Martin and Deborah Nicholas). Whatever time not spent writing in a coffee-fueled haze is spent traveling with her husband and adult autistic son or indulging in one of her passions—jigsaw puzzles, chocolate, and music. With over nine million books in print in more than twenty-one languages, the North Carolina author never regrets tossing aside a budding career in academics for the sheer joy of writing fun fiction, and hopes that one day a book of hers will end up saving the world.

She always dreams big. --This text refers to an alternate kindle_edition edition.