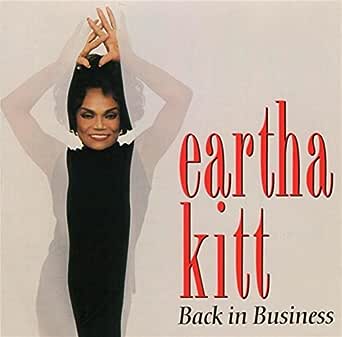 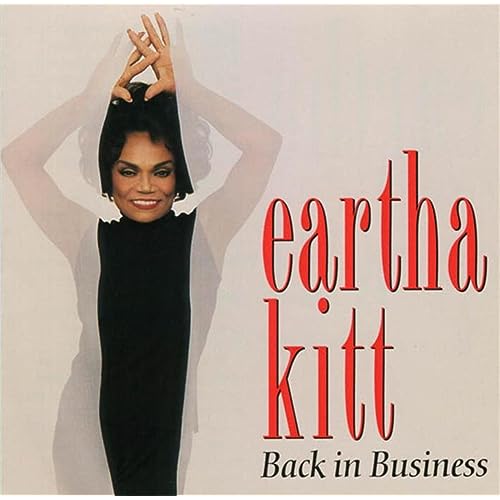 4.4 out of 5 stars
4.4 out of 5
7 customer ratings
How does Amazon calculate star ratings?
Amazon calculates a product’s star ratings based on a machine learned model instead of a raw data average. The model takes into account factors including the age of a rating, whether the ratings are from verified purchasers, and factors that establish reviewer trustworthiness.
Top Reviews

D.M.S.
5.0 out of 5 stars Great Purchase of Classic Music
Reviewed in the United States on September 20, 2009
Verified Purchase
Where else can a person go with confidence to purchase Classic Music such as "Back in Business by Eartha Kitt" than at the Amazon Store.
Read more
One person found this helpful
Helpful
Comment Report abuse

calvin wong
5.0 out of 5 stars Top Notch Artistry In Business
Reviewed in the United States on November 10, 1999
Without further explanation, Eartha Kitt is by far the most versatile and exciting artist of the last 4 decades. "Back in Business" is an offering that most fans have been hanging for and she doesn't disappoint. Adopting the comtemporary sounds of laid-back lounge jazz with live musicians, Eartha is again in control of the entire set by creating her trademark presence that translates well even on disc. Her voice remains forward and intimate throughout. No over-production or excess reverb to drown her out. You can almost feel her singing to you, like you are listening to a personal live performance. Hightlights include her seductive whisper in "Let's misbehave", the sung-spoken "Speak Low" and the deeply touching "Here's To Life". All songs are delivered with top notch confidence, with the trademark Eartha stamp purred all over them. Highly recommended for intimate nights alone or accompanied. "Back in Business" was nominated for a Grammy in 1994.
Read more
20 people found this helpful
Helpful
Comment Report abuse

AllThatChas
4.0 out of 5 stars Go see her live!!
Reviewed in the United States on July 5, 2006
I bought this album after a fantastic live show. The theme of the show was 'you can have me if you're a millionaire'. Unfortunately, I'm nowhere near a millionaire, but I was completely in love with this woman over twice my age. She still has the ways of a catwoman. After the show, which was so seductive and thrilling, the album was a bit disappointing. It's not a bad album at all, but it doesn't have as much spirit or byte as her live appearance. But I must say 'Let's Misbehave' is beautiful, especially the beginning with only the bass and miss Kitt's voice. And it's that voice which makes even the classic 'The Nearness Of You' much more than just an evergreen. I would recommend to go see her live, if you have the chance. And then buy the album anyway, just to remind you how great she is.
Read more
One person found this helpful
Helpful
Comment Report abuse

Christopher M. Martyn
4.0 out of 5 stars Still Fab!
Reviewed in the United States on October 10, 2007
Eartha Kitt has what it takes to make my knees weak!

This album shows that while time has changed her voice, she still can use it to the best effect. This album has that fun you expect from Eartha, but also has a serious side...slightly wistful, even.

"Back In Business", "Let's Misbehave" and "Moon River" are standouts on this disc.
Read more
One person found this helpful
Helpful
Comment Report abuse
See all reviews from the United States