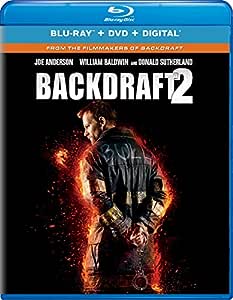 Characters from the film

Fire investigator Sean McCaffrey, son of the late Steven "Bull" McCaffrey, is now working at the same Chicago firehouse along with his uncle Brian (William Baldwin). When Sean is assigned to investigate a deadly fire, he and partner Maggie soon realize that they are dealing with something much more than a routine fire. The clues they discover lead them down a treacherous path of arson, murder, and international terrorism. Sean must use his intuition, along with the help of infamous jailed arsonist Ronald Bartel (Donald Sutherland), in a race to find out who is behind the fire and stop them from accomplishing their devious plans.

3.8 out of 5 stars
3.8 out of 5
272 customer ratings
How does Amazon calculate star ratings?
Amazon calculates a product’s star ratings based on a machine learned model instead of a raw data average. The model takes into account factors including the age of a rating, whether the ratings are from verified purchasers, and factors that establish reviewer trustworthiness.
Top Reviews

Rich Whitcomb
1.0 out of 5 stars Absolutely Dreadful!
Reviewed in the United States on May 20, 2019
Verified Purchase
Backdraft 2 is one of the worst movie's I've seen all year! The people who gave this movie 5 stars need to have their head examined. Donald Sutherland, and William Baldwin were the only two actors to reprise their roles in this movie. I'm not saying they should've brought back Kurt Russell or anything because that would be impossible, but maybe a cameo or two from some of the other actors/actresses for a scene or two. That might have helped, but I doubt it. The acting and story were absolutely terrible in this movie also. You would think they could've thought of a better story instead of just ripping off the first one, but I guess they just wanted to do the same and use the "Backdraft" name to make a quick buck. I liked the idea of having Joe Anderson play as Sean McCaffrey (Bull's son) and William Baldwin reprise his role as Brian McCaffrey (Bull's brother) and have that nephew, uncle, family thing, but it didn't seem to work out very good in my opinion. I'm very bummed this sequel sucked so bad because Backdraft is one of the best firefighter movie's ever made! I should've known since this went straight to print, but like everything else I watch, I had to see this for myself. I definitely don't recommend this, but if you're like me and still need to see for yourself, consider yourself warned. :)
Read more
21 people found this helpful
Helpful
Comment Report abuse

Jb
2.0 out of 5 stars Nope
Reviewed in the United States on May 21, 2019
Verified Purchase
I was excited when I heard they were making a backdraft 2. I loved the first one, it’s a classic. But they totally dropped the ball on this. It’s super cheesy and looks low budget. Highschool kids could’ve made a better movie. This is nowhere near the Ron Howard masterpiece that the original backdraft was. It became predictable and boring to sit through. I doubt I’ll watch it again.
Read more
5 people found this helpful
Helpful
Comment Report abuse

J. Larsen
2.0 out of 5 stars You're Doing It Wrong!!!!
Reviewed in the United States on August 19, 2019
Verified Purchase
Nearly thirty years after the Blockbuster firefighter classic “Backdraft” directed by Ron Howard, Mr. Howard and his partner Brain Grazer take a backseat as cheerleaders for “Backdraft 2.”

Here, we’re introduced to “Sean McCaffrey” (British actor Joe Anderson). The son of the late legendary smoke eater “Steven McCaffrey” (Kurt Russell), Sean is on the frontline of Chicago’s war on fire as an arrogant and maverick Fire Marshal detailed at OFI (Office of Fire Investigation). When a gang of trick-or-treaters gets fried in a suspicious fire by a CGI (Crap Generated Imagery) backdraft, Sean and his partner Maggie take the lead on the case. However, his tactics are at odds with his overly-protective uncle “Brian” (William Baldwin), the District Chief in charge of OFI. As a series of fires ignite, the investigation points to a terrorist arms smuggling plot and it’s up to Chicago’s Bravest to save the day.

Regrettably, there’s virtually no firefighting action nor camaraderie that made the original so great. The script lacks reality, character depth, genuine heart and soul as well as a complimentary soundtrack. Hans Zimmer, where are you?! I was curious for this unnecessary and ultimately undesirable sequel but they should’ve talked to the fans first. You’re better off watching “Ladder 49” or NBC’s procedural “Chicago Fire!” The Border Collie who helps Sean is my favorite co-star in this movie.

Amazon Customer
1.0 out of 5 stars Let down
Reviewed in the United States on May 16, 2019
Verified Purchase
I watched the original and fell in love with it. It made me want to become a firefighter. When I heard backdraft 2 was coming out I was stoked. Then I watched it. They had so much potential to make this an amazing movie. But they boned it. From the plot line to the CGI. I wish I could unsee it.
Read more
7 people found this helpful
Helpful
Comment Report abuse

Christi
1.0 out of 5 stars Spend money elsewhere
Reviewed in the United States on May 15, 2019
Verified Purchase
Awful movie. Period. Too many holes. Too many rabbit holes to follow. Never know what happens to remgale or the rest of the crew. The movie just flat out sucks. Waste of money
Read more
6 people found this helpful
Helpful
Comment Report abuse

George
1.0 out of 5 stars What a letdown...
Reviewed in the United States on May 22, 2019
Verified Purchase
Was so hopeful, I pre-ordered Backdraft 2 a few months ago. This has the feel of a horrible 90s made-for-TV movie shot in HD with crude CGI. Not even filmed in Chicago. Hiding this behind my Road House 2 DvD...
Read more
3 people found this helpful
Helpful
Comment Report abuse

Kindle Customer
3.0 out of 5 stars Backdraft 2
Reviewed in the United States on July 18, 2019
Verified Purchase
It's obvious that the people directing, writing, and doing the music for this sequel were definitely NOT the ones that did the original Backdraft. Killing off the uncle was so unnecessary. The overall writing was bad. And making Sean be like Ronald the arsonist? What were they thinking!! The movie is worth watching. But the effects, the writing, the story, fall far short from the first. I should have waited until the movie aired for free on Netflix rather than purchasing it.
Read more
One person found this helpful
Helpful
Comment Report abuse

Michael
4.0 out of 5 stars All about arson not to much firefighting
Reviewed in the United States on May 16, 2019
Verified Purchase
After watching backdraft for years and the hipe of 2 finally coming out . I can under stand it's about arson. But felt like it was an episode of Chicago fire . Great movie for the drama but it was nothing like the first. Ronald was really the only best parts of it .
Read more
2 people found this helpful
Helpful
Comment Report abuse
See all reviews from the United States