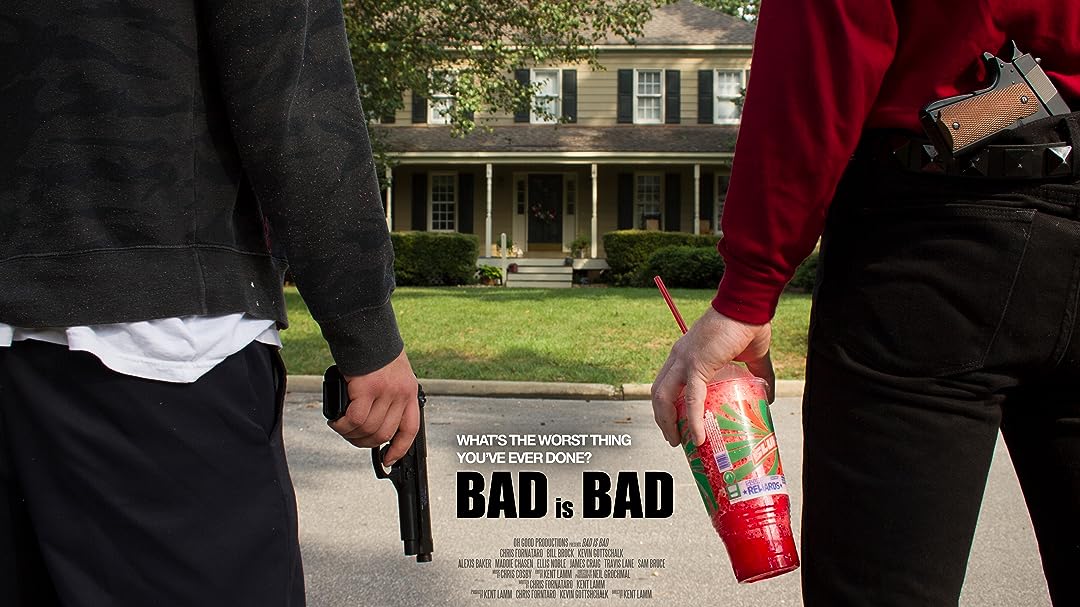 (135)
1 h 36 min201118+
A locally loved suburban family man has to pay for the worst thing he's ever done when two mysterious young criminals break into his home. "4 1/2 stars - A tremendous thriller... Will undoubtedly make a number of 'underrated lists' if enough people take the time to seek it out" - Film Threat. "One of the best home invasion genre films I've ever seen" - Rogue Cinema

Geoffrey F. ArnoldReviewed in the United States on February 22, 2021
4.0 out of 5 stars
This Bad is Good...
Verified purchase
...but it has its issues.

Jesse and Ray work for an unknown guy as collectors. But Jesse is also looking for someone, has been for some time. And he just happens to find this someone the day he is in this particular town to do some collecting. He actually walks into the restaurant owned by the guy he's looking for...and sees him.

And from there this story proceeds into the different. We are clueless until Jesse tells us by way of making our guy tell him the worst thing he's ever done. And this is the reveal, Jesse is this guy's son, born of rape.

From there it goes pretty much as you might expect. Jesse wants to kill him, but can't bring himself to do it. And finally decides to leave.

Ray, Jesse's lacky, is really the star of this film. The actor portraying Ray has a really great time creating and fleshing out this character. He isn't all there, isn't particularly good looking, has acne, wears glasses, is gangly and tall. And his dialogue is just brilliantly delivered. I bring this character up because he stands out so well, is so well portrayed.

Well, the ending of this film is where it lost a star. Not the general ending, but the final scene.

Honestly, we thought the fade out before that final "coda" was the better place to let the film end because it left you in the dark as to how the young son would happen upon his family...what his reaction would be.

The final scene seemed a bit forced in a way, like the director had to know the young son would be okay in the end. Yeah, well....I would have rather not known that for certain, but speculated on that after the fade out at the house.

Okay, there is foul language here, and usually that turns us off. But this film actually kept us wanting to know how everything played out. So we bit our lips and worked through the language issue.

I wish film makers would ease up on the language. It detracts from the watchability of films. It adds nothing in the bigger picture sense, nothing really necessary. Yes, these kinds of people talk like this in real life, and I know, I know, real life is what you're trying to portray in some ways, language being one of them. Fine. But, back in the old days, they portrayed real life quite well, without all the Fs and Ss and whathaveyous and the stories suffered not one bit.

Film makers: Not everyone who loves films loves hearing the overuse of the foul language we are hearing in almost everything these days. Consider the whole audience, not just your "target" audience. Ease up, please.

Omegagirl2020Reviewed in the United States on March 13, 2021
5.0 out of 5 stars
Outstanding
Verified purchase
Hollywood is kind of like McDonald's -- packaged and marketed to get a majority to open their wallets despite the inferior, cookie-cutter product. The truth is, you get a much better burger at that mom and pop place off the highway just outside of the city. Bad is Bad is that mom and pop burger. Stellar acting, directing, and filmography regardless of the budget. Definitely a gem. Some reviews say the storyline has been done before but I disagree. Yes, I've seen many captive films including Wait Until Dark, The Strangers, and Funny Games. Hard Candy is one of the most provocative of the genre, and Last House on the Left is one not to miss. But Bad is Bad will rate in my book in the top tier. Although it looks rough around the edges that becomes part of the character and is not a distraction. Every moment of the film is used purposefully. I like the way it feels authentic, detailing the personalities of the perpetrators, and using actual acting to induce surprise and shock. I think the title wants us to believe that Jesse has no redeeming qualities but I like the way the film has one moment where dialogue causes the viewer to think the next lines will be "bad is bad" but that line never actually appears in the film.

WALTReviewed in the United States on February 23, 2021
2.0 out of 5 stars
TWO STAR FILM WITH MOMENTS OF THREE STAR TENSION
Verified purchase
NO SPOILERS. FIRST, NOT A FAMILY FILM WITH SHOTS OF EXTREME VIOLENCE AND PROFANITY. THIS IS A VERY LOW BUDGET
MOVIE, WITH THREE MAIN PROTAGONISTS, AND A LOT OF IRONY. TWO LATE TEEN SOCIOPATHS ARE EATING IN A DINER WHEN
ONE OF THEM NOTICES A SMALL PHOTO OF A GIRL. HE SAYS NOTHING, AND WITH HIS FRIEND FOLLOWS A CAR. UPON REACHING
THE CAR PULLING INTO A DRIVEWAY, THE TWO TEENS FORCE THEIR WAY IN. THE TENSION BEGINS AS THE MORE VIOLENT ONE
ATTACKS THE MAN SHOWING HIM THE PHOTO OF A GIRL, WHO MEANS A GREAT DEAL TO HIM. FAST FORWARD TO THE MOMENT
WHEN SERIOUS VIOLENCE MAY OCCUR. NOW, A SUBSTANTIAL AMOUNT OF THE PLOT HAS BEEN SKIPPED TO AVOID SPOILING
THE FILM. YOU WILL SEE THE DENOUEMENT AND FINAL CONCLUSION TO WHAT IS A TRAGEDY OF ERRORS. I PLEAD QUILTY, I DID NOT SEE THE END COMING. TOUGH MOVIE TO REVIEW AS THIS IS ONE YOU EITHER LIKE OR HATE. THERE ARE SOME QUITE SCARY
SCENES. ENJOY.

DannoReviewed in the United States on October 4, 2019
2.0 out of 5 stars
Don't be tricked by the FAKE REVIEWS HYPING UP THIS B-RATED FILM
Verified purchase
This movie is an amateur film and while these amateurs might be 4.5-Star amateurs, that doesn't make this movie an undiscovered gem.
I rarely write reviews and when I do its because I think potential viewers of the movie need my input. These reviews need to be set straight. This movie is 2.5-Stars at best and all the inflated hype is likely by people who have never watched it. I was deceived by the plot and I hate for the same to happen to others. While the movie was not so bad that I just shut it off it by no means deservers these inflated reviews. If I had read a couple more reviews I probably would have seen the pattern. While the movie is not a complete dumpster fire, its definitely no "4.5 star / tremendous thriller" as quoted by Rouge Cinema in the plot. My guess is Rouge Cinema has a rouge critic.
2 people found this helpful

Johnny Rockaway Reviewed in the United States on November 20, 2018
5.0 out of 5 stars
Way more than meets the eye .
Verified purchase
How this movie slid under the radar is beyond me. Excellent writing, tight direction and acting that some people might consider less than Oscar worthy , I would bet those same people couldn't put as good a movie on the screen for $600,000 ... This film should have been treated better , the wrap around lake trip was a nice touch. It is clear that some people just don't like to see success that doesn't cost a fortune. Because that begs the nagging question, WTF am I doing with my life. Good job to all involved .
6 people found this helpful

DetectorReviewed in the United States on March 2, 2019
3.0 out of 5 stars
Bad is Bad, that's funny. It's almost not bad, but Bad doesn't quite measure up to good.
Verified purchase
Good production values, the cinematography is the best thing about this movie, and its crunchy enough in itself to sort of keep you going. The actors are not terrible, possibly would be useful in bit parts in a better scripted film. But, the story is...dumb...and the writing is not good enough, there are amateur mistakes throughout, and the characters are not developed, the dialogue can be tedious, repetitious, silly, or kinda dumb. The score is nothing you will remember after the movie, bare-bones instrumental (synthetic, I'm sure) that is 99% tempo, but you won't remember it as objectionable, either, which is a pretty good result. I've definitely seen a lot worse on Amazon, but unfortunately, by the time it ends, you will agree that Bad is bad is just not good enough.
One person found this helpful

Chris330rReviewed in the United States on March 12, 2021
1.0 out of 5 stars
Who knew home invasion could be so boring?
Verified purchase
Besides being boring, it was badly acted, like a high school play. To make matters worse it was badly edited making it all the more amateurish. When you finally reach the end of this bore fest, (I won't spoil it) it tries to shock you but what happens in those final 5 minutes it's so absurd and over the top that you wind up laughing at the stupidity of it all.
You'll also feel a tinge of anger that you spent over 90 minutes on this mess only to have it end the way it did, rendering everything you just watched a total waste of time. 1 star and that's being generous. At least it was free.

Joyce MReviewed in the United States on September 22, 2019
5.0 out of 5 stars
Bad is not that Bad
Verified purchase
I enjoyed this movie. The best part for me was seeing that Jesse, supposed head of the bad guys, actually had a heart. He wanted to be bad, to do bad things but he just couldn't do it. Ray on the other hand needed to be removed 1/2 way through. He was nothing but trouble for Jesse. The ending was kind of shocking and senseless but that's Ray, senseless. The acting was very good, the story line was good and different. Worth the time to watch.
4 people found this helpful
See all reviews
Back to top
Get to Know Us
Make Money with Us
Amazon Payment Products
Let Us Help You
EnglishChoose a language for shopping. United StatesChoose a country/region for shopping.
© 1996-2022, Amazon.com, Inc. or its affiliates