The Ball is Round: A Global History of Soccer Paperback – January 2, 2008

by David Goldblatt (Author)
4.6 out of 5 stars 131 ratings
See all formats and editions Hide other formats and editions
Read more Read less
Inspire a love of reading with Prime Book Box for Kids
Discover delightful children's books with Prime Book Box, a subscription that delivers new books every 1, 2, or 3 months — new customers receive 15% off your first box. Learn more.
click to open popover

The definitive book about soccer. With a new foreword for the American edition.

There may be no cultural practice more global than soccer. Rites of birth and marriage are infinitely diverse, but the rules of soccer are universal. No world religion can match its geographical scope. The single greatest simultaneous human collective experience is the World Cup final.

In this extraordinary tour de force, David Goldblatt tells the full story of soccer's rise from chaotic folk ritual to the world's most popular sport-now poised to fully establish itself in the USA. Already celebrated internationally, The Ball Is Round illuminates soccer's role in the political and social histories of modern societies, but never loses sight of the beauty, joy, and excitement of the game itself. 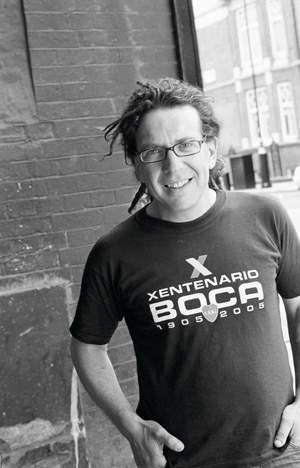 Amazon.com: There's a sentence in the middle of The Ball Is Round that to me sums up a great deal of the culture of football. After noting that Pelé had scored nearly a goal a game in over 1,300 professional matches--the sort of stat that would be on every page in a history of one of the major American sports but that is very rare in this one--you write, "This of course tells us nothing about all the goals he made." What stories do football fans tell about their sport and their stars?

Goldblatt: Well, in America not only would you be banging on about Pele's goal to game ratio but you would have been collecting statistics in a rational organized manner about his assists--a concept that had only entered soccer statistics in the last few years. The state of Brazilian football statistics during Pelé's career would not pass muster in Cooperstown in can tell you. Bill James would have a nervous breakdown with hopeless state of the data base. Soccer fans tell a lot the same stories that Americans tell themselves, sagas, epics, heroic tasks, near misses, dramatic comebacks, tales of curious individualists and unshakeable teams, but they are told in a the idioms, genres, vocabulary, and head space of hundreds of different cultures.

Amazon.com: I have to ask the inevitable question: why hasn't football--rather, soccer--ever taken hold in the United States (despite generations now who grow up playing it)? (And does the rest of the world care if it ever does?) I was fascinated by your comment in the American foreword that you recovered from finishing the book by ignoring soccer for half a year and only watching American sports. What did you notice?

Goldblatt: Contrary to the received wisdom I would say that soccer has taken hold in the US, if we look at participation figures amongst women and the young, and while MLS isn't about to challenge the premiership or Serie A for money or glamour it looks like it is now established on a firm footing. If the game can just tap into the rising Latino communities of America it could be pushing hockey for fourth sport.

That said it would still be just number 4. Baseball, football, and basketball have now had over a century's head start on soccer and between them created a wider sports culture--of expectations, tastes, and pleasures--that I think sometimes finds soccer incomprehensible ( what's with the draws?) or distasteful (all that diving). Soccer had its chance in the USA in the 1920s and 30s when East Coast professional leagues were drawing big crowds but a combination of bureaucratic infighting, the Wall Street crash, and the lingering ethnic associations of the game killed it for two generations.

My time with American sports, which I should add is far from over, wasn't planned. After the 2006 World Cup I just couldn't watch any more soccer and there was an awfully big space in my brain where that used to go on. Moneyball by Michael Lewis came into the void and that took me to Jules Tygiel and the great tradition of baseball histories, Ken Burns's long documentary which enchanted me (watched the whole thing in two days) and by the time I had read Roger Angell and stopped laughing, discovered Jackie Robinson, DiMaggio's Streak, and the Shot Heard Round the World it was time to subscribe to NASN and watch the last two months of the 2006 season. If you like the places where culture, society, sport, and history intersect then you're going to like baseball. I'm still working on hockey, in fact I'm still working on seeing the puck, and I'm trying hard to understand football--but I'm finding the helmets, amongst other things, a problem.

What did I notice? Where do I begin? After barely thinking about the United States for three and half years the whole modern history of America opened up before me. That's a work in progress.

Amazon.com: It's hard to underestimate the density and breadth of knowledge that went into this book: politics, culture, and of course football, across the entire football-playing world (which is to say, the entire world). How did you research your vast topic?

Goldblatt: The Ball Is Round was, in retrospect, 20 years in the making. I had wanted to write a world history since I knew that such things existed. In a former life I spent a long time working on globalization and global history and then I made a global atlas of football, so I had plenty of background.

After that, I followed Phillip Pullman's advice, "Read like a butterfly, write like a bee." I read a lot, followed my nose and other's advice, scoured journals, libraries and old magazines, studied web sites, visited museums, stadia, and shrines, made contacts in a lot of countries, and begged, bought, and traded information and opinion--oh and I watched an awful lot of football.

There were trips to Scotland, Sweden, Serbia, France, Germany, Italy, Austria, Greece, Tunisia, Uruguay, Brazil, and Argentina not to mention a lot of old games on video and DVD.

How did I write it? Fast.

Amazon.com: There is nearly as much politics in your history as football--among Argentines, for instance, Peron has nearly as many index entries as Maradona. Why did you not want to write a history only of the players and the games? What relationship do you see between football and politics?

Goldblatt: How could anyone write a history of just players and games and be true to the meaning of soccer? Milan Kundera defended the role of the literary critic by arguing "Without the meditative background that is criticism, works become isolated gestures, historical accidents, soon forgotten." I would say the same of same of social history and sport. All sports trade on their histories, but tend to offer us at best the anodyne accounts of their own development and meanings at worst they are scurrilous cover-ups and concocted myth. Sport and its audience deserve better.

The relationship between football and politics takes many forms--it has been entwined with every conceivable political ideology and movement, every geographical unit and social division, and it has served authoritarian and democratic visions. In the end, football will take on and express the politics determined by our collective choices and struggles, the point for me is to remember that one has choices; to some extent we get the soccer we deserve.

Amazon.com: Has modern football become too big for itself, between the tycoons and the multinationals, the giant audiences and transfer fees, the corruption and the endless media coverage? Is there still space for the game?

Goldblatt: I went to see Manchester United last year in the Champions league--a 70th birthday present for my Mancunian father-in-law--and here at the epicenter of the global branding revolution and the foreign takeover and the rest of it I was privileged to see Carlos Tevez take the game by the scruff of the neck and force 21 players and 70,000 people to track his every move--electric.

Come to Bristol, England's most underperforming soccer city (half a million people, two clubs, no titles) and tell me there's no space for the game. No one is going to Bristol Rovers to be part of giant audience or a world shaped by tycoons and multinationals. But go they do, and to Bristol City too, teetering on the edge of the premiership and there I find a game that makes me laugh--soccer does pantomime and farce here--but surprises, thrills, and reminds me as part of a living crowd the one thing that writing a world history really drives home--"we are all just a drop in the ocean."

Amazon.com: And lastly: who's your favorite for Euro 2008?

Goldblatt: It feels really open--so I'm going with an outsider (like Greece at 2004)--Croatia.

"Football conquered the world with its capacity to astonish, and this is its definitive history." --The Independent

"Since it became a worldwide phenomenon, nobody has attempted to write an overall history of the game. Now David Goldblatt's stunning book will be the measure against which all other such volumes are judged." --The Guardian

"Goldblatt writes with authority, humor, and passion, not least in the accounts of famous or significant matches scattered throughout the book... there is no doubting the worth of David Goldblatt's extraordinary book." --Times Literary Supplement (London)

"Goldblatt's magnum opus, at close to a thousand pages, is an ambitious project realized in a most impressive manner. Anyone with a brain and an interest in football will enjoy this book: just don't drop it on your foot." --The Daily Telegraph (London)

"Just possibly the most erudite football book ever, yet also a very good read. Goldblatt doesn't just understand the social context of the game around the world; he also has a nose for the best stories. This book is a mindboggling achievement." --Simon Kuper, author of Soccer Against the Enemy

Among many other things, David Goldblatt is the author of The Games: A Global History of the Olympics, and the writer and compiler of Dorling Kindersley's World Football Yearbook. Born in London in 1965, he now lives in Bristol, England.
Read more

Page 1 of 1 Start overPage 1 of 1
This shopping feature will continue to load items when the Enter key is pressed. In order to navigate out of this carousel please use your heading shortcut key to navigate to the next or previous heading.
Back
Next
Pages with related products. See and discover other items: global history, olympic games, Best balls for soccer