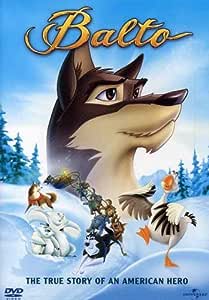 Amblin Entertainment presents a dazzling, animated adventure about one of the most courageous canines of all time! Based on a true story, Balto will touch your heart. Part husky/part wolf, Balto doesn't know where he belongs. He's an outcast in Alaska, except to his true friends - Boris, the Russian snow goose; polar bear cubs Muk and Luk; and the beautiful husky, Jenna. Even though he's different, all of Balto's friends recognize what he still can't see himself: his noble spirit. One day, a serious diptheria epidemic spreads fast among the children of Nome. When a fierce blizzard closes off all routes of transport, there's no way to obtain lifesaving medicine...unless a team of sled dogs can race six-hundred miles through the blinding Arctic storm and bring back anti-toxin. But when the dogs get lost in the frozen wilderness, only Balto can rescue the team and save the children. Starring the voices of Kevin Bacon, Bridget Fonda, Bob Hoskins and Phil Collins, Balto is the remarkable tale of a hero who inspired a nation - and became a legend!

4.7 out of 5 stars
4.7 out of 5
1,773 global ratings
How are ratings calculated?
To calculate the overall star rating and percentage breakdown by star, we don’t use a simple average. Instead, our system considers things like how recent a review is and if the reviewer bought the item on Amazon. It also analyzes reviews to verify trustworthiness.

Blu-wolf
5.0 out of 5 stars Balto Blu-ray is amazing!
Reviewed in the United States on July 8, 2017
Verified Purchase
This is a review for the Balto blu-ray released on July 4, 2017.

Balto is one of my favorites from childhood despite the fact it was overshadowed in its year of release, and never really got the recognition it deserved. Its very loosely based on the true story of Alaskan husky, Balto and his role in carrying diphtheria medicine to Nome in 1925. The film itself takes many liberties with the real story, including the fact they say Balto is half-wolf, when he never was. This was not meant to be a historical documentary, it was meant to be good family fun, and it succeeds in that department.

Now for those blu-ray fans....what did Universal give us?

Video is somewhat grainy, but this is not a bad thing in itself because it means that Universal did not do what Disney sometimes does and tries to remove every speck of dust they can find, removing some of the texture and quality of the painted cells in the process. The film isn't that old, so the grain isn't as apparent as what happened when Land Before Time came out on blu-ray. This is also the first time in the United States we have the opportunity to see Balto in widescreen 1.85! When I watched it, I saw things I didn't remember largely because they were not chopped off the sides on all the previous DVD releases we had to put up with. Video bitrate hovers around a healthy 30mbps.

Audio is amazing on this blu-ray as its presented in HD-5.1 Master Audio. I've never heard Balto sound better, if you have a decent system to show it off. Watching the white wolf scene, I noticed James Horner's score being more crystalline and with more sparkle than it ever had, even more than on the CD soundtrack, which was already mastered well!

Unfortunately, no extras are there. That's a shame because there is a Making Of featurette out there. For those that want to browse google, the 30 minute Making Of documentary that was released over in Europe on one of their DVD releases. There are also other documentaries to be found about the real Balto online if you're so inclined to learn more about the four-legged hero of Nome (and Togo too!).

Overall, I was shocked Universal released this on blu-ray at all, given it was already making its rounds on streaming services. I won't complain about the lack of extras, just happy to finally have the film in its proper aspect ratio and in HD!

CZ
5.0 out of 5 stars An old favorite my students loved!
Reviewed in the United States on January 10, 2018
Verified Purchase
This was one of my all time favorite movies as a kid. I used to watch it so much we named our golden retriever after the female dog lead. I purchased it to watch with my students after we read the non-fiction narrative of the true story, and they LOVED it! Also, with it being on Amazon Instant, I don't have to worry about losing a DVD, tracking it down after it's borrowed and not returned, or it being blocked on our school internet (looking at you Netflix...). Plus I'll have it as long as Amazon continues its services (which seems like it'll go forever!). Definitely buy this movie!
Read more
One person found this helpful
Helpful
Report abuse

Ahab
1.0 out of 5 stars The “Not at all
Reviewed in the United States on October 14, 2019
Verified Purchase
The “not at all true story” of an American hero. The truth was cool enough by itself, but they made such a weird twisted version of it that my kids were just confused the whole time and I was waiting for it to end. This DVD went in the trash bc I wouldn’t subject anyone else to it.
Read more
4 people found this helpful
Helpful
Report abuse

CgeorgeTop Contributor: Knitting
5.0 out of 5 stars Classic
Reviewed in the United States on February 8, 2017
Verified Purchase
I bought this as a Christmas present for my two year old cousin. You have to be careful with kids movies these days, but I remembered this movie from my childhood and decided to go with it. Of course, my cousin loved it, but to my surpise his parents and I also had a great time re-watching this movie from our past as well.
Read more
2 people found this helpful
Helpful
Report abuse

JC
4.0 out of 5 stars High quality visuals, sadly no extra content
Reviewed in the United States on April 21, 2020
Verified Purchase
I loved this movie growing up and am so happy and grateful I can watch it with my family now in such beautiful blu-ray high definition. The high quality visuals breath more life into the story, which still holds a timeless simple lessons on selflessness and learning how to become a good leader.

Only con is that there are no extras! Would have loved to see some behind the scenes of this hidden gem.
Read more
Helpful
Report abuse

eeveesoulsilver
5.0 out of 5 stars Amazing Story of a True American Hero
Reviewed in the United States on March 5, 2014
Verified Purchase
I've always loved this movie since I was a kid. This movie is a heart-warming story about a half-husky/half-wolf named Balto who can't seem to find his place in society. Balto despises his wolf lineage because it makes him different and not accepted by the people or dogs of Nome, Alaska. This story tells how Balto must come to accept both sides of his lineage and discover that his wolf part is a blessing and not a curse. As Balto tries to fit in, a horrible disease starts to spread through Nome and puts many of the kids at the risk of death and Balto is the only one who can save the day. This task won't be easy though as the main sled team that left to fetch the medicine 600 miles away gets lost and even though Balto finds the sled team, Balto has to guide the team back while overcoming many obstacles such as a menacing blizzard, perilous cliffs, avalanches and a frosty cavern with many dangers. The animation is very on spot for a cartoon, the voice-acting is very good while keeping each of the characters sounding unique from most movies, the humor is good for all ages, and the story is very touching. If you having seen this movie you should show it to your children as it's a family movie that any age would enjoy.
Read more
One person found this helpful
Helpful
Report abuse
See all reviews

stephaniejjhorne
4.0 out of 5 stars Balto
Reviewed in the United Kingdom on April 10, 2013
Verified Purchase
Based on a true story, balto follows the adventure of a half wolf half husky who wants to prove his worth to himself, to the other huskies and the towns folk. When the children of the town become ill, the only way to get medicine to them is by sledge led by huskies, but when the team goes missing, balto takes it upon himself to find the missing sled team and deliver the medicine.
There are lots of nice plot twists and plenty of humorous moments as well as perils and villains. I would recommend this film to children, especially those who love dogs or to anyone who is child at heart and loves a good story, like myself.
Read more
One person found this helpful
Report abuse

Miss cherry
5.0 out of 5 stars One of my favourite films.... I love this movie
Reviewed in the United Kingdom on May 7, 2013
Verified Purchase
When I was a young girl my mum and dad bought me Balto VHS tape for my birthday or Christmas present. I never got bored of this movie. When the DVD players replaced the old VHS machines I could no longer watch my VHS tapes anymore and they were put in a bag at the bottom of my old wardrobe. I was disappointed when I realised I couldn't watch my Balto tape anymore. It had been a very long time since I last watched the Balto film so I was pleased to find it available on the amazon site so I purchased it straight away. When I watched it for the first time in ages I laughed again at Muk and Luk, the polar bear cubs and Boris the goose. Even though I am in my twenties Balto will ALWAYS be one of my FAVOURITE films.
Read more
Report abuse

R. Wilson
5.0 out of 5 stars Classic
Reviewed in the United Kingdom on April 11, 2013
Verified Purchase
I used to watch this all the time on video at my grandma's as a kid, and so seeing it on DVD i just couldn't resist. Even now at the age of nearly 20 i love it, always a child at heart! Is a lovely story and a film i will be sure to get my future kids to watch
Read more
Report abuse

Amy21
5.0 out of 5 stars Brilliant film and great bonus feature!
Reviewed in the United Kingdom on March 19, 2014
Verified Purchase
This is brilliant film and I love the fact it's based on a true story. The film bonus features also has a documentary on the real balto and his life and what he did. DVD was well packaged and film is of good quality. Inspiring and touching story with a brilliant cast to tell it.
Read more
Report abuse
See all reviews