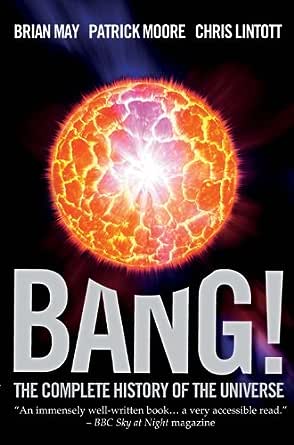 Flip to back Flip to front
Audible Sample Playing... Paused   You are listening to a sample of the Audible narration for this Kindle book.
Learn more
ISBN-13: 978-1780971698
ISBN-10: 1780971699
Why is ISBN important?
ISBN
This bar-code number lets you verify that you're getting exactly the right version or edition of a book. The 13-digit and 10-digit formats both work.

"Highly recommended for community library astrology collections and for anyone who wants a unbiased look at the universe itself."

"The story is told in clear, straightforward terms, in the strict order in which the events happened, and uses no mathematics."

(Steve Goddard History Wire - Where the Past Comes Alive)

"There's at least one rock star who knows a thing or two about real stars."

"The scope of the book is ambitious; its hard to cram in antimatter and inflation in one chapter and then skip to planetary science and biology in the next. Still, the authors do a wonderful job tackling a broad array of cosmic subjects. This is just the kind of book that would have fired up my imagination as a kid!... In the end, Bang! is an excellent illustrated compendium for what are perhaps weightier and less accessible tomes."

(Journal for the History of Astronomy)

"It basically takes the reader on a tour of the entire universe, and tells you everything you wants to know... It's beautifully described, accurate and they feature fantastic photography. If you like astronomy and those Hubble pictures on the Internet, don't know much but would love to learn more, this would be a great book for you."

(Philip Plait FiveBooks) --This text refers to the hardcover edition.

Brian May is the founding guitarist of the rock band Queen and a longtime astrophysics enthusiast. He recently was awarded a Ph.D. in the field by the University of London. Patrick Moore has been studying astronomy since long before mankind made it into space and was knighted for his service to the science. He is the host of The Sky at Night, the author of more than 70 astronomy books, and the co-founder and former president of the Society for Popular Astronomy. Chris Lintott is an astrophysicist who specializes in star formation.