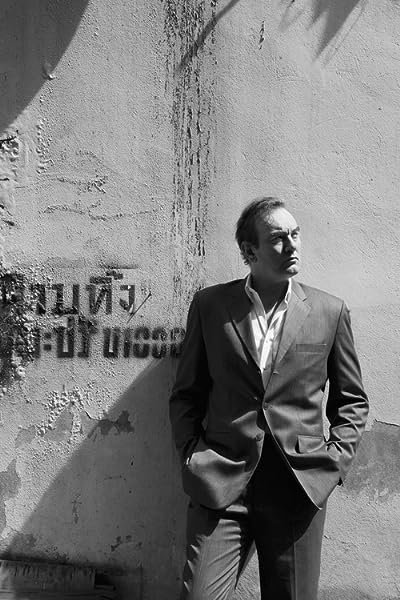 Start reading Bangkok Days: A Sojourn in the Capital of Pleasure on your Kindle in under a minute.

4.1 out of 5 stars
4.1 out of 5
85 global ratings
How are ratings calculated?
To calculate the overall star rating and percentage breakdown by star, we don’t use a simple average. Instead, our system considers things like how recent a review is and if the reviewer bought the item on Amazon. It also analyzes reviews to verify trustworthiness.
Top reviews

"I liked the hesitant motion of lonely men walking through their own vacuums to get to a massage parlor, the way the green neons of the massage parlors themselves suddenly came on, as if remembering something. I admired this impersonality, because it was my sort of impersonality, and I was tired of churches in Europe, and brown-stones and parks and stone beauty in general."

The theme is a rumination on lonely European men (specifically British and Australian) in a place they don’t belong. It’s a very dense book, especially if you’re an older European man or may become one. I’ve read it several times and still find new reflection and meaning. The novel combines the exotic surroundings – the food, Hinduism, Buddhism, Thai customs and history, Thai women, Asia vs. the West, the changes in Bangkok over his time there – with a more universal exploration of European men, their quirks and desires, women in general, the fluidity of sexual identity, being poor and how that affects one’s relationship with other men and women and an overall elegiac tone of regret. The protagonist, a not overly cynical man, searches for meaning and what is the good, possibly finding it in hedonism but contradicted by a trip to some missionaries in a Bangkok slum. Osborne finds contradictions, release and tension.

There’s quite a bit of brutal, droll humor involved in his adventures as well. In fact, I think Osborne specializes in brutal, droll humor. The book ends with a failed trip to a new age spa in Hua Hin (apparently during a hurricane) accompanying a professional travel writer, his calculating Thai wife and a possibly gay friend where all are puritanically lashed, only to escape to the dubious pleasures of eating, drinking and more or less unsatisfactory fornication.

Bruce D. Johnson
5.0 out of 5 stars A Look At A City Like No Other
Reviewed in the United States on November 13, 2018
Verified Purchase
This is not a tour guide nor is it a story of what to see in Bangkok if you go. But if you do go you will want to read it and maybe even have it with you. It is a deep dive into the world of the expat in Bangkok and how the city is seen from that perspective. But, the author does love the city and he shows his understanding through the comments he makes about the average Thai people encountered in his sojourn there. A very striking book.
Read more
2 people found this helpful
Helpful
Comment Report abuse

G. Simon
5.0 out of 5 stars Well Done!
Reviewed in the United States on December 8, 2015
Verified Purchase
Having spent 2012 in BKK, I found Mr. Osborne's experience / perspective of the city of Krungthep to lie consistently between 'reasonable' and 'spot on'. Dry, witty, understanding, non-judgmental, and definitely more for a Western reader (like me) who felt the profoundly high learning curve amid the daily 95 degree temps. Good writing, and good read, Mr. Osborne.

[Side note: Anyone else who enjoyed this *might* also enjoy "WIndup Girl"]
Read more
2 people found this helpful
Helpful
Comment Report abuse

Jeffery P Davis
5.0 out of 5 stars Author Larwence Osbourne never disappoints
Reviewed in the United States on November 2, 2019
Verified Purchase
A big fan of author, Lawrence Osbourne. He rivals Chandler and Elmore Leonard. Take a stroll with him through mysterious Bangkok, with a retinue of expat eccentrics/losers and local characters of varying stripes.
This paperback was in great shape and shipped fast with using the standard free option.
Read more
Helpful
Comment Report abuse

Fearless Fed
4.0 out of 5 stars A singularly insightful writer about ex-pats and the average asian man and woman
Reviewed in the United States on March 2, 2015
Verified Purchase
Took up this book after reading his fascinating tale of the gambling scene in Macao.Can't think of any other author writing about south east Asia in such detail and with such authenticity. There is a weak point to Bangkok Days in that it just sort of peters out at the end. If something was resolved I missed it
Another aspect is it is a singular tutorial on Asian religious beliefs
Read more
2 people found this helpful
Helpful
Comment Report abuse

Robert Rose
5.0 out of 5 stars Travelers will love this book!
Reviewed in the United States on November 18, 2019
Verified Purchase
Absolutely loved this book. Am obsessed with reading more by this author.
Read more
Helpful
Comment Report abuse

Steve Rosse
4.0 out of 5 stars Lonely, lonely guy
Reviewed in the United States on January 17, 2019
Verified Purchase
This book is not so much about Bangkok as it is about how to survive soul-crushing loneliness. But the writing is superb.
Read more
Helpful
Comment Report abuse

lynne knauf
3.0 out of 5 stars Good read before a visit
Reviewed in the United States on April 3, 2019
Verified Purchase
It’s a thinking persons introduction to Southeast Asia’s challenges, spiritually, psychologically, and visually. Narrator does a lovely job blending the beautiful with the sordid
Read more
Helpful
Comment Report abuse
See all reviews

Bruce Lawson
4.0 out of 5 stars Not a novel; a meditation on a City, let down by bad editing
Reviewed in the United Kingdom on June 3, 2015
Verified Purchase
As an erstwhile long-term resident of Bangkok, I got the pleasurable thrill of recognition from seeing places I knew described. Although I was initially taken-aback by the plotless prose, I soon began to enjoy its more meditative aspects - the associations of sex, love, death and decay: "a man who has no taste whatsoever for sleaze is half-dead"; "what Bangkok offered to the aging human was a culture of complete physicality. It was tactile, humans pressing against each other in healing heat: the massage, the bath, the foot therapy, the handjob, you name it. The physical isolation and sterility of Western life, its physical boredom , was unimaginable."

Noel King
5.0 out of 5 stars Chase this man's oeuvre!
Reviewed in the United Kingdom on August 10, 2015
Verified Purchase
Terrific account of Bangkok and a lovely cast of local and expat characters, very funny and very astute.

Follow the author on into two recent novels, Ballad of a Small Player, Osborne's enthral king, atmospheric novella set in Macau detailing the death drive of a Brit lawyer who has absconded with clients' funds to gamble, drink and debauch himself into the afterlife in Macau's casinos. Then read Hunters in the Dark to see Osborne move over the Thai border into Cambodia to generate a novel that stands alongside the late died-too-young Robert Bingham's wonderful Lightning on the Sun.
Read more
2 people found this helpful
Report abuse

Ting Tong
4.0 out of 5 stars enjoyed it!
Reviewed in the United Kingdom on March 16, 2014
Verified Purchase
the book started a bit too slow for my liking, but once it got going, I couldn't put it down!
Read more
Report abuse

Amazon user
4.0 out of 5 stars excellent book
Reviewed in the United Kingdom on October 13, 2013
Verified Purchase
not finished reading it yet but so far very good. Bought following my recent trip to South East Asia. didn't want that to end
Read more
Report abuse
See all reviews