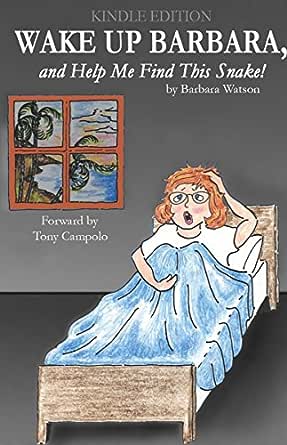 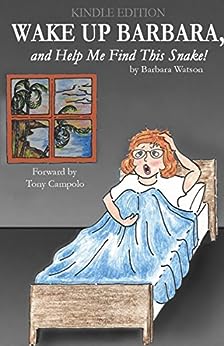 Wake up Barbara, and Help Me Find This Snake! by Barbara Watson forward by Tony Campolo Kindle Edition

Whistler's Mom
TOP 500 REVIEWER
4.0 out of 5 stars I could take the tarantulas or Ralph, but not both
Reviewed in the United States on February 14, 2019
Verified Purchase
Don't remember the circumstances in which I acquired this book a year ago. I remember that I found it intriguing then and I've enjoyed re-reading it. I'm not a person of faith, but I generally like books by missionaries. Those who take their evangelical zeal seriously enough to become foreign missionaries may be (and usually ARE) a bit screwy, but they're seldom boring.

The book is a series of letters written by or to the author. At the start of the book, she's a student at a conservative Christian college in Pennsylvania and regularly coresponding with a childhood friend who's attending a Christian college in Texas. I was struck most strongly by the intelligence of the two young women and the fact that they appear to be living in a time warp. Their attitudes and aspirations are more like those of girls in the 1950's than in the mid-1970's. At a time when most young women were training for careers and enjoying dating (including active sex lives) Barbara and Sue are concentrating on remaining pure and praying for God to send them good Christian husbands.

God must have a sense of humor. Sue is obsessed with a hell-raiser she can't live with and can't live without. And Barbara falls in love with the campus misfit, Ralph. Ralph calls himself a "rogue." Most people call him obnoxious. But Barbara is convinced that God wants her to marry Ralph and follow him into the mission field to live "sacrificial" lives.

Moving to the Dominican Republic to work at a mission that coordinates medical clinics puts Ralph's mechanical abilities to good use, but doesn't change his personality. One visiting missionary ("a sweet grandmotherly type") is so offended by Ralph that she advises Barbara to have her marriage annulled. And these are evangelicals who take marriage vows seriously! The easy-going Dominicans love Ralph, but he continues to butt heads with both permanent staff and visiting workers.

Barbara must contend with all the stresses that every young wife experiences (including her hostile mother-in-law) and with heat, uncomfortable living conditions, sketchy electricity, the absence of hot water, and tropical insects. The isolation she experiences is worse than the physical discomfort. Missionaries aren't saints, but real people with normal human emotions. They don't always get along.

To some extent, this is the story of a young woman who marries and then grows up. Her introduction to feminism came late, but she got there. After several years of marriage, she began to recognize that she must establish her own identity or reconcile herself to forever remaining a passive, unhappy child. She grew to admire her eccentric husband's strengths, but learned to value her own, too. She wrote to Sue, "...there is more to my life than my marriage - a fact I never considered until I got married." Meanwhile Sue is establishing herself as a hard-working teacher. She still hopes to achieve a Christian marriage, but loves the independence and fun of her single life.

The lives of both women took unexpected turns. Sue's was tragically cut short. Barbara stayed married to Ralph, but they eventually returned to the U.S., had a child, and took "civilian" jobs. Almost twenty years after their departure from the Dominican Republic, Barbara went back as a member of a medical mission project. She rediscovered her love of the Dominicans and was touched to realize that she was fondly remembered there for her work and the sweetness of her disposition.

It's a fascinating book. If you're not religious, you can skip the preachy parts. But missionaries come to know the people they serve in a far deeper way than tourists, business people, or even ex-pats. Missionary work is NOT the process of the Haves graciously helping out the Have-nots. It's an exchange of love. No one can criticize that.

Al Portes
5.0 out of 5 stars Wonderful and very real!
Reviewed in the United States on January 6, 2019
Verified Purchase
Barbara writes a courageous story in her unvarnished perspectives. How God uses everyone and every experience, while she doesn't deny her own humanity. Simply fascinating. May it inspire a fresh desire for missions in young hearts.
Read more
One person found this helpful
Helpful
Comment Report abuse

Amazon Customer
5.0 out of 5 stars I can see it all clearly . . .
Reviewed in the United States on June 21, 2016
Verified Purchase
Very interesting and honest portrayal. I knew Ralph and some of the other people as I was at Eastern at the same time, but did not really know Barbara. A very good read. Couldn't put it down until I had finished it.
Read more
2 people found this helpful
Helpful
Comment Report abuse

johnsensei
5.0 out of 5 stars Five Stars
Reviewed in the United States on May 2, 2018
Verified Purchase
Arrived on time and in great shape.
Read more
Helpful
Comment Report abuse

Simona Nielsen
5.0 out of 5 stars An amazing story!
Reviewed in the United States on April 29, 2003
This is the true and amazing story about a missionary couple's four years in another country and culture so much different from what they know.

If you think missionary work is `romantic' - think again! Barbara followed her very remarkable and charismatic husband, Ralph to the Dominican Republic, where she actually had a culture shock and struggled with everything that was new to her - the language, the heat and the two-inch cockroaches - just to name a few of them.

Ralph - on the other hand - adored the place, the people, the other culture and the music and did whatever it would take to make Barbara feel comfortable in their new home.

The book is written in letter form - especially from the correspondence of her best friend, Sue, but also from letters to her family and other friends. She reveals everything there is to know about being a missionary in another culture and is most honest about it. I'll really recommend this book to everyone who wants to read a real person's memoir and get a realistic insight in a woman's life among strangers.
Read more
3 people found this helpful
Helpful
Comment Report abuse

Jane MacDonald
4.0 out of 5 stars One Tough Babe
Reviewed in the United States on June 25, 2002
Barbara Watson is one tough babe. The trouble was that when her brand-new husband spirited her off to the Dominican Republic to be a missionary's wife, she didn't know she was tough. I'm not sure she realizes it even now.
Growing up in a loving family, Barbara was a good girl, the kind of girl who spends her teen years preparing herself to be a loving--and self-effacing--Christian wife. One of the reasons I enjoy reading memoirs is to meet people who aren't a bit like me, and in Barbara I hit the jackpot.
Because her standards were so high, she didn't think much of herself, and everything in the DR conspired to confirm her opinion. Her husband Ralph, an intelligent, boisterous man, made people laugh and made himself indispensable. Barbara had a terrible time learning the language, cringed at the very thought of living in the bug-infested, primitive medical encampment, and never thought she was pulling her weight by sorting used spectacles and doing the other tasks she was assigned.
She thought marriage would change her for the better--she'd become a more fitting wife for her charismatic husband. Listen to her: "But I'm still me, which is a disappointment." Ralph loved her, though, and pushed her to fly a little higher. She also thought that "being in a missionary setting, everyone would be sweet and kind." Guess what? They turned out to be people, and you know what they're like. But she hung in.
I couldn't believe the naivete of this woman when I first started reading her memoir, which is put together as a series of letters she wrote and others wrote to her, but watching her grow was fascinating. And grow she did, while holding steadfastly to her principles and beliefs, and gradually coming to realize that God must have had a purpose when he made introverts like her. Not until her four years in the DR were over, and she found herself a job in an animal shelter when they moved to South Carolina did she finally begin to recognize what she'd discovered: "I have always felt I'd be in the shadow of whoever I married and my needs would be filled by the fulfillment of his needs," she wrote to her best friend. "But you know something? I have needs, too." I felt like applauding when I read that.
She tells the story of her unlikely courtship here, and it's poignant and hilarious at the same time. Life in the hinterlands of the DR was a hard school, and her letters are full of the places she saw and the people she met, and the mixed emotions they
enerated--this book would be invaluable for anyone who considers the missionary life, and illuminating to those of us who would never even think of such a thing. She calls those three years a profound learning experience, and people who read her letters will thank her for letting them live with her as she learned.
Oh, about that snake. I'm not going to tell you what happened--you'll have to read the book yourself.--J.M.
Read more
One person found this helpful
Helpful
Comment Report abuse
See all reviews from the United States