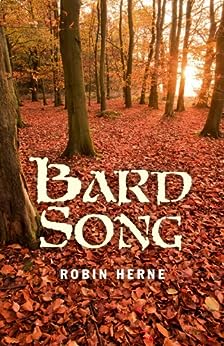 by Robin Herne (Author) Format: Kindle Edition
See all formats and editions
Sorry, there was a problem loading this page. Try again.
Bard Song is a collection of poetry, mostly in medieval Welsh and Irish metres, and reflections on the nature of the Bard in early Celtic society and the role of poetry within modern Druidry and polytheism generally.

This little book is a joy to savour and digest, Robin succeeds in explaining the complicated nature of Poetic metering with ease and delicious humour which displays his passion and intrigue of the subject. This gem expresses Robin's love of the poetic and his deep connection to tradition and the Gods. I recommend you curl up under the duvet with a box of chocolates and devour this lovely little book. (Kristoffer Hughes, Head of Anglesey Druid Order, author of 'Natural Druidry')

Robin Herne is an educator, poet, story teller, poet, artist, dog-owner and Druid. He has written numerous articles for Pagan magazines and has appeared in television documentaries.

Lorna
5.0 out of 5 stars Invaluable resource for poets and polytheists
Reviewed in the United Kingdom on January 4, 2015
Verified Purchase
Robin Herne is a polytheist Druid based in Ipswich. 'Bard Song' provides an introduction to reading and writing honorific and seasonal poetry (in English) in mainly Welsh and Irish metres. This fulfils an important role in Brythonic and Gaelic polytheism, giving people like myself who have not yet mastered the language of their gods the tools and inspiration to compose poems based on Celtic metres. It also opens new and exciting vistas for future developments within poetry as a whole.

In his introduction Robin speaks of the Awen, the source of Bardic inspiration as `a wild spirit, a passionate and consuming Muse that imparts not just pretty turns of phrase, but a new vision of the world.' Poetry is a magical art which can be used to commune with and honour gods and ancestors, attain and express a spiritual vision, record history, praise (or deride) a person and for fun. Its ultimate purpose is re-enchantment.

The first four parts of the book are divided in accordance with the Gaelic festivals; Samhain, Imbolc, Beltaine and Lughnasadh. In each section Robin introduces the festival with associated myths, traditions, deities and suitable metres before sharing a selection of his poems, many of which have been used by his clan in ritual.

For Samhain, Robin introduces the forsundud, an Irish genealogical poem for the ancestors. We meet the Cailleach holding `cold vigil' in `The House of Winter' and rutting stags. `Gwynn's Guest,' one of my favourite poems of all time (written in Tawddgyrch cadwnog metre) records St Collen's encounter with the Welsh Fairy King on Glastonbury Tor, the first stanza capturing Gwynn's wild nature perfectly.

At Imbolc's core stands the hearth of Brigit. `Sisters of the Hearth' introduces her triple role as smith, healer and poet. `Brigit's Song' takes place in her Hall. Robin's words in `Three Flames' resonate most strongly with my personal experience of her as Brigantia, goddess of northern England and the fires of inspiration which consume and heal.

The section on Beltaine speaks of magical and military poetry. `Cu Chulainn at the Ford' provides a heart-wrenching representation of Cu Chulainn and Ferdiad's tragic battle in Ae Freisilighe metre. On a more cheerful note we find `The Honey-Tongued,' dedicated to Ogma `carpenter of song,' who is the patron god of Robin's Clan. Since its publication this poem has fittingly given its name to a new brand of mead.

Lughnasadh introduces the stories of Lugh and Tailtiu, recording Lugh's arrival `At Tara's Gates' and Tailtiu's death and `funereal commemoration.' It covers the story of Gobanos, a god of smithing and brewing and there is also discussion of famed cauldrons in Celtic mythology and the important role of select brews in the arts of inspiration.

I have mentioned only a small selection of poems and themes. In later chapters Robin shares poems devoted to Heathen, Greek and Roman gods and those written for fun. In the appendices he provides guidelines for writing in Irish and Welsh metres. These are clearly introduced with rhythmic and syllabic patterns with examples.

I have learnt vast amounts from this book about Celtic metres, composed some poems of my own in the Welsh ones and found it to be an excellent resource for use in Bardic workshops. Robin's dedication to the Old Gods shines throughout his work and this alone has inspired me on my path as an Awenydd and polytheist.

'Bard Song' is a must read for Bards, Fili and people of Celtic and other polytheistic religions. I'd also recommend it highly to all Pagans and to poets looking for new and exciting metres with origins in the British Isles.