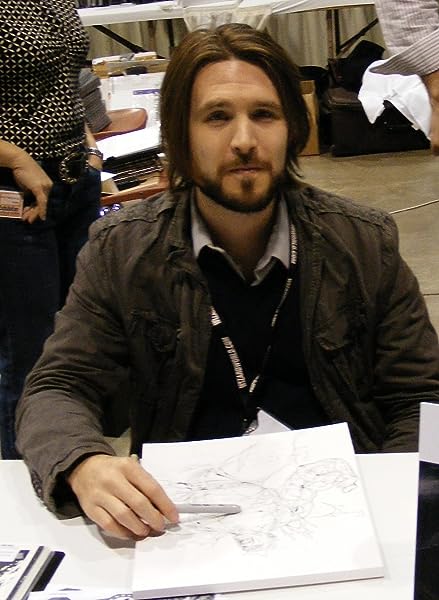 For a hero with no superpowers, Batman shows a remarkable resistance to market saturation, and here slips comfortably into the seemingly awkward fit of Dickens’ Christmas Carol. To be sure, the virtuoso art of Bermejo, who drew Brian Azzarello’s Joker (2008), helps as he not only portrays the physical world with jaw-dropping precision but also captures the metaphysical nature of his subject. You see every line and curve as streetlights glint off the molding of Batman’s cowl, even as you feel the harshness of the shadows he carries within him. You see the grime on Gotham’s streets, even as you feel the grime in its soul. In his first time out as scripter, Bermejo manages to plumb the parallels of Batman and Scrooge effectively enough and speaks in a strong narrative voice as Batman uses a small-time hood (the Bob Cratchit stand-in) as bait to hunt down the Joker. With the likes of Catwoman and Superman filling in for Christmas ghosts, Bermejo presents a piece of gritty urban action with some real Christmas heart, all wrapped up in some truly stunning visuals. --Jesse Karp

“Amazing. This book is a visual treat.”—The New York Times

“The caped crusader channels the gravelly paranoia of Frank Miller’s The Dark Knight Returns while a desperate father working for the Joker lends the story its moral weight and inevitable humanitarian payoff.”—Paste Magazine

“Absolutely exquisite… I'd be more than happy to add reading "Batman: Noel" and watching it to my yearly yuletide festivities.”—Yahoo! Movies

"Bermejo has simply created an instant classic with BATMAN NOEL that is larger than any holiday."—Ain’t It Cool News

“Surprising, new, gorgeous to look at, and also incredibly heartfelt. So you know, the perfect stocking stuffer.”—MTV GEEK

“[Bermejo]’s incorporating his unique style to create a fresh kind of Batman tale, lending it a distinctive flavor that would be impossible for any other artist to replicate.”—IGN

“More than a clever entertainment, and does more than just prove that Bermejo is a fine writer.” —The Morton Report

“Some artists like Bermejo seem to be regarded as having objectively beautiful illustrations. Bermejo is able to take characters we know and love and give them a sinister and realistic twist that makes them pop out of the pages. Batman Noel is worth picking up for the artwork alone."—Bloody_Disgusting.com, Pick of the Week

“Gives the classic story the dark edge that's inherent in anything set in Gotham City.”—Newsarama

Lee Bermejo began drawing comics in 1997 for WildStorm Studios in San Diego at age 19. He collaborated with acclaimed writer Brian Azzarello on the graphic novels JOKER, LUTHOR and BEFORE WATCHMEN: RORSCHACH, and worked with writer John Arcudi on the Superman feature in WEDNESDAY COMICS. He has also worked on HELLBLAZER with writer Mike Carey and GLOBAL FREQUENCY with writer Warren Ellis. He has written and illustrated The New York Times best-selling book BATMAN: NOEL, as well as the new Vertigo series SUICIDERS.
Read more