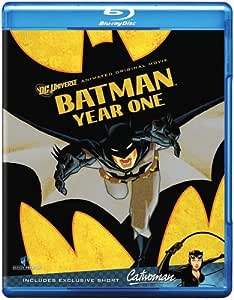 When Gotham City is in desperate need of heroes, two men take a stand for justice…but on opposite sides. Bruce Wayne returns home after years abroad to become a crimefighter, just as honest cop Lt. James Gordon moves to Gotham and finds corruption at every level. When Bruce becomes the masked vigilante Batman, the city explodes as his new nemesis Catwoman, the mob and Gordon all close in! Don’t miss this thrilling DC Universe Animated Original Movie based on the groundbreaking story by Frank Miller and featuring Bryan Cranston, Ben McKenzie, Katee Sackhoff, Eliza Dushku, Alex Rocco and Jon Polito in its stellar voice cast. Experience a bold and dynamic vision of the Dark Knight’s first year in action and the start of his enduring friendship with Jim Gordon.

DC Universe's original animated movie takes on one of the most acclaimed texts among Batman fans: Frank Miller's Year One, which retold the Dark Knight's origins as a crime fighter from a decidedly hard-boiled point of view. The feature follows Miller's story arc faithfully, with young Bruce Wayne (voiced by Benjamin McKenzie of Southland) arriving in a vice-ridden Gotham with a decade's worth of martial arts training and a head full of vengeance over his parents' murder. At the same time, new police transfer Jim Gordon (Bryan Cranston, Breaking Bad) settles into his job, where he discovers that the police are often worse than the criminals. What follows is an inversion of the traditional superhero story, with both men, ostensibly on the side of law and order, taking the business of saving Gotham into their own hands, with Gordon untangling the web of corruption around the city while Wayne, as Batman, adopts a more hands-on (read: violent pummeling) approach. The feature, codirected by Lauren Montgomery and Sam Liu (who previously shared helming duties on Justice League: Crisis on Two Earths), captures the visceral grit of Miller's take, but not the depth of character and story, which made the source material so rich. Exposition is delivered through cumbersome voice-over, while the plentiful action threatens to overwhelm the scant characterizations afforded by Tab Murphy's script. Casting is another mixed bag, with Cranston delivering Gordon's frustration and fury with skill, but McKenzie and Katee Sackhoff (as Sarah Essen, Gordon's lover and future wife) not quite striking the same balance. Striking the right combination of Miller's literary leanings in the original text with the visual elements required to keep an animated feature interesting is a formidable challenge, and one that the makers of Batman: Year One got only partially right.

Extras on the Blu-ray/DVD/digital copy set are typically plentiful, with featurettes and interviews giving an in-depth look into the origins and making of the film. Chief among these is the original short Catwoman, which pits the whip-wielding feline fatale (voiced by Eliza Dushku, who has a cameo in Year One) against a dangerous smuggler. As with its accompanying feature, the action is fast and frenetic, though scenes in a strip club make this definitely PG-13 material. Batman producer Michael Uslan is front and center for Conversations with DC Comics, which features the DC Entertainment team's thoughts on the Batman: Year One text and its long-reaching influences, while Heart of Vengeance looks at Miller's work and its impact on the comic marketplace. Liu, producer Alan Burnett, DC writer/editor Mike Carlin, and voice casting director Andrea Romano are featured on an info-heavy commentary track, while two episodes from Batman: The Animated Series, previews for previous releases, and a sneak peek at Justice League: Doom, the next feature from DCU, round out the sizable set. --Paul Gaita