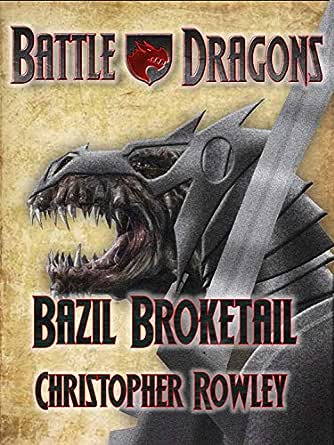 You've subscribed to The Bazil Broketail Series! We will preorder your items within 24 hours of when they become available. When new books are released, we'll charge your default payment method for the lowest price available during the pre-order period.
Update your device or payment method, cancel individual pre-orders or your subscription at
Your Memberships & Subscriptions
There was an error. We were unable to process your subscription due to an error. Please refresh and try again. 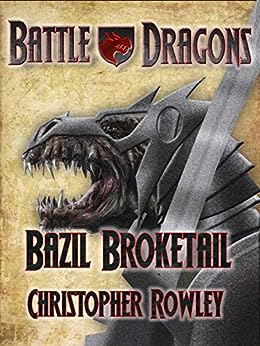 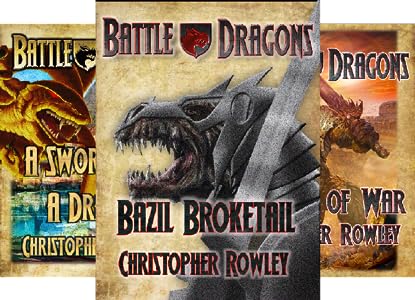 4.8 out of 5 stars
4.8 out of 5
39 global ratings
How are ratings calculated?
To calculate the overall star rating and percentage breakdown by star, we don’t use a simple average. Instead, our system considers things like how recent a review is and if the reviewer bought the item on Amazon. It also analyzes reviews to verify trustworthiness.

j walk
5.0 out of 5 stars A great intro to an amazing series
Reviewed in the United States on January 27, 2018
Verified Purchase
It can be daunting to start a new series because there is so much to learn and so many people and details to remember. The Broketail series disarms one from that initial insecurity by starting readers off with a young girl’s trivial social struggle. This allows the main characters, the city, and the political system to be introduced subtly.
Then the action starts, and Rowley does an excellent job of painting a vivid picture without using unecessary information or annoying levels detail. Battledragon combat is the most fun of any i’ve read in any genre (personal feeling).
Read more
Helpful
Comment Report abuse

Brian Hamer
4.0 out of 5 stars Four Stars
Reviewed in the United States on October 7, 2014
Verified Purchase
If you like magic and dragons, this book is for you. A unique take on dragons. A good read.
Read more
Helpful
Comment Report abuse

Bradley J. Schaaf -Tammie W. Schaaf
5.0 out of 5 stars Great book!
Reviewed in the United States on April 9, 2014
Verified Purchase
I lost my copy and have friends who wanted to read it. I am so glad you had a copy I could purchas! Thanks!!
Read more
Helpful
Comment Report abuse

Ellen Jankowski
5.0 out of 5 stars gift
Reviewed in the United States on February 25, 2014
Verified Purchase
well worth the time it took to get it here. the look on his face when he saw the book...priceless!
Read more
Helpful
Comment Report abuse

Anon
5.0 out of 5 stars Awesome
Reviewed in the United States on March 13, 2009
Are you sick of the same old literary failures which have come to define fantasy? Amazing heroes constantly brought low by some horribly unlikely, senseless, or completely retarded turn of events simply because without it there would be no plot? Terry Goodkind is the ultimate example of powerful protagonists constantly being turned into a pathetic weakling for 99% of each book before finally saving themselves.

It's pathetic, and frankly, I've come to hate it. Enter Bazil Broketail.

Bazil and Relkin are anything BUT pathetic. You won't find these two constantly running for their lives from overpowering forces that they should have easily defeated except for some dumb mistake they made. No no. Bazil is a two ton battle dragon who runs from no one (well, almost), sword champion of the Legion, and always ready for a fight. Relkin is his dragonboy (and much more, but lets not give everything away, shall we?) and the ultimate survivor. Together they lead the other members of the 109th dragon squad into one tight spot after another, usually saving one of Relkin's many female companions (his libido may be his most potent enemy) and defeating (that's right, defeating, not running and hiding from) countless powerful enemies and enemy forces as they struggle to defend Argonath against their almost godlike enemies and their hordes of evil minions. All the while readers will enjoy the unique brand of back and forth humor developed by the dragons, in their constant quest for more and more interesting food, and their boys who strive to keep them focused on the task at hand (and full).

Think of it as Lord of the Rings. Except, in addition to a bunch of hobbits and weakling humans, you have 10 giant dragons. There won't be any hiding under trees while the enemy passes for THESE heros. Even separated and alone in vast enemy kingdoms, Bazil and Relkin are never victims, and their enemies quickly learn to regret thinking them helpless simply because they are few in number.

So for anyone else, like me, who has gotten sick of reading 450 pages of filler in order to get to the last 50 pages where the hero actually acts heroic, give this series a go. It wont disappoint, I promise!
Read more
One person found this helpful
Helpful
Comment Report abuse

Eric J. Lee
5.0 out of 5 stars Nostalgic series of books.
Reviewed in the United States on August 16, 2020
I remember reading the entire series long ago, back when they were only in print. I patiently waited for each book to be published so I could continue with the adventure. Now I can buy the entire series again and not need to worry about losing them.
Read more
Helpful
Comment Report abuse

G. Long
2.0 out of 5 stars A totally one-sided book!
Reviewed in the United States on March 11, 2000
The story looked promising, the characters looked good...but the Bazil Broketail series failed to keep me interested for long. The stories are rediculously one-sided; evil never wins. A good story has evil "winning the battle, but losing the war." From the three books I have read, evil doesn't even win a battle! BORING! Plus, the story introduces characters and either kills them off a page later, or totally forgets about them! If the character isn't important, either leave him out entirely, or don't fully describe his name, age or job, otherwise the book gets confusing, as you woun't be able to tell who truly IS important. The politics of the book are confusing as well. Never have I seen so many legions and empires described in a series. I skipped over many sections of the book because they were so dull and/or confusing. Here's one more gripe: the lead characters are invincible. Incidents occur (mostly to the benefit of the main characters) that are totally unrealistic. In one novel, after killing a monster, Relkin (one of the main characters) reloads, aims, and fires a crossbow at another monster before it even had time to lift its arm to throw its spear. It take at LEAST 2.5 seconds to load a crossbow, which is more than enough time for the monster to throw it's spear! I gave the book 2 stars because the character development was okay, but other than that, I only recommend this book for the "read before bedtime" crowd, or insomniacs that need to sleep.
Read more
One person found this helpful
Helpful
Comment Report abuse
See all reviews

Pontus.b
5.0 out of 5 stars Five Stars
Reviewed in the United Kingdom on March 28, 2016
Verified Purchase
Looks good, if you like dragons and wanna break the stereotypes
Read more
Report abuse

brock
5.0 out of 5 stars APPROVING ADJECTIVE!
Reviewed in Canada on March 11, 2014
Verified Purchase
A great book, Don't let the poor cover art throw you off, this series is amazing, right up there with lord of the rings and game of thrones
Read more
Report abuse
See all reviews