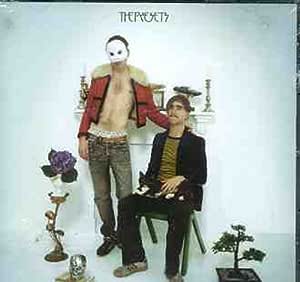 This is Sydney's The Presets (Julian Hamilton & Kim Moyes) full-length debut. Entitled Beams, the album is a collection of 12 tracks stirring the whole spectrum of emotions, from dark disturbed disco to blissful, cinematic instrumentals, with some straight up brilliant pop songs in the middle. Theirs is a sound that mixes dark dance with a sweaty rock sensibility that has paved the way for The Presets becoming one of Australia's most promising bands. 12 tracks. Modular. 2005.

Charles
5.0 out of 5 stars This CD is awesome!!
Reviewed in the United States on August 22, 2016
Verified Purchase
This CD is awesome!!! I don't care for much of their other material, but this CD is great, from beginning to end. Not so sure about the cover art...a bit bizarre and honestly, had I seen this at a CD store, I never would have picked it up, yet I'm glad I did!
Read more
Helpful
Comment Report abuse

Connor C. McKee
3.0 out of 5 stars It's... interesting...
Reviewed in the United States on June 25, 2010
Verified Purchase
I bought the Presets' second album (Apocalypso) a few months back and loved it. Every track got huge playcounts on my iPod and PC; the unique Depeche-Mode-goes-Dance style was incredible, and enough to make me a huge fan. Like any good fan boy I decided to go back and buy their first album... well, at least it was cheap :P To be honest, it's not awful; the production quality is low, it's repetitive, and half the tracks are instrumental (or whatever the electronic equivalent of that is), BUT it's catchy, has a good dark vibe to it, and gets in your head like you wouldn't believe (good luck not having "Are You The One" or "Girl (You Chew My Mind Up)" stuck in your head for hours. Still, it sounds like it was recorded in someone kitchen, and a lot of the tracks feel like they'd be entertaining for about a minute but drag on twice as long as necessary.
If the track samples blow you away, or if you're a fan/collector of The Presets, then you should buy this, otherwise I'd recommend steering clear (and buying Apocalypso if you don't already have it).

P. D. Schaffner
3.0 out of 5 stars Good CD
Reviewed in the United States on September 17, 2007
Verified Purchase
I expected more, even after listening to the preview tracks...

'Are You The One?' and 'Girl in the Sea' are great tracks, to me they're the saving grace of an otherwise forgettable album.

A lot of instrumentals that get a little repetitive, but better than a lot of other stuff out there. They do acheive some creative sequencing from time to time.

The Wasp
4.0 out of 5 stars Aussie Electro Weirdos Make Good
Reviewed in the United States on May 7, 2006
Finally it all makes sense. Like a pack of cards without an ace of spades, a jigsaw missing numerous pieces or a Monopoly board without a `Second Prize In A Beauty Contest' Community Chest card, The Presets' output to date has been like a nagging puzzle impossible to solve. Keeping their audience at a distance by releasing just two EPs since forming in 2003, the enigmatic nature of The Presets has worked both for and against the Sydney duo. Their weird imagery, ethereal New Wave EP Girl And The Sea and recent work with Australian rock maestros such as Daniel Johns and The Sleepy Jackson have all helped build the excitement about their debut LP, yet the flipside - having an insubstantial back catalogue - may have worked against them. Nonetheless, The Presets' meagre output of puzzling electronica has been buffed up, bolstered and blasted into hyperspace with their debut Beams, finally offering a complete look into The Presets mindset rather than the prior brief teases.

Current single Down Down Down has regimented bite, squelchy Worms sounds like a Bowie instrumental from the experimental Outside era and the eerie throb of Steamworks wouldn't have sounded out of place on the new Goldfrapp album. Even I Go Hard, I Go Home, amusingly described by Julian Hamilton as "mindless music written for mindless people", is a ravey slice of fun that sits neatly between the Add N To (X)-meets-Backstreet Boys sounds of Girl (You Chew My Mind Up) and the slipping beats and Xanax slur of Bad Up Your Betterness.

With Beams, The Presets enigma is finally solved. Julian and Kim Moyles have created an Australian electrorock experience that rivals last year's debut from Cut Copy, proving that you can never wear too many musical hats - or freaky masks, for that matter.
Read more
3 people found this helpful
Helpful
Comment Report abuse

Brian Cleaveland
4.0 out of 5 stars now for something completely diff er ent
Reviewed in the United States on February 5, 2007
I bought this CD after hearing just one song: Down Down Down.

Based on that track, one would envision an "electronic punk" band.

The CD starts off with a toe-tapping,

"B Movie theme" of a song in Steamworks,rolls into a true-rock sound with

Are You the One, and follows up with the dancy, Down Down Down.

Up next, we take a detour into the classic '80s sound of Girl and the Sea,

and an interlude into two instrumentals:Black Background(at 1:37 seconds long) and Worms .

While moody, I think the songs lack some depth in ambience that should define mood music.

Or maybe that's 'cause I can't wait for Kitty in the Middle of It to start ...

Hill Stuck(at 1:41 seconds in length) does porvide a nice ambience, right before

an off the wall track in Girl(You Chew My Mind Up). I Go Hard, I Go Home shows

a nice, dark techno side of the Presets,spiced up with some interesting vocal bits.

From here, we delve into an almost neo new-wave feel of Bad Up Your Betterness,

and cap the CD off with the surprising title song Beams.

Another instrumental,the track Beams is a cut above the other songs, and completely

out of place on this disk ! It's dreamy; with horns and a great ambience that leaves you

real talent. Not that I liked the song all that much...but that's cool .

In review, The Presets / Beams CD music is different than anything else in my collection ,

it defies any genre because of the diverse music tracks,and is well worth the price of admission..

live it, play it over and over again, get a feel for the Presets !
Read more
One person found this helpful
Helpful
Comment Report abuse
See all reviews

Mec
4.0 out of 5 stars Wonderfully refreshing.
Reviewed in the United Kingdom on October 8, 2011
Verified Purchase
This is excellent to listen to.

If you like electronica with a hint of indy, this is for you.

I actually found them on the "Driver SF" PS3 game as one of the songs you can select. "Steamroom".
Read more
Report abuse