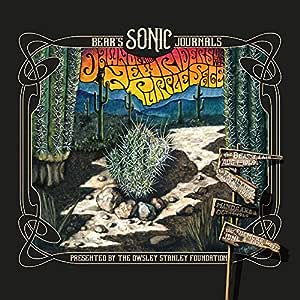 Bear's Sonic Journals: Dawn of the New Riders of the Purple Sage

4.4 out of 5 stars
4.4 out of 5
25 customer ratings
How does Amazon calculate star ratings?
Amazon calculates a product’s star ratings based on a machine learned model instead of a raw data average. The model takes into account factors including the age of a rating, whether the ratings are from verified purchasers, and factors that establish reviewer trustworthiness.
Top Reviews

Stuart JeffersonTop Contributor: The Beatles
TOP 500 REVIEWER
5.0 out of 5 stars A TROVE OF LIVE NRPS FROM THE EARLY DAYS.
Reviewed in the United States on January 17, 2020
Verified Purchase
"The myth of the West has drawn in drifters and dreamers for centuries. The New Riders of the Purple Sage added a musical dose to that ethos, and you can now take a ride along their earliest terrain." Rob Bleetstein, NRPS archivist.

"We were definitely psychedelicized." David Nelson.

"It seemed that all of the elements that made it possible for acid to do what it did were assembled." Marmaduke.

What a treat for NRPS fans. Officially released live sets from the formative period of the band when Garcia was playing with them on pedal steel. Over five hours of music from '69-'70 from four venues across nine nights. Included are a number of tracks never officially released, some with Bob Weir, and a couple with Will Scarlett-harmonica, who also played on the first Hot Tuna acoustic live album. The band is Garcia-pedal steel guitar/vocals, John "Marmaduke" Dawson-vocals/guitar, David Nelson-lead guitar/vocals, Dave Torbert or Bob Mathews-bass, and Mickey Hart-drums. Five "stars" for having Garcia and Hart in the band plus a slight bit of nostalgia on my part for the good 'ol days. But in the end its the music that matters and for NRPS fans this box set delivers.

The music is in "Chapters"--discs 1 and 2 are from the Bear's Lair in Berkeley in '69. Good tunes include "What's Made Milwaukee Famous", "Delilah", "Hello Trouble", "Last Lonely Eagle" from the first set. Set two includes nice things like "Kaw-Liga", "Sweet Lovin' One", "Long Black Limousine", and "Truck Drivin' Man".

Chapter 3 is from the Family Dog in Aug. '69 with Weir on guitar and vocals on several songs. plus four tunes from the next nights show. Chapter 4 is from Mandrake's in Berkeley on Oct. '69. Songs include more good performances like "Fair Chance To Know", "I Still Miss Someone", "The Weight", plus three tracks from another night including "Long Black Veil" and "Death And Destruction" with Will Scarlett. Chapter 5 is from a stand at Fillmore West in June '70. Another good show with songs like "Fair Chance To Know", "The Race Is On", plus three tracks with Weir.

The sound, from original tapes, is what you expect from Owsley Stanley--clean and open with a good period crispness. The mix for each show is slightly different, with the vocals and instruments noticeably mixed a bit differently from other shows. The tune "To Have The Hurting End" has a fluctuation in the volume level and the P.A. system is occasionally a bit wonky, but nothing to worry about. At Mandrake's there's a bit of mic bumping (Stanley moving mics?). The Fillmore West tracks also have some noticeable volume adjustments and a few sonic blips in the tapes--but it is what it is--I'd rather have this music warts and all than not. But these shows are more proof of how good a recording engineer Stanley was--you can easily hear the band come together and become tighter as you listen to these shows--a testament to both the musicians and Stanley--who is heard on the Family Dog tapes telling Garcia the pedal steel is really loud.

Transfers and restoration were done using the Plangent Process. Everything was mastered by Jeffrey Norman who does work for the live Dead releases among other things. There's a 16 page booklet with relatively rare photos plus an essay taken from recent interviews with David Nelson and Bob Weir and some nice b&w photos from that era. Each individual disc snaps into a tray in it's own wallet-style cardboard package except Discs 1 and 2 which is a double CD package. Each package has a song list and date of recording on the back cover. Everything fits into a fairly flimsy cardboard slipcase which also has a track list on the back cover. Similar to earlier live Dead releases (like the "Road Trips" releases) there's a disclaimer at the bottom of the back cover about the sound not being perfect.

For fans of NRPS from the early days, this box set is worth adding to your shelf of live NRPS. I had the pleasure of hearing the embryonic band on two or three occasions during this period as a college student and came away a convert of the band's good time/cosmic cowboy music. This set brings back memories of those good days. All through these shows you hear Garcia's cosmic, organic, sweet sound on the pedal steel. But if you weren't lucky enough to have been around back then, this set will give you a good idea of what it was like. Still as relaxing and nice to hear as watching the sun sink into the ocean.

J. Nichols
5.0 out of 5 stars A Long Awaited Treasure Trove of New Riders
Reviewed in the United States on January 21, 2020
Verified Purchase
This release is a dream come true for me.
I really like Garcia on pedal steel.
Marmaduke had that special voice and hearing this early stuff is great.
I’m also glad that Owsley’s tapes are getting digitalized and think they are doing a good job with that.

I once heard that Jerry wasn’t happy with his pedal steel playing but I am moved by it.
Listen to this with your morning coffee and enjoy and don’t write a review until you give it a good listen.
Read more
5 people found this helpful
Helpful
Comment Report abuse

Amazon Customer
1.0 out of 5 stars Psychedelia Meets Ineptitude
Reviewed in the United States on February 14, 2020
Verified Purchase
Agree wholeheartedly with Mr. Seachrist’s review. I listen to a lot of music and do my best to find redeeming qualities, but Discs 1-4 are remarkable for their mediocrity and ineptitude. Mickey Hart was absolutely lost on these sets, and Garcia’s pedal steel overpowered the soundscape. Bob Weir brought some badly needed fresh air to some of the cuts. Disc 5 reveals some slight improvements in musicianship and recording and the garage band version of Honky Tonk Woman is interesting but overall this package Is just atrocious.

I bought this primarily because of recent “sonic journals” released by the Owsley Stanley Foundation. The Allman Brothers and Jorma Kaukonen/Jack Casady albums are excellent. This is an absolute stinker!
Read more
5 people found this helpful
Helpful
Comment Report abuse

charley
5.0 out of 5 stars good music
Reviewed in the United States on January 21, 2020
Verified Purchase
I been A dead head a long time I knew the New riders were there warm up band saw them a lot with the dead and with out just good music
Read more
One person found this helpful
Helpful
Comment Report abuse

Eugene Groesbeck
5.0 out of 5 stars A glimpse into the roots of the NRPS
Reviewed in the United States on February 15, 2020
Verified Purchase
These recordings are a treasure trove for fans of the New Riders. It's great to hear these previously unreleased concerts by this early edition of them with Jerry Garcia on pedal steel guitar and Mickey Hart on drums. Bob Weir sits in on some songs too.
Read more
Helpful
Comment Report abuse

Amazon Customer
5.0 out of 5 stars Bears Sonic Journey New Riders CD is great!
Reviewed in the United States on February 17, 2020
Verified Purchase
I have all of Bears current Sonic Journey cds. Love the clarity and ability to hear some of these artists back in the day. Pricey but nice.
Read more
Helpful
Comment Report abuse

weve
4.0 out of 5 stars Bear does it again.
Reviewed in the United States on March 9, 2020
Verified Purchase
Excellent clean and clear sound from Bear. A nice progression of very early music from New Riders. Enjoying this release.
Read more
Helpful
Comment Report abuse

Amazon Customer
5.0 out of 5 stars White lightning!!!!!
Reviewed in the United States on February 3, 2020
Verified Purchase
Owsley recordings are like the performance is right in living room. He was the master of his realm and made some damn good dose
Read more
Helpful
Comment Report abuse
See all reviews from the United States