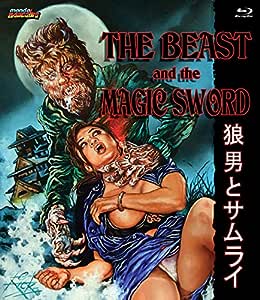 The Beast and the Magic Sword [Blu-ray]

Werewolf versus Samurai in a Battle to the Death!

THE BEAST AND THE MAGIC SWORD is the last great film from Spanish horror legend Paul Naschy. Although he would go on making and planning films until his death in 2009, he never again attempted the epic sweep and grandeur of this 10th entry into the saga of Waldemar Daninsky, a man afflicted by the curse of lycanthropy.

In this film we get for the first time an origin story of how the Daninsky curse began back in the 10th century. We then move forward to 16th century Japan where Daninsky has travelled in search of a cure to his affliction. Co-starring Japanese stage and screen veteran Shigeru Amachi, and shot in the studios of Toshiro Mifune, THE BEAST AND THE MAGIC SWORD is a highly successful and colourful melding of European werewolf legends and dark Japanese fantasy. It features a fight between werewolf and tiger, an evil scarlet-cloaked witch who imprisons Daninsky, a sword fight with a troupe of ghost samurai, and many other unforgettable scenes.

This is the first Blu-ray release of this film and its first ever US release and includes both a full frame version and a widescreen version.

It's one of the most impressive and entertaining Naschy flicks I've ever clapped my eyeballs on. --mmmmmovies.blogspot.com

Well produced in authentic castle and Japanese settings (the film) looks like a million pesetas. --Brian Senn - The Werewolf Filmography

4.2 out of 5 stars
4.2 out of 5
25 customer ratings
How does Amazon calculate star ratings?
Amazon calculates a product’s star ratings based on a machine learned model instead of a raw data average. The model takes into account factors including the age of a rating, whether the ratings are from verified purchasers, and factors that establish reviewer trustworthiness.

charles g
5.0 out of 5 stars Werewolf Of Japan
Reviewed in the United States on March 9, 2020
Verified Purchase
There is a lot to like about the movie- great werewolf face and performance, lots of good characters, some key scenes, and for me the Japan setting is great flavor. The blu ray image may be one of those best source available things, some shots crystal clear, some not in focus. It wasn't too distracting, and may be more in the first part of the movie, I don't know, but at times it was noticeable. The disc offers two options for ratio, I don't know if one has better image. An expert review would be helpful. Overall I'd say this is a must have for fans of Naschy, and might grow on newbies and those without digital bias. So far my favorite Naschy film is Devil Incarnate, I have many more to watch. I think this one will be in my top five.
Read more
One person found this helpful
Helpful
Comment Report abuse

D
3.0 out of 5 stars Love the Release, the Photoshopping Not so Much
Reviewed in the United States on March 21, 2020
Verified Purchase
I can appreciate Mondo Macabro releasing obscure horror and cult films, but the cover displayed on the product page does not match what you'll receive. The cover received has a really noticeable and rather annoying error on it. Check out the woman's wrist.
When reaching out to their customer support asking if they have a correction the response I received was a monosyllabic "nope." So then what happened to the artwork they're using for their product pages?

Michael Ashley
3.0 out of 5 stars It's ok
Reviewed in the United States on April 26, 2020
Verified Purchase
It's Spanish dubbed in English. Even for low budget horror, it's bad. It tries to be a old samurai film mixed with a werewolf film. The blend didn't go well this time.
Read more
Helpful
Comment Report abuse

B&S About Movies
TOP 1000 REVIEWER
5.0 out of 5 stars A must-have!
Reviewed in the United States on March 26, 2020
The tenth adventure of Count Waldemar Daninsky — played as always by Paul Naschy — this Spanish/ Japanese co-production was never theatrically shown in any country other than its native Spain. It was never dubbed in English, never released on VHS or even DVD. Now, Mondo Macabro comes to the rescue with a gorgeous blu ray release of a movie that defies any logic and makes me fall in love with werewolf movies all over again.

What do you need to know? Well, Waldemar Daninsky goes to Japan in the hopes of being cured of his lycanthropy. You may wonder, “Why is this movie in the past instead of modern times like most of the other Paul Naschy werewolf movies?”

Stop asking questions and buckle up.

For the first time, you will learn how the Daninsky curse began, way back in the 10th century. Yes, a witch busts in and screams, “All the seventh-born sons will be transformed into beasts! The Daninskys will be a race of murderers! Hated and persecuted FOREVER!” before taking a wolf skull and biting the baby Daninsky through his pregnant mother’s stomach. Centuries later, that baby has grown up and searched the world looking for a cure before coming to Japan.

There, in the studios of Toshiro Mifune, he will battle a samurai played by Japanese actor Shigeru Amachi, as well as a tiger, a witch, ninja and ghost samurai.

How could something this magical happen? Well, Naschy was paid by some Japanese investors to make a series of documentaries on the history of Spain. They also paid for two films — Human Beasts and this movie.

I wish they had given him enough yen to make twenty of these movies.

This first-ever U.S. release is awesome, with a brand new 4K restoration from the original negative, an archival intro by Naschy, a documentary about his werewolf films, new audio commentary by Rod Barnett and Troy Guinn of The Naschycast and a New interview with Gavin Baddeley, author of the book The Frightfest Guide to Werewolf Movies.