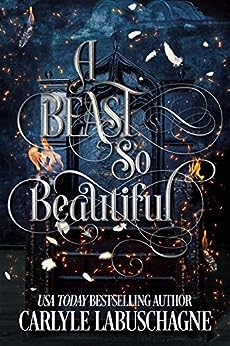 A Beast so Beautiful Kindle Edition

3.8 out of 5 stars
3.8 out of 5
35 global ratings
How are ratings calculated?
To calculate the overall star rating and percentage breakdown by star, we don’t use a simple average. Instead, our system considers things like how recent a review is and if the reviewer bought the item on Amazon. It also analyzes reviews to verify trustworthiness.
Top reviews

Shayay19
3.0 out of 5 stars Interesting ideas, but not my favorite
Reviewed in the United States on July 5, 2021
Some interesting ideas, but I had a hard time connecting with the writing style; not a huge fan of third person and things flow a bit weird. Overly descriptive at times, which makes the story slow moving, but as the story progressed, the writing style grew on me a bit.

Young Prince Leif has a beast side that has caused him issues in his life; his father, the king, treats Leif horribly, Leif’s father is a gross man. Leif is dealing with his beast side, his horrible father, his love for Avelyn, and Leif’s father isn’t the only one tainting the kingdom. This story starts when Leif is a teenager, around 15/16 years old, so Leif doesn’t exactly have the life experience to figure out deceptions; he’s easily led astray. This story is mainly told in Leif’s POV; he’s an okay character, but he does some disappointing things. He was dealing with quite the unique situation, so he gets a little leeway. I still would’ve liked to see more of a positive growth for him.

This is a fairly depressing story, so I didn’t really enjoy reading it, but some of the ideas were cool, so I was entertained. Overall, I ended up liking the story, but not loving it. The ending did work for this story; the epilogue made me think there is or is going to be more books dealing with these characters, so this one would be the prequel to those. I’d be interested to see how this story unfolds.
Read more
One person found this helpful
Helpful
Report abuse

Beba
3.0 out of 5 stars Well written but complicated
Reviewed in the United States on April 25, 2021
As a South African, I was intrigued to read a fantasy novel by a fellow South African. I found the book exceptionally well written and very descriptive. A young prince is held responsible for his mother's death by his father and locked away for 10 years. The king falls to every debauchery possible and can barely contain his contempt for his son. Prince Leif is horrified at his father's behavior but because of his own secret, he is loath to do anything about it or his inner beast will be unleashed, literally. When Leif realises the deception and meddling of his birth and his mother's death, by the hand of the one he thought was his love, his disdain knows no end. It was an interesting plot, but if I'm honest with myself, I was a bit confused. There were too many things that didn't quite add up and no real explanation of why and I found it too complicated so it didn't really flow. I found the beginning and the end of the book more compelling, especially the ending, which I was totally unprepared for and which was totally unexpected. As I said at the start, well written but I couldn't help being frustrated by the back and forth

Merrit Townsend
3.0 out of 5 stars Interesting story!
Reviewed in the United States on July 3, 2021
I received an advanced review copy for free and I am leaving this review voluntarily.

This book is all about magic and adventure and follows Leif who is the Crown Prince. Leif is part beast. He was caged by his father the king in the palace dungeon at he age of 10 after his mother died. After turning 16 Leif is released from the prison and sent on a mission with his father where he discovers what he is. The book follows his journey through trials and tribulations to try and win his fathers love.

The story has a small amount of romance but it does not take over the main theme. I found that the plot at times felt disjointed and I had a hard time keeping with the flow of the story. A few times I had to put down the book to give it a rest. I did like the magic system and descriptions throughout the book and I could see them in my mind as continued the book. I thought the cover was beautiful and eye catching. If I saw it in the store, I would pick it up and check it out. Overall the story was interesting and adventurous but I did have a hard time finishing some chapters. Overall I give this book 3.5 stars
Read more
Helpful
Report abuse

Tammy Hall
5.0 out of 5 stars Hope Blooms
Reviewed in the United States on June 8, 2021
A Beast So Beautiful is a twisted slightly dark story guaranteed to leave you with the feeling of a fast track roller coaster ride. The characters seem to pull you in to their reality. Prince Leif is put into a tower and is never to be released being blamed for the death of his mother. When Leif starts getting secret visits from Avelyn and hope blooms. Avelyn finds a way to visit everyday without fail this is where more that hope blooms and hearts are reveled. As the story continues secrets are reviled and this could bring it all down destroying everything. Could Prince Leif the answer Ruith needs?
I felt my heart wanting to allow hope to Leif and to help him. I devoured this story! A Beast so Beautiful is an amazing book. I want more.!
Read more
Helpful
Report abuse

Victoria Zumbrum
3.0 out of 5 stars A Beauty and the Beast Retelling
Reviewed in the United States on May 31, 2021
A BEAST SO BEAUTIFUL IS A DARK TWISTED RETELLING OF BEAUTY AND THE BEAST. I WAS DRAWN INTO THE STORY FROM THE VERY FIRST PAGE AS I FOLLOW THE STORY OF A YOUNG PRINCE WHO IS BLAMED FOR THE DEATH OF HIS MOTHER BY HIS FATHER. HIS FATHER KEEPS THE PRINCE IN A TOWER WHERE A YOUNG GIRL VISITS HIM EVERY DAY. THE STORY IS DEFINITELY YOUNIQUE AND I HAVEN'T READ ANYTHING LIKE IT BEFORE. THE STORY IS FILLED WITH INTRIGUE AND SUSPENSE AND I ENJOYED WATCHING ALL THE CHARACTERS DEVELOP. I WAS ABLE TO FOLLOW THE STORY UNTIL THE END WHICH DIDN'T MAKE ANY SENSE TO ME AND NOT WHAT I EXPECTED. I ENJOY THE AUTHOR'S WRITING BUT THE ENDING RUINED THE BOOK FOR ME. I WOULD BE INTERESTED IN READING MORE BOOKS BY THIS AUTHOR. I LOVE HER WRITING.
Read more
Helpful
Report abuse

Sam
3.0 out of 5 stars Interesting Story
Reviewed in the United States on May 2, 2021
This was an interesting story. Full of mystery, the supernatural and intrigue. I wanted to keep reading to figure out all the mysteries in this new world. The writing style is both beautiful and a little confusing, though. The descriptions are very well portrayed and there are some really unique qualities to this book. However the flow was not as smooth as it could have been. Overall this book was new and refreshing with an interesting plot and beautiful writing.