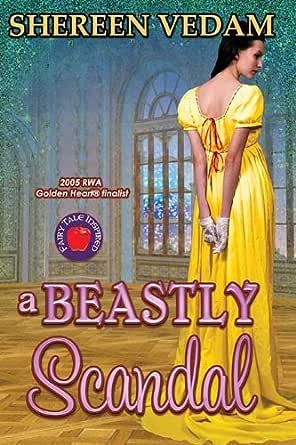 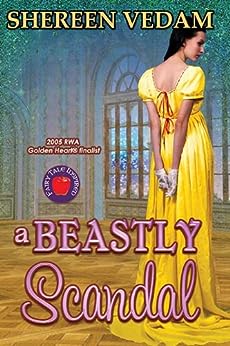 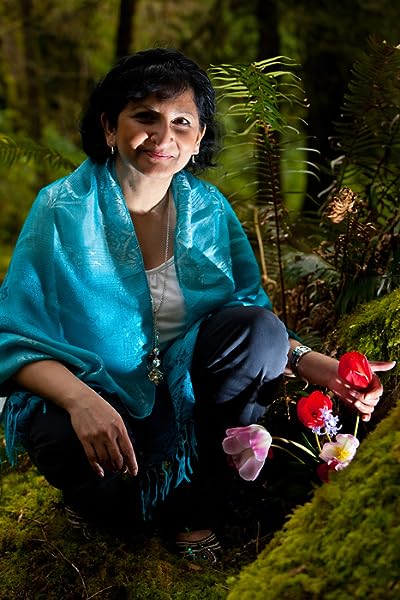 Nominated for 2014 RONE award by Ind'tale Magazine in mystery category.
"A lovely regency taleby Shereen Vedam! Picking up this book, a reader gets an interestingrendition of Beauty and the Beast, with sparkling characters, lots offamily drama, humor, a mystery and ghosts!" - Ind'tale Magazine (Mimi Smith)

"WOW! I was blown away as soon as I started reading A Beastly Scandal. - BlackLilacKitty (Cynthia Harris)

"Guaranteed to please even the staunchest of Beauty and the Beast fans out there. - Once upon a Book

"I laughed a lot, wanted to cry a few times." - Celestial Reviews

"I really, truly enjoyed it and it was such a fresh take on regency romance novels. - Lunar Haven Reviews & Design

"I look forward to reading more by this author as she showed great promise in this book's storytelling." - Words of Wisdom...From The Scarf Princess

Shereen Vedam writes heartwarming historical romances that have a healthy dollop of mystery with a pinch of magic.

She wanted to tell him that all she wanted to do was help his mother, but she knew he would not listen. "What possible harm could I mean to you or your family?"

"What harm do women always mean?"

She stared at him, confused. Before she could fathom his words, he pulled her closer with a firm hand on her back.

Mirroring her conflicted emotions, Earnest whined, then growled, and then whined again.

The shock of contact left Belle breathless. She stood with her palms pressed against his chest, a traitorous enjoyment creeping from her toes to her hairline. His hold forced her limbs against his hard legs. The heat of his breath brushed intimately against her mouth.

She knew she should give him a severe set-down, but all she wanted was to see his angry gaze melt with desire. Why would he not end her torment and kiss her? Mortified by that improper thought, Belle leaned away, but the dog was plastered against the backs of her knees. Some watchdog. She shoved him back, but Lord Terrance held her in place, as if to assert his mastery. To prove she was being released, not pulling away.

"How . . . how dare you, sir." The protest came far too late and sounded abysmally weak. In her mind, she heard Mrs. Jones say, A proper young lady would be overcome by the experience.

"I am a lady." She cursed her breathy voice, no longer certain the statement was even true. Did ladies dream of being ravished? "I am not a . . ."

"A Cyprian?" The word was a caress.

She should not know what that meant, but she had heard the word whispered as another form of harlot, a mistress, an illicit lover. "I have no idea what that means."

The tips of her ears singed with guilty heat even as he laughed with patent disbelief. --This text refers to the paperback edition.

4.3 out of 5 stars
4.3 out of 5
49 global ratings
How are ratings calculated?
To calculate the overall star rating and percentage breakdown by star, we don’t use a simple average. Instead, our system considers things like how recent a review is and if the reviewer bought the item on Amazon. It also analyzes reviews to verify trustworthiness.

MikiHope
5.0 out of 5 stars This novel kept me reading and I have to say I was shocked at who the murderer really was!
Reviewed in the United States on February 7, 2019
Verified Purchase
Women with psychic powers? Not in England--not in the regency period. But Annabelle Marchant has certain powers and was not about to give them up--even if it meant living her life without a husband and children. No man back then would countenance that!

When she was asked by the Countess of Marlesbury to please come to their estate and rid the castle of the ghost that was haunting it--how could she refuse--especially since this woman was known to her grandfather and he wanted her to go,

Rufus Marlesbury, the Earl of Terrance,the son of the countess is being accused of his father's murder--he has to prove himself innocent. He kicks Anabelle out-but his mother intervenes. He makes her promise she will never speak of ghosts to any of his family members.

She does find the ghost--a very angry one at that--will she be able to calm this ghost down and find out why he is still hanging around--will the Earl be able to clear his name? Will he ever be able to stop saving Annabelle--who generally is a castastrophe waiting to happen.

This novel kept me reading and I have to say I was shocked at who the murderer really was!

Jolyn
2.0 out of 5 stars Too heavy on the scandalous part of this romance for me
Reviewed in the United States on November 14, 2019
Verified Purchase
I was expecting a fairy tale retelling of Beauty and the Beast with some ghosts thrown in for a twist. Unfortunately I didn't realize the scandal in the title didn't just refer to a murder scandal. If I had realized the sexual scandal/innuendo that was included in the story, I wouldn't have started it. No one goes to bed together in the story but they do in their fantasies and kisses are so intense that cold showers are required and binding of private parts to hide further arousal.

Cecilia Rodriguez
3.0 out of 5 stars Gothic Beauty and the Beast
Reviewed in the United States on May 11, 2020
Verified Purchase
Vedam sets her story in 1812 Cheshire England, at Clearview manor.
While there are some elements from the trope of Beauty and the Beast; Verdam's romance is primarily a Gothic style mystery, complete with a vengeful ghost.

Amazon Customer
5.0 out of 5 stars Excellent.
Reviewed in the United States on February 5, 2019
Verified Purchase
Well written and with interesting characters.
The dog is very loyal to both the hero and the heroine . I would definitely love this to be just a beginning to a series.

P. Bothwell
4.0 out of 5 stars Clever!
Reviewed in the United States on March 22, 2014
Verified Purchase
How clever! I was a little skeptical that a Regency telling of Beauty and the Beast set with haunting ghosts would be "just the thing," but this was a pleasant surprise. There was a lot of flirty innuendo, between the h and H, but nothing cringe-worthy; so it was a clean romance. The heroine was supremely confident and self-assured, even if it meant her being ostracized from society. I recommend, especially for B&theBeast lovers.
Read more
2 people found this helpful
Helpful
Comment Report abuse

Linda S. Andrews
4.0 out of 5 stars Fun Read
Reviewed in the United States on April 15, 2016
Verified Purchase
I loved this take on the fairy tale Beauty and the Beast. Belle is someone to root for and the beast has a few lessons to learn, he kinda reminded me of Mr. Darcy with his puffed up pride. I enjoyed the display of Belle's abilities and the supporting characters. The mystery was a little obvious but didn't detract from the romance.
Read more
Helpful
Comment Report abuse

Donna
5.0 out of 5 stars Good read
Reviewed in the United States on May 30, 2018
Verified Purchase
I liked the ghost story plus the mystery plus the romance it had some of all that I liked.Thank you.I could not put down stayed up until morning to finish .
Read more
Helpful
Comment Report abuse

Kindle CustomerLouise Sorensen
5.0 out of 5 stars A Beastly Scandal, A Review
Reviewed in the United States on January 8, 2014
Verified Purchase
This was a beautifully written Victorian type novel. The characters were well developed, lovable and memorable. I enjoyed the story, which had an element of paranormal. Highly recommend for people who enjoy this type of story.
I give it a well deserved 5 stars and will check out the other books by this author.

Winnie Robinson
4.0 out of 5 stars Good read . .
Reviewed in Canada on February 14, 2019
Verified Purchase
It was a pretty good story . . I enjoyed the characters, the ghost element. . the dog! Not a 5 star read for me . . but I would try another of her books. I am intrigued to know his cousin's story . . .
Read more
Report abuse

Smartcat
5.0 out of 5 stars A lovely read
Reviewed in Australia on February 22, 2019
Verified Purchase
I like this book. The relationships took place above the mystery and were very well developed. The heroes vulnerabilities were believable and the love story left me with the warm fuzzies.
Read more
Report abuse

J. Read
5.0 out of 5 stars A new take on the classic Beauty and the Beast tale
Reviewed in Canada on May 9, 2013
Verified Purchase
A Beastly Scandal is a highly polished read full of beautiful prose that follows the tumultuous encounter of a beautiful lady and a beastly but redeemable lord. Loved Clearview Manor and its spooky ghost!
Read more
Report abuse
See all reviews