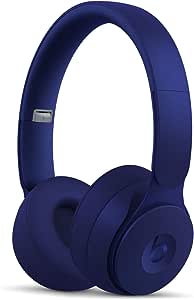 Get inspired with Solo Pro Wireless Bluetooth noise cancelling headphones in black. To deliver sound how you want it, solo Pro features two listening modes: Active noise cancelling (ANC) and transparency. Beats’ pure ANC gives you the space to create with fully immersive sound, while transparency helps you stay aware of your surroundings. Every detail of Solo Pro has been carefully considered, right down to the intuitive way the headphones turn on and off via folding. The ergonomic design delivers exceptional comfort for extended wear and sleek style. And with up to 22 hours of battery life (up to 40 with Noise Cancelling and Transparency off), you can keep the music going no matter where your day takes you.

Compatible with Apple iOS and Android devices
Beats Solo Pro features the Apple H1 headphone chip, delivering a faster and more stable wireless connection to your device for extended range and fewer dropouts. The Apple H1 headphone chip is the same chipset leveraged in Apple Airpod Pros.
Hands-free controls via “Hey Siri” on iOS devices, and voice capability with the push of the b button on a variety of compatible devices
Advanced acoustics deliver powerful sound with balanced tonality
Up to 22 hours of listening time (up to 40 hours with Noise Cancelling and Transparency turned off)
Intuitively designed to power on and off when you unfold and fold them


What’s in the box

4.7 out of 5 stars
4.7 out of 5
3,624 global ratings
How are ratings calculated?
To calculate the overall star rating and percentage breakdown by star, we don’t use a simple average. Instead, our system considers things like how recent a review is and if the reviewer bought the item on Amazon. It also analyzes reviews to verify trustworthiness.

Nero
1.0 out of 5 stars Keep these flop headphones.
Reviewed in the United States on November 2, 2019
Color: Dark BlueVerified Purchase
They don’t even sound as good as the solo 3s do. I dunno what Apple was thinking but if they think that I’m gonna spend an extra 50 bucks for an audio cable for a pair of on ear headphones that doesn’t even have decent sound they have another thing coming. Not only that the anc that they’re going for isn’t even as good as the anc on the beats studio 3s! And you’d think for the money you’re spending they would give you a hard shell carrying case for these! You can keep these flop cans. Imma stick with the beats studio 3s until you guys rectify the mistake.
Read more
114 people found this helpful
Helpful
Report abuse

JTK Awesome
4.0 out of 5 stars Over-ear AirPod Pro's
Reviewed in the United States on January 29, 2020
Color: RedVerified Purchase
I’ve come to depend on what Apple’s H1 chips do for iOS devices: easy pairing, settings built into iOS, “hey Siri,” iMessages read out. When my AirPod Pro’s bit the dust for the 3rd time (I’m not the only one, checkout Macrumors’ forums for the now 24-page thread on the Fit Test failing), these Beats were the next choice for me, since the PowerBeats Pro’s don’t have ANC.

First, they sound great. Forget what Beats were like before Apple. These have a similar sound to Homepods and AirPod Pro’s: warm, clear but not shrill, with a little extra punch to the bass. I returned a set of Bose 700’s for these, which sounded muddy and dull in comparison (no highs, no lows, it must be Bose).

Second, they fit well. I have a medium-large head and these fit me comfortably. They are snug to be sure, but the only discomfort comes from wearing sunglasses with these, which is mild. I wear them for my 1-hour commute without issue, and even wear them in the office when I need to shut out the din.

Third, the ANC works well. These aren’t Bose-level ANC but it still easily handles the din of the city and the rumble of the bus. And I much prefer Apple’s to Bose’s approach here: a simple 3-way toggle between ANC, Transparency (which works great), and off.

Finally, the controls are great. Stealthy *physical* buttons (none of that touch surface crap) to easily control calls, music, volume, and ANC. On/off via folding to put in the case is a nice touch.

Where these lose a star:
- The controls are under one plasticky “Beats” logo panel, so track controls can be little fiddly.
- The wind noise in the earcups is a little much when walking around outside on a windy day.
- The carrying case is functional but underwhelming.

John Dominic Fajardo
1.0 out of 5 stars Received a used item.
Reviewed in the United States on May 12, 2020
Color: RedVerified Purchase
I received an item that has been clearly used. I was so excited to try these put and I'm very disappointed with what I received.
Read more

1.0 out of 5 stars Received a used item.
By John Dominic Fajardo on May 12, 2020
I received an item that has been clearly used. I was so excited to try these put and I'm very disappointed with what I received.
Images in this review

Mike Thompson
5.0 out of 5 stars Nice headphones
Reviewed in the United States on October 31, 2019
Color: Light BlueVerified Purchase
Earpads very soft. Band is not as tight as I expected - I consider my head shape and size to be very average (for a male) - mostly square, not wide. I think I could easily wear these for a long time.

ANC is on par with Bose QC35ii. Not as good as Sony XM3, but that’s not really why you buy these headphones. These are out and about headphones — not lounging around headphones. ANC should be more than enough to drown out the gym noises.

Sound quality is on par with any other headphone in this price range. Very good, well balanced.

Alan Hardman
2.0 out of 5 stars Great build quality, good sound, too painful.
Reviewed in the United States on December 23, 2019
Color: Light BlueVerified Purchase
The convenience of the iOS integration is great, and I love how they look, and the overall audio quality is fantastic for Bluetooth. The low end is incredibly flat outside of cases of extreme bass, really limiting the experience for most of the music I listen too, which seems funny since that's sort of the opposite of what Beats is known for. They're not very comfortable either, definitely too tight on my ears after even fairly short sessions.

If these were $60, I'd consider them great, but for $300, they really don't live up to the expectation. I haven't yet decided if I like them enough to keep them, but I wouldn't really recommend them over something even as cheap as the Sony XB-400s since the sound quality is on a somewhat similar level, and the bass, comfort, and passive noise isolation on the XB-400s are all much better. The active noise cancellation and "Transparency" on Solo Pro are nice, but... probably not worth it on these ones.

I'm most likely returning these primarily on the comfort issues. If I position them *just right* I can handle wearing them for about two hours, but that's it. They're just too painful to wear compared to everything else I own, and with the Bose QuietComfort 35 II being similarly priced, these just don't make much sense to me.

Chris C.
5.0 out of 5 stars If you love AirPods Pro you will love these
Reviewed in the United States on February 8, 2020
Color: Dark BlueVerified Purchase
I just got them and I love them. I am replacing my Bose QC -35's. The noise cancelling is awesome but the sound is flat. There's no bass and treble. I have a set of Air Pods pro that I love the sound. The reason I bought the Beats is because it uses the Apple H1 chip same as the pro. When I put them on they had a balanced sound and reminded me of my Airpods pro.. That's what I wanted them to sound like and they do. Mission accomplished.

I saw reviews that complain about not having a cord for the phone but I've never needed a cord before. I'm not sure if I like not having a power button but time will tell. 1st impression is that they sound very good to me.

Vitali
5.0 out of 5 stars Improved new Beats Solo Pro, Great quality
Reviewed in Canada on June 26, 2020
Color: Dark BlueVerified Purchase
Ok so I own AirPods Pro and here’s my impressions:

Cons: - can’t wear them for too long ; more than 2 hours as it’s compressing my ears, the case is not great looking.

J. Mulligan
1.0 out of 5 stars Skip this headphone!
Reviewed in Canada on May 17, 2020
Color: Light BlueVerified Purchase
Not recommended due to clamping force & comfort issues from extended use; there's no power button so they're easily the worst designed device I own. Volume "button" doesn't always register even though there's tactile feedback. Considering the price, these should be avoided.
Read more
5 people found this helpful
Report abuse