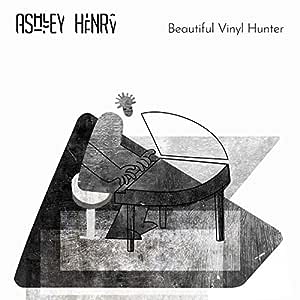 HENRY,ASHLEY (Artist) Format: Vinyl
4.8 out of 5 stars 86 ratings
See all 3 formats and editions Hide other formats and editions
Includes FREE MP3 version of this album.&nbspProvided by Amazon Digital Services LLC. Terms and Conditions. Does not apply to gift orders.&nbspComplete your purchase to save the MP3 version to your music library.

Following the widespread success of 26-year-old Ashley Henry’s Easter EP, the genre-blurring UK pianist returns in full force with his debut studio album Beautiful Vinyl Hunter, set for release in September on Sony Music. Offering a journey into the visionary mind of one of the UK’s most creative young talents, the highly anticipated 15-track album draws on a heady brew of influences from jazz, beats, hip-hop, punk and grime and features collaborations with an impressive collective of innovators including Makaya McCraven, Keyon Harrold, Ben Marc, Luke Flowers, MC Sparkz, Jaimie Branch, Binker Golding and Joshua Idehen.

4.8 out of 5 stars
4.8 out of 5
86 global ratings
How are ratings calculated?
To calculate the overall star rating and percentage breakdown by star, we don’t use a simple average. Instead, our system considers things like how recent a review is and if the reviewer bought the item on Amazon. It also analyzes reviews to verify trustworthiness.
Top reviews

Michael J
5.0 out of 5 stars Ashley Henry's Beautiful Vinyl Hunter is one of the best jazz albums in a decade
Reviewed in the United States on February 4, 2020
Verified Purchase
You love great music, especially jazz, but you've grown tired of so much of the same old, same old? Tired of "waiting for the solo" on most jazz since the late 1990s? Tired of the discordant crap being passed off as "sophisticated"? Wondering what happened to the great jazz musicians who can compose a song you can groove to, play like nobody's business, but serve the music rather than an ego? Took me about 5 years to get my Esbjorn Svensson Trio out of my CD player, then it took a couple years to get Robert Glasper Trio out of it. Ashley Henry has been occupying my streamer / hi-res player since I heard him about 5 weeks ago and I think this album will be worn out for years to come. Every song is addictive. His group plays as an integrated unit serving the music rather than a pianist backed by side-men. His lyricism seems rooted in optimism, intensity, and joy rather than much of the self-loathing identity jazz of late. Beautiful Vinyl Hunter is nominated for best jazz album of the year in the UK. I'd vote for it as best jazz album of the decade.
Read more
One person found this helpful
Helpful
Comment Report abuse

Ralph McNealjr
5.0 out of 5 stars Great CD from beginning to end!
Reviewed in the United States on March 7, 2020
Verified Purchase
Used product because I am a new fan!
Read more
Helpful
Comment Report abuse

RICKROB
5.0 out of 5 stars FANTASTIC WORK!
Reviewed in the United States on January 15, 2020
HEY JAZZ PIONEERS, This is one those recordings that makes an immediate impression on you. His work on keys as well as the arrangements and production are top notch. He uses many influences of jazz past and present and gives own interpretation. Class work! I forgot to mention the fantastic musicians giving him support.
Read more
Helpful
Comment Report abuse
See all reviews

Mr. I. C. Oakley
5.0 out of 5 stars Fantastic melodic nu-jazz keyboardist from London
Reviewed in the United Kingdom on January 11, 2020
Verified Purchase
I was thinking that 2019 was a disappointing year for releases until someone played me this and three tracks in I was here buying it...
Fantastic keyboardist from London backed by some of the other new young London jazz players beginning to really make a name for themselves. An album to me that each track is better than the preceding one. (Have to admit I prefer the instrumentals but I wasn't put off by the hip-hop influences on a couple of tracks) What really makes it for me is its so melodic

R. Seccombe
4.0 out of 5 stars Great album, shame about the scratch
Reviewed in the United Kingdom on December 2, 2019
Verified Purchase
Great album showcasing fresh new jazz talent throughout. Almost like a playlist of styles, never boring and always listenable, no squeaky garden gate showboating. Been listening for a couple of weeks now, great vinyl sound – you have to buy it on vinyl with that title. But I had to return my first one that had scratches on side 4 that made the last two tracks unlistenable. Got my return one within 24 hours, thanks.
Read more
Report abuse

P. J. Aspel
2.0 out of 5 stars A bit bland.
Reviewed in the United Kingdom on February 15, 2020
Verified Purchase
I liked Between The Lines, but the rest of it's pretty samey.
Read more
Report abuse