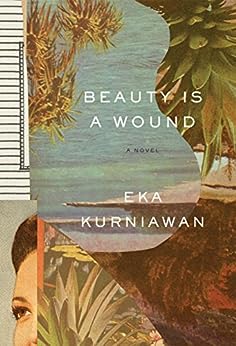 Beauty Is a Wound Kindle Edition

Beauty Is a Wound astonishes from its opening line: One afternoon on a weekend in May, Dewi Ayu rose from her grave after being dead for twenty-one years....  Drawing on local sources—folk tales and the all-night shadow puppet plays, with their bawdy wit and epic scope—and inspired by Melville and Gogol, Kurniawan’s distinctive voice brings something luscious yet astringent to contemporary literature.
Read more
Previous page
Next page

"An unforgettable, all-encompassing epic… Upon finishing the book, the reader will have the sense of encountering not just the history of Indonesia but its soul and spirit. This is an astounding, momentous book."
― Publishers Weekly (Starred Review)

"Brash, worldly and wickedly funny, Eka Kurniawan may be South-East Asia’s most ambitious writer in a generation."
― The Economist

"Without a doubt the most original, imaginatively profound, and elegant writer of fiction in Indonesia today: its brightest and most unexpected meteorite. Pramoedya Ananta Toer has found a successor."
― Benedict Anderson, The New Left Review

"A vivacious translation of a comic but emotionally powerful Indonesian novel."
― PEN America

"Kurniawan’s story of an undead woman had morphed into the story of modern Indonesia, an epic novel critics are more wont to compare to One Hundred Years of Solitude and The Canterbury Tales."
― Sydney Morning Herald

"Kurniawan does not merely traffic skillfully in magic realism; his Halimunda ― like García Márquez’s Macondo and Faulkner’s Yoknapatawpha County ― lets him show how the currents of history catch, whirl, carry away and sometimes drown people."
― John Fasman, The New York Times

"Both Man Tiger and Beauty Is a Wound constitute a retort from the present to the dark times, while also acknowledging that the dark times may not yet be over. Against the killings of those years and the collective amnesia used to blank out the fate of the victims―a kind of second death, as it were―Kurniawan’s fiction summons its legions of ghosts."
― Siddhartha Deb, The New Republic

"Gracefully translated by Annie Tucker, the writing is evocative and muscular, with particularly spicy descriptions and some good wry humor."
― Sarah Lyall, The New York Times

"It’s an astonishing, polyphonic epic, a melange of satire, grotesquerie, and allegory that incorporates everything from world history to local folk talks."
― Phillip Pantuso, Brooklyn Magazine

"An arresting portrait of Indonesia’s struggle for nationhood, delights in obscenity: no topic is spared from its bloodthirsty brand of satire."
― Gillian Terzis, The New Yorker

"Refreshingly, Kurniawan puts value on literature as entertainment, and his books are certainly that."
― Deborah Smith, The Guardian --This text refers to an alternate kindle_edition edition.

Eka Kurniawan is an Indonesian writer and graphic designer.

JONATHAN DAVIS is the founder and chairman of Independent Investor, a specialist financial publishing venture, and a well-known columnist and investment writer. A former business and financial journalist on The Times of London, The Economist, and The Independent, he is a regular columnist for the Financial Times, author of three other books on investment, and a director of three investment companies.

Chicachiflada
4.0 out of 5 stars A deeply flawed world with a family curse to destroy them all
Reviewed in the United States 🇺🇸 on September 27, 2017
Verified Purchase
Love above all is sacred and complex. In Beauty is a Wound we discover the miraculous hunt for love throughout generations, only to realise how fleeting the moment is, how curious the human being can become when the need for revenge becomes all-encompassing.
The writing is convoluted like the plot, with long stretches of historical Indonesian sequences, only to swiftly get back to the "action" of love vs revenge, completeing the circle until the end of the novel.
The characters are sublimely portrayed, each with their own quirks and particularities, uniting them against all odds. I enjoyed the highlight of love between the four widows in thr end, mentioned three times for its importance. Meanwhile and up til that point the vengeful husbands each fighted for their love, family or personal image.
This is definitely a novel transcending simplicity, covering topics like rape, family curses, life and hardships during war, politics and human nature. It calls for discussion on multiple levels and I am looking forward to the "babblingbookclub" questions and debates. This is a must read for those who like complex worlds interspersed with satire and bits of fantasy, where nothing looks like it seems from the outside.
Read more
One person found this helpful
Helpful
Report abuse

Tracey Zeng
3.0 out of 5 stars Dark and twisted, but complex
Reviewed in the United States 🇺🇸 on January 5, 2019
Verified Purchase
2.5-3 Stars. This book made me feel incredibly complicated feelings. It was dark and sad and repulsive in some ways, but also compelling. To me, the novel addressed terrifying aspects of human nature that exist in our actual reality. The descriptions of horror, sexual and physical violence, and loss are reflective of atrocities that take place in our world even now. I completely understand the reviews of people who DNF this book due to some of the subject matter. And I agree at times the violence felt like too much, placed there for pure shock value. But I also understand what the author was trying to do in pressing such horrifying topics throughout the book. Kurniawan draws parallels between the violence of colonialism/war and the violence of misogyny and presents an incredibly twisted tale of how both leave their mark upon generations and generations of humans.
Read more
One person found this helpful
Helpful
Report abuse

Shari's Peculiar Fascination
5.0 out of 5 stars An Amusing and Thought-Provoking Adventure in Indonesia
Reviewed in the United States 🇺🇸 on August 19, 2016
Verified Purchase
This book was a delightful surprise. Classified as Historical Fiction, I didn't expect it to be so entertaining. Yes, I did learn a great deal about Indonesia, circa the late 1920's to current; but there's a little supernatural, romance, crime, war, politicos, and plenty of light and dark humor. The main character, of which all the side stories revolve is Dewi Awu. Colonial rich girl, prostitute, mother, and [spoiler alert] ghost, Dewi Awu is outrageous and hilarious. The many satellite characters in her orbit are quirky and original. Throughout the book, there are dark situations [such as Dewi's time as a POW] that are funny, and funny situations that are ultimately horrific. Eka Kurniawan's writing style reminds me of some of Alice Hoffman's more humorous novels [i.e. "Turtle Moon" and "Practical Magic"]; but Kurniawan is still an original! The book gave me insight into the Indonesian spirit AND provided hours of sheer amusement.
Read more
One person found this helpful
Helpful
Report abuse

mimi anzel
1.0 out of 5 stars Repetative, misogynistic, casual brutality; puerile rape fantasies in the extreme. Disgusted
Reviewed in the United States 🇺🇸 on November 5, 2022
Verified Purchase
Audible. Sorry I paid for it. The accolades suggest that reviewers just want to sell books, and that readers' capacity to recognize literature has fallen to a new low. It may be by an Indonesian writer, but its connection to Indonesia is at best a glancing blow. Trash under the labels of "magical realism" or "historical fiction." I don't think the author can even spell "empathy." Feh!
Read more
Helpful
Report abuse
See all reviews

T E Kingston
5.0 out of 5 stars Outstanding author and gripping read
Reviewed in the United Kingdom 🇬🇧 on January 7, 2017
Verified Purchase
Intriguing read, a magical realist novel this book weaves small town life in rural Java with the supernatural, war, love and sex (there's a big difference between the two in this book) and gives you a historical narrative too. Indonesia is often overlooked but has so much more to offer than Bali. A hefty read but worth the effort
Read more
Report abuse

Claire Patterson
5.0 out of 5 stars Brilliant
Reviewed in the United Kingdom 🇬🇧 on April 14, 2021
Verified Purchase
Absolutely fantastic book, I received as a gift and bought this copy as a gift for someone else because I couldn't stop raving about it.
Read more
Report abuse

Vinicius S.
4.0 out of 5 stars Gabriel Garcia Marques for the strong hearted
Reviewed in Germany 🇩🇪 on July 5, 2016
Verified Purchase
The fantastic reality of Gabriel Garcia Marques was always my favorite subject in literature and Beauty is a Wound capture this lively style very well. The book is composed by connected, and fantastic, stories seasoned with plenty of sex, violence and a bold and fresh critic of the changes in the Indonesian society.
Read more
Report abuse