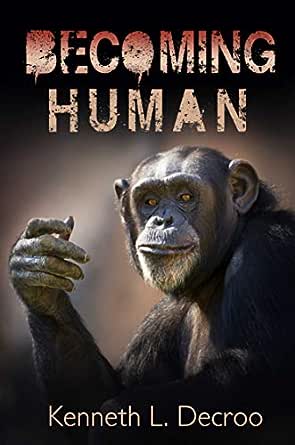 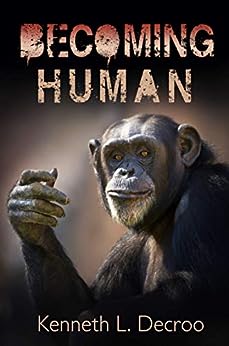 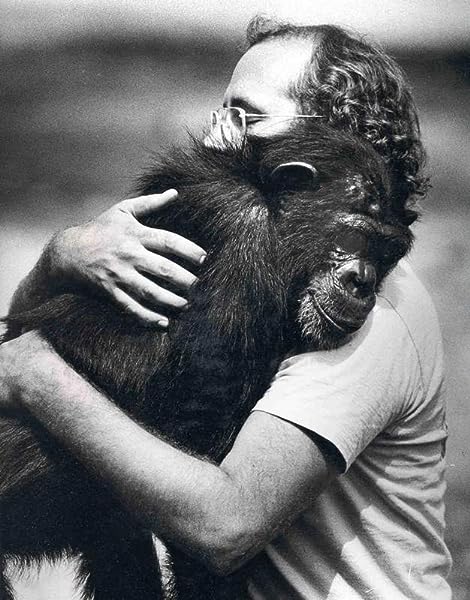 "Becoming Human by Kenneth L. Decroo is a frightening tale of science unguided by ethics, and the devastation that can be wrought by government agencies that operate without benefit of effective oversight. Step-by-ominous-step, the author takes you from the relatively benign environs of Reno, Nevada to the dark menace of the Congolese jungles, to the even more dangerous environs of smuggling dens in Germany and the Netherlands. An eclectic, and all-too-believable cast of characters will hook your interest from page one, and at the end, leave you breathless and looking over your shoulder and wincing at every sound." Charles Ray, Awesome Indies Book Awards.

Jamie Morris
5.0 out of 5 stars Edge-of-your-seat read
Reviewed in the United States on January 20, 2019
Verified Purchase
A thrilling tale that takes us into the Congolese jungle on a mission to find a tribe of chimp human hybrids. Doctors Ken Turner and Fred Savage have two goals; to save their wild animal training center from a university shut down and rescue the hybrids from government agents intent on exploiting them will they succeed in their mission? Becoming Human is fast-paced action, memorable characters and an all-around great story from a masterful storyteller.
Read more
Helpful
Comment Report abuse

bpatters
5.0 out of 5 stars Incredible
Reviewed in the United States on July 28, 2020
Verified Purchase
The mind Ken Decroo has for adding so many twists and turns to this second addition is downright incredible. I feel for all the creatures, human and not. Their lives are a tangle of intrigue and love. And the communication Oliver and Danny learned is beyond incredible. Can’t wait for the next one! Thanks again Ken.
Read more
Helpful
Comment Report abuse

JT
5.0 out of 5 stars The Second Exciting Book In The Series
Reviewed in the United States on July 13, 2020
Verified Purchase
Once again the author has created a book filled with excitement. The characters and scenes are richly defined and often kept me on the edge of my seat. I can hardly wait for the third book.
Read more
Helpful
Comment Report abuse

Amazon Customer
5.0 out of 5 stars Couldn’t put the latest book down and now I can’t wait for the next book!
Reviewed in the United States on February 12, 2019
Verified Purchase
The Almost Human series books are a must read. Hopefully they will end up on the big screen as a movie.
Read more
Helpful
Comment Report abuse

Charles A. Ray
VINE VOICE
5.0 out of 5 stars The tension just keeps getting ratcheted up.
Reviewed in the United States on December 18, 2018
Ken Turner and his friends, after initially thwarting the government’s efforts to find and exploit the offspring of a Russian experiment in human-chimpanzee cross-breeding, find themselves still in a fight, not just for their careers, but their lives, as the power-hungry government agent continues his efforts to capture one or more of the hybrids.
Becoming Human by Kenneth L. Decroo continues the pulse-pounding action begun in Almost Human, moving back and forth between the deceptively serene environment of a politically charged college campus to the steamy dangers of the African jungle. While this one can be read as a stand-alone, I really recommend you read the first one . . . well, first, so that you’re fully in the picture. The author explores some sensitive and controversial subjects, but in a manner that provoked reflection rather than rage.
I received a complimentary copy of this book, and like the first, it did not disappoint. It’s science fiction, but it reads like facts in today’s turbulent world. I give it five stars without hesitation.

AvidReader
5.0 out of 5 stars Even better than the first.
Reviewed in the United States on December 17, 2018
This book is even better than the first. Kenneth has grown as a story teller and as a writer since AIA Publishing published the first book in this series. Becoming Human is a great story, an excellent sequel that leaves you wondering where the series will go next. The themes delved into in book one are developed further and it all moves at a pace that is not too breathless, but never lags. I highly recommend this series, which I think has broad appeal. It’s not too nasty for those who like to sleep at night, has an interesting and highly relevent topic of ethics in scientific research and government agencies, and a great cast of colourful characters.
Read more
Helpful
Comment Report abuse

Maria Jansson
5.0 out of 5 stars A real intense page turner
Reviewed in the United States on February 10, 2019
This is the sequel to “Almost Human”. I recommend reading “Almost Human” first. This book starts just where the first book ends. It would make more sense to read both books. They are both page turners, and almost impossible to put down. The story about a science experiment gone bad feels very real. The characters are trustworthy. It’s obvious that the author is familiar both with big apes, and the geographic locations in the book (Nevada, California, Germany, and Africa.) I loved “Becoming Human” and can highly recommend it.
Read more
Helpful
Comment Report abuse
See all reviews