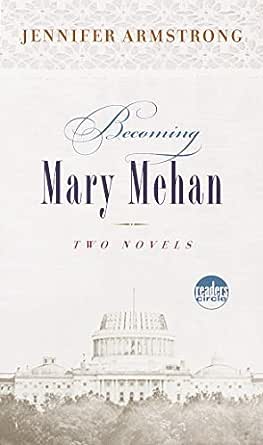 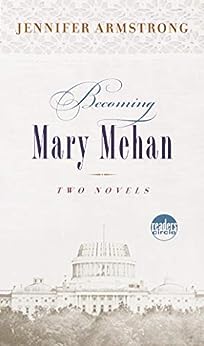 A two-in-one, Readers’ Circle edition of Jennifer Armstrong’s acclaimed novels of the Civil War and its aftermath.

From the Paperback edition.

Jennifer Armstrong's two masterful novels about Mary Mehan are now together in one volume. Set against the pivotal events of the American Civil War, The Dreams of Mairhe Mehan depicts an Irish immigrant girl and her family, struggling to find their place in a country at war with itself. In a starred review, Kirkus Reviews said, "Armstrong mixes vision and reality with breathtaking virtuosity, salting Mairhe's narrative with poetic turns of phrase, snatches of song, story, and history."

Mary Mehan Awake takes up Mary's story after the war when, much like the broken country, Mary must begin a journey of emotional and physical renewal. Of this book, The Horn Book Magazine said, "The story unfolds effortlessly and richly. It's The Secret Garden for an older audience, with friendship and nature gratifyingly providing healing and wholeness."

This new Readers' Circle edition includes an interview with the author discussing her ideas about how history is remembered and recorded, and the obligations and opportunities of the historical novelist. --This text refers to the paperback edition.

Ever since the first grade, Jennifer Armstrong knew that she would become an author. She loved making up stories and sharing them with others. Her family treasured books and this led her to become an avid reader of all types of fiction. It was no surprise when she chose to study English and American Literature at Smith College in Massachusetts.

Armstrong is the author of over 50 books for children from kindergarten through high school. Best known for writing historical fiction, she has also been successful in
creating picture books, easy readers, chapter books, young adult novels, as well as nonfiction.

Armstrong, who grew up outside of New York City, now lives in Saratoga Springs, New York.

Jennifer Armstrong is the winner of the Orbis Pictus Award for Outstanding Nonfiction for Shipwreck at the Bottom of the World. Many of her books have been designated as Notable Books by the American Library Association and the International Reading Association.


From the Hardcover Library Binding edition. --This text refers to the paperback edition.

A two-in-one, Readers’ Circle edition of Jennifer Armstrong’s acclaimed novels of the Civil War and its aftermath.
--This text refers to the paperback edition.


Two Federal soldiers stumbled out of a whorehouse on North Capitol Street, drunk as lords. One, a short sort with ginger whiskers, leaned over and began to puke in the gutter, and Mike, who was passing, began to laugh.

"Happy New Year to you," he said. He stamped through a puddle of muddy slush.

The one who could still stand stood still, and fixed Mike with an evil eye. "You damned Irish nigra. Get out of my way."

Mike bowed, and he knew the man would have at him, so he bulled forward, swinging his brickie bag to catch the soldier on the chin. All in a moment the man was on his back in the icy street.

Ginger stood up, stared at Mike, and then at his friend. "Boys!" he called over his shoulder.

The whorehouse door opened and a gust of infantry blew out with noise and whiskey fumes. Mike, ever a dancer, judged his card was too full and skipped away whistling, but the sounds of pursuit reached him and he began to run, down a dark alley, over a dung heap, vaulting a fence. A dog snarled out and slunk away and the wind sang in Mike's ears, and the light laugh rang out of him and ahead in the dark another noise began: glass breaking, a harlot shrieking, men laughing.

With unsteady breath and the grin of all devils, Mike pressed himself to the wall, and stole a view around the corner. Baker's boys, the Capital Police, were throwing bottles into the ashyard from the back door of another whorehouse. The smell of the liquor filled the cold air like the smoke of a battlefield, and a broad bawd screeched like a banshee and kicked men's shins.

Mike crept closer to the scene, well in the shadow, while the bottles burst like shells all around him. And when next the detective chucked a bottle over his shoulder, Mike sprang out and plucked it from the air and was gone again in the dark without breaking stride and the fellow looked back at the absence of smash.

Mike! Mike! The valorous fox, caparisoned horse, the dancer, the poet of deeds!

And so with a bottle he jigged his way back through Washington to Swampoodle, and there he found me, dreaming in my chair.

"Mairhe, girl, light us a fire, it's cold as the grave," he said, uncorking his bottle.

And I with my knees tucked up, and my black hair all down my back like a blanket, looked up at him with his glittering eyes. His throat moved as he swallowed.

I put aside the lace I was making, and stood and took his dinner from the shelf, and set it before him and stood and watched him eat. Mike attacked his meal like any wolf does. Between his bites and his parleys with the bottle, he told me of his day's work at the Capitol.

"And it was that cold the mortar hardly held, and the bricks like old kings' bones in your frozen hand, and the site boss was mad as a hornet for three men joined the Army last night and never came to work."

Mike regarded me. "Fools how?"

"I know it, Michael Mehan. I've seen myself in the glass."

"And cannot have a political opinion in your head, so don't talk about things you don't know. The rebs--"

He held himself upright in the doorway, and aimed one finger at Mike. "And why shouldn't the South break away? I ask you. Lincoln's no better than the English Crown, forcing itself and union onto Ireland."

Mike swung the bottle by the neck, his eyes on Da. "Ah, but now they say it's a war to free the slaves."

"Letting those blacks free will only drive down our wages," Da muttered, his eye following the bottle's arc.

"Of late? I like that!" Mike shouted back, banging the bottle onto the table so hard that a gulp of whiskey pitched up through the neck and wet Mike's hand. "Late last summer, was it? You and your wild temper'd have us living in the street!"

"Don't temper me! Don't you temper me! No son of mine shall speak to me this way!"

"What'll you do, beat me? I'm not a child any longer, you're not stronger than me any longer!"

Da was white with rage. "In Ireland--"

"In Ireland? God help us!" Mike groaned. "What'd you bring us to America for, you crazy drunkard, if you love that country so much?"

And a thumping on the floor below us began, and a dog barked at the yelling and someone scolded in Gaelic. On the other side of the wall, someone coughed and cursed.

"Mike!" I stepped before him, and placed my hand over his eyes. I could feel them moving beneath my hand, could feel his angry breathing on my hand, and I whispered, "Go out."

He moved away from me, and headed for the door, but as Da took a step toward the bottle, Mike reached back and plucked it away. Da stood reaching for the empty air, and Mike was gone.

"Oh, my girl," Da said, easing slowly into a chair. His hands shook. "I've come a most unexpectedly long way down. Back in Sligo the Mehans were respectable, but then the Hunger came and who could stop it, then?"

"I know, Da." I straightened his coat, and he leaned back his head, his gray hair spilling over his collar like the strings of a broken harp. "I know."

"And where has your brother gone?"

I closed my eyes, and could see him in the street, clapping hands with his friends, linking arms with them as they began to march. --This text refers to the paperback edition.
Read more

Ashley
4.0 out of 5 stars A Historical Keeper
Reviewed in the United States on December 21, 2003
This book is actually a 2-in-1 and the way it's told is absolutely great.
The first part, "The Dreams of Mairhe Mehan", tells of an Irish immigrant girl with her brother caught up in the Civil war and her father losing his mind. She is the one making the living working in a bar in the Irish slums of Washington D.C. She waits for her dear brother to return from the war...but when he doesn't she is broken. Her only choice is to turn to help the wounded in war.
This first novel leaves you sad and feeling sorry for Mairhe and at times I had put this book down because it was dragging a little.
But the second novel, "Mary Mehan Awake", is superb. This one I couldn't even stop to eat until I had read the entire thing. This is where, told not in her point of view as the first was, told in a narrative form. And as the author puts it, "I knew she could not narrate the sequel because sleepwalkers cannot narrate stories." The war has cut her deeply and she seeks refuge in New York, a pleasant setting compared to the bloody soldiers in Washington D.C. Here she works as a servant in a household. But it's a great place where she even finds someone to help her become awake again.
This is an amazing story with even a more amazing ending. It will leave you happy and contented, just like Mary.